Dear Jeff: I Am The Democrats’ Best Option

(This is a letter I wrote to Jeff Pearlman, who writes the blog “www.crazydana.com.” He posted it on his site.)

I’ve been reading your comments about the race. I don’t gloat in the predicament the Democrats find themselves in. As I told you when we met a few months ago, I’d rather see one of the Democrats than Dana.

He has no business representing our nation. He enables the worlds most dangerous dictator, Vladimir Putin — a man that imprisons, and tortures and poisons dissenters, a man that banned sick Russian orphan children from being adopted in America.

But I agree with what you and virtually every political pollster and Democrat leader have been saying: A Democrat can’t win unless a bunch of their candidates drop out. And a bunch of Democrats are not going to drop out. There will be NINE of them on the ballot.

Because of that, I believe a vote for one of the Democrats is a vote for Rohrabacher or Baugh.

The 2016 primary, a Presidential primary which is always has a larger turnout than a midterm, had 71,000 Democrats and 93,000 Republicans voting, respectfully. Let’s assume 85,000 Democrats will vote in the June primary. (I’ve run this number by three well respected national consultants/polling experts, and all three, based on history and recent national turnout, think the number is too high.)

But let’s use it anyway. And let’s divide the 85,000 votes by the 7 viable Democrat candidates, perhaps giving one frontrunner 30%, which would be quite a feat. That candidate would receive 25,500 votes. I realize that any of those Democrat candidates or supporters reading this firmly believe they/their candidate will be the exception and get 40% or higher. Of course, this is part of the reason none of them will get out. There are many possible scenarios; let’s give two of the candidates 35%. Here, each would receive 29,750 votes.

The Republicans will have around 100,000 voting in June. You have an incumbent and an OC GOP insider. Both with money. Both with expertise. Both incredibly connected. Then there a few other far right-wing candidates.

Then you have the candidate who was encouraged last summer by a former Obama senior staffer to enter this race because, as he said, it’s a moderate Republican district and I’d have a unique voice, versus Rohrabacher or someone who only appeals to the extreme-right fringe of part of the party.

Given the math above, I think the Democrats might consider asking themselves one of those “lesser of evils” questions. Namely, “Who would you rather have as your Congressman, Dana Rohrabacher, Scott Baugh, or Paul Martin?”

Hey, I get how disgusted Democrats are with the GOP. Trust me, I’m lambasted all day long for being “one of them” You should see my Twitter feed, just today.

But I’m not one of them.

When asked to share a bit of my background, I remind voters that ending  physical, emotional, and spiritual suffering has been my life work:

I also ask voters to take a closer look at my positions, during the campaign:

I’ve told some Democrats recently that while Scott Baugh is clearly not an acceptable choice for them, should he slay the giant, at least they will have someone loyal to the interests of our great nation, as opposed to our greatest foreign adversary.

I can’t count how many lifelong progressives are donating to my campaign, volunteering, etc. It’s humbling. For every one of them, there are countless Independents and moderate Republicans that, like the Obama staffer had said, are thrilled to finally have a centrist alternative.

Like you, like the countless local and national pundits who write about how the Democrats are splitting the vote, like local Democrat leaders including Fran Sdao, my Democrat supporters believe the vote will be split, and fear that two Republicans far-right Republicans will advance.

So instead of rolling the dice on Baugh or Rohrabacher, they are endorsing my campaign. 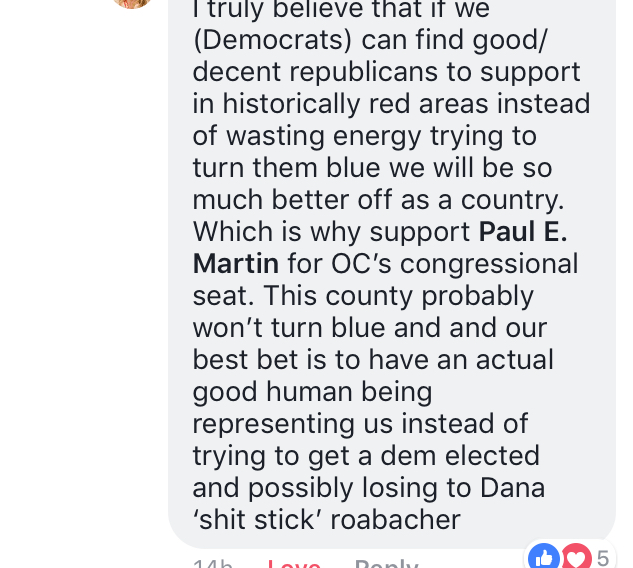 Like I said when we first met, I’d rather have one of the Democrats than Dana. He is utterly unacceptable.

But, like many believe, including yourself, the numbers don’t add up.

I include my official Candidate Statement below. Yes, I want to reform the Republican Party. And I’m working to bring that about, even at the risk of crazies on the extreme right deeming me a “liberal.”

P.S. I think you’ve visited my website, but if not you can at www.paulmartinforcongress.com.

I want to reform the Republican Party. Because for decades, GOP bureaucrats have failed us. They have politicized serious issues that affect all Americans. Today, the GOP has an identity problem. In order to stay relevant, the party must change.

I am a pro-growth strong fiscal conservative who will work for lower taxes and a smaller federal government. President Reagan’s axiom “peace through strength” is my guideline for national security. I will stand-up to Russian president Vladimir Putin and any other enemies of America who attempt to undermine our democracy and freedoms.

But protecting children through common sense gun safety, advocating for a cleaner planet so we can all breathe clean air and enjoy clean water and coastlines, and working to help prevent rising homelessness — these are not “liberal” issues. And though I am a lifelong gun owner, I am willing to confront the NRA — our moral duty is to protect our children. I will also defend the rights of seniors, the underemployed, minorities, the poor, and younger voters.

I have worked as a businessman, philanthropist, Christian pastor, and writer. I have always championed values of personal responsibility, compassion for those in need, and a belief that all share a calling to make our world a better place.

I am an Orange County native and lifelong Republican. I hold a B.A. from UCLA and an M.A. from Biola University. I am happily married to Gina. We live in Costa Mesa with our 5 amazing children, ages 22, 19, 18, 17 and 16.