“What issues will resonate with voters?”

Candidates spend a lot of time asking this question. So we talk to voters. We watch the news. We accumulate data to find “winning issues.”

Research is a big part of campaigning. REALLY BIG. You need to craft a message based on issues that will be popular — popular enough to get enough votes to win.

The political term for this is populism.

In an ethically ideal world, every candidate would work hard to reconcile his or her own convictions with the popular ones — make sure you actually believe what you say you care about. In my candidacy for United State House of Representatives, I am running on my own convictions.

I have yet to purchase any polling data.

Some of my views, in fact, collide with those of my own party. For example, I’m certain our representatives in Congress should do more to decrease senseless gun violence in America. It would save lives. Parents wouldn’t be afraid to send their kids to concerts. Or, school.

But, as weird as it might sound, gun safety is not a popular Republican issue. It’s the opposite. The NRA is the biggest special interest group in the country and they spend countless millions of dollars getting Republicans elected and fighting virtually every bill to regulate firearms.

I’ve angered lots of fellow Republicans — those in my own party — over my stance on gun safety.

But I don’t’ care what the Republicans think. I don’t care what the polls say. As a U.S. Congressman, I believe it would be my solemn duty to keep innocent people safe. Especially children. (Since 2013, there have been over 200 school shootings in America — an average of nearly one a week.).

Today is the special election in Alabama for United States Senate. And for months, people around the country have been hearing about Roy Moore — his positions, his views, the issues he is running on. They are learning about a man that claims to be running as an Evangelical Christian, and who is informed by the teachings of the Bible.

1. He doesn’t really believe his positions but thinks they are popular “winning” issues that, based on research, will get him elected.

2. He actually believes his positions as a matter of personal conviction.

So here are a few of the positions of Roy Moore.

Regarding LGBT issues: “Homosexual conduct should be illegal, yes.”

After equating homosexuality with bestiality, he said his position was “a moral precept upon which this country was founded.”

At a recent Moore campaign rally, one of the few African Americans in the crowd asked when the last time he thought America was great. Moore responded, “I think it was great at the time when families were united — even though we had slavery — they cared for one another…. Our families were strong, our country had a direction.”

When asked if Obama was born in the U.S., a claim that delegitimizes our nation’s first African American President, Moore said in 2016, “My personal belief is that he wasn’t.”

When asked about evolution, Moore claimed: “There is no such thing as evolution…”

The list of Moore’s campaign positions seems endless. Just a few days ago he said, “Now we have blacks and whites fighting, reds and yellows fighting, Democrats and Republicans fighting, men and women fighting.” Yes, he said “red” and “yellows.”

Perhaps most notable is his view that getting rid of constitutional amendments after the Tenth Amendment would “eliminate many problems.”

For those unsure about what Moore’s vision would look like, Amendments adopted after the 10th include the 13th, which ended slavery, the 15th, which prohibited federal and state governments from denying citizens the right to vote based on “race, color, or previous condition of servitude,” and the 19th, which allowed women to vote.

Some are wondering why would Moore repeatedly campaign based on a message of homophobia, misogyny, and racism.

So why would a political candidate risk offending millions of Americans that deem such positions backward at best and evil at worst?

It’s pretty simple: the candidate believes his positions are true or he believes voters do. Or, both.

But here’s the most important thing. Whether Moore believes the things he says or not, millions of voters in Alabama want to elect him into office, including President Trump.

As a citizen of the U.S., as a candidate for Congress, and as a Christian, I see Moore’s positions as problematic.

But win or lose, the problem isn’t Roy Moore.

The problem is hate. 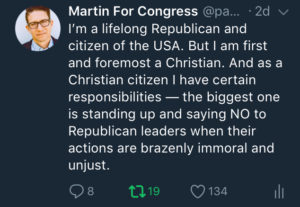 Learn more about my campaign HERE.
« Laying On My Stomach, Staring At Jesus» Dear Elliot (Part I)