Arrows From Left And Right: Day 35 In The Life Of This Candidate For United States Congress.

December 6, 2017 By paulosophia in Politics, Uncategorized Tags: my life, politics

One minute, “You are a f***ing liberal piece of “s**t pretending to be a Republican get a f***ing life!

Then the next, “How sick you to be in the dRump racist party that promotes pedophiles and wants to rob from the poor?”

Just over a month ago, I launched my campaign for U.S. Congress. I knew what I was signing up for. Speaking my mind isn’t new to me. Neither is criticism.

Of the 8 Democrats running in this race, I’m certain they don’t get castigated by fellow Democrats for being Democrats.

And Dana Rohrabacher, my Republican opponent, isn’t being chided by Republicans for being a Republican. In fact, despite mounting investigations against him for his ties to Russia — the OC establishment Republicans are 100% behind him.

So what’s the difference with me? Why do many on both sides find trouble with my candidacy?

I am a centrist.

In no particular order…

I’m not afraid to call that hypocrisy. Nonsensical. Groupthink.

I refuse to parrot the groupthink of my own party.

I feel the same about Russia’s interference in our election, and the investigation. I want to get at the truth. If Trump is cleared, great. If he’s found guilty of obstruction or collusion, great.

And I’m not afraid to tell the Democrats that virtually every offer they make to better our nation is one that will result in the expansion of the federal government, increased bureaucracy, and higher taxes ffor everyone. They want to make government bigger, and we would be the ones to filp the bill,.

What matters is truth. 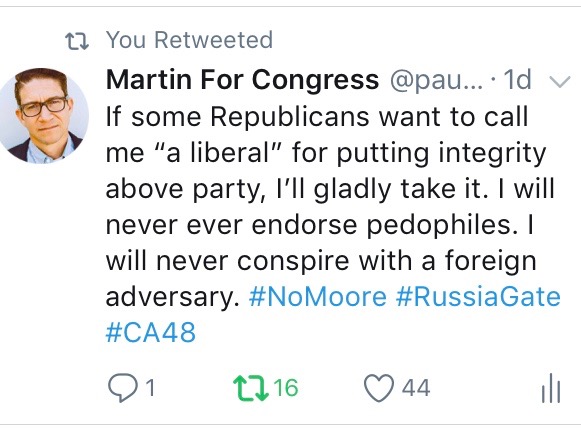 My mother, who never shied away from inserting a saying at the apt time, was right: Birds of the same feather, flock together.

I think the saying works okay for pigeons and penguins; I don’t think it’s working really well for Republicans and Democrats.

Birds of a different feather, sometimes, need to flock together.

We need more people to think for themselves, to become centrists.

I’m that kind of candidate — a centrist, and the only one in this race.

If you support this kind of vision, please click here to endorse, pledge, learn more!

« Islam: Bush Versus Trump.» Laying On My Stomach, Staring At Jesus