Happy Birthday Paulosophia! And I Was Only Being Honest.

September 22, 2017 By paulosophia in Uncategorized Tags: my life, philosophy, politics 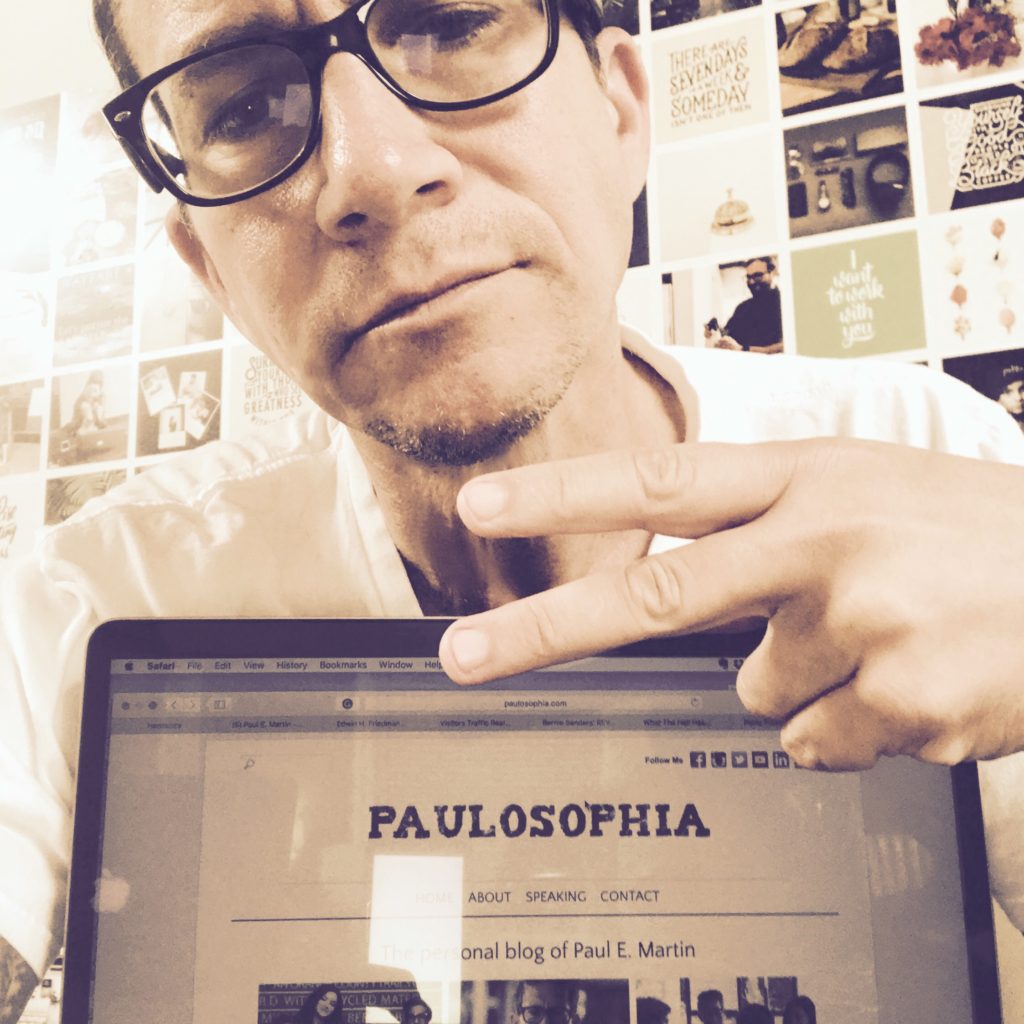 “Yeah, they just don’t know why you are so obsessed with all these political issues. And I have to agree, what’s gotten into you, man?”

Nothing has gotten into me.

When I launched Paulosophia exactly two years ago, I decided to get stuff out of me — my ideas, to be precise…

A friend called me a few months ago. “Hey, Paul. Hey, I just wanted to let you know that a lot of people are talking about you and what you’re writing about. They’re kind of pissed.”

On the the two-year anniversary of this blog, I remember the two commitments to myself, that I’ve stuck with, and even stick with as I type now.

First, I would write down my unedited thoughts. I would be real. I would not try to impress or please or appease or win anyone.

My fingers would type the exact thoughts, literally.

Paulosophia would be about me. My thoughts. My views. My convictions. A ferocious effort to understand what I think. Not you. Not them. Not Christians. Not atheists. Not Democrats. Not Republicans.

Hence, it would be my art. My creation. My Picasso. My Chaggal.

Second, I would not acquiesce to a big temptation — to impress intellectuals. I would write in everyday language — the kind most people use when they talk to friends. I wanted to be like Socrates. Roam the community. Ask questions. Provoke. Get people thinking, even if it means if the masses didn’t like it.

Nobody really thinks much anymore.

(Just now I thought about how Bob Dylan and Steve Jobs and Saint Francis are three lives I greatly admire. They knew who they were. Mavericks. They didn’t take polls. Popularity wasn’t their jam. Like them. Hate them. Love them. Despise them. They wouldn’t care.)

Like me. Hate me. Love me. Despise me. But unlike Dylan and Jobs and Francis, I do care what people think about me.

Crack open my skull so anyone interested could see, for better or worse, what’s there.

“Just your tone sometimes is distasteful, if I’m honest.”

Echoing in my mind as he calmly rebuked were two thoughts.

First, Yes, the thoughts that swirl around my head are, without question, distasteful.

Second, Picasso: Ah, good taste! What a dreadful thing! Taste is the enemy of creativeness.

Do you get the point? This is my canvas.

Sometimes I go back and read what I wrote. I haven’t always agreed with what I’ve written. Does that sound strange? It just means I’m not certain of the many of the things I think about. I have arguments in my own head. I debate myself.

Are you certain of your own views? I often look back and wonder if I still agree with myself.

I’m certain of two things I’ve written of. First, bigotry is the evilest of sins, and that it’s on the rise. Second, when it comes to combating bigotry, I don’t care about being nice.

I didn’t know Joni Mitchell two years ago. Then, somehow, I happened upon her classic, Both Sides Now. And I listened and listened and realized, again, that I know almost nothing about writing.

At about that time, I saw a post by my friend, Eden — a photo of Joni on her Instagram page. I ripped it off and posted it myself. Because the quote made me think of why I started this blog. 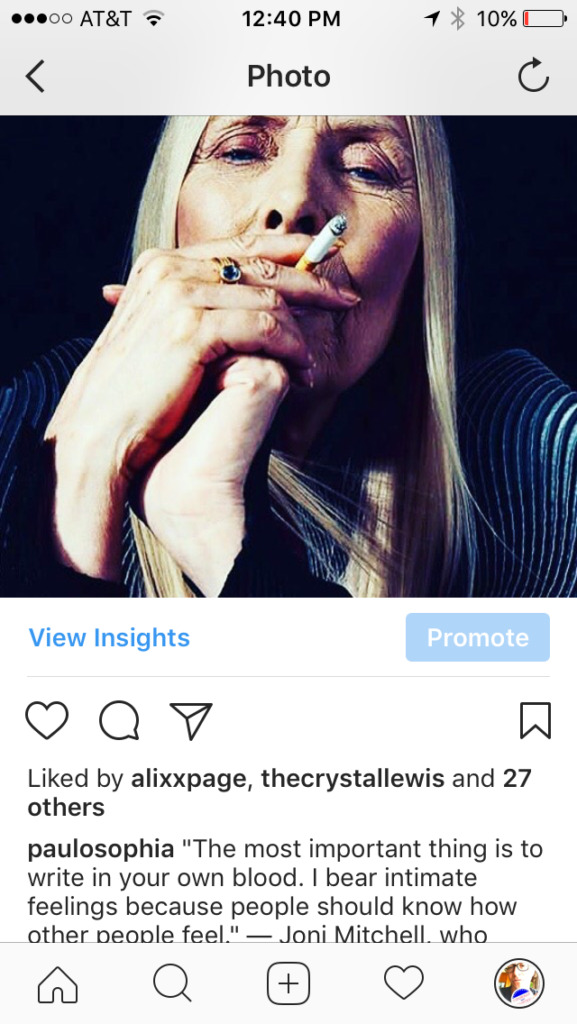 Mom had a sudden and devastating hemorrhagic stroke at around the time I launched this blog. I decided to get real about grief. Not just the grief I saw in my comatose mother — the grief that remained in the depths of my soul from my divorce.

I wrote about how I had been brainwashed by name-it-and-claim-it preachers. I titled the post, Coming Out Of The Closet On The Limits Of Faith. If you haven’t read it, I think you probably should.

It’s been shared over 1,000 times. For me, that’s a lot. And it tells me that so many people out there are hurting inside, and they realize that there are no quick fixes for heartache.

Old acquaintances from around the world started getting in touch with me, thanking me. Some are devout Christians. Others have left the faith.

“Thank you so much for just laying it all out there.”

Hundreds have encouraged me to keep going.

Back to the rebuke: “Dude, you sound angry at times and arrogant.”

I am angry at times, and, sadly, arrogant.

Let me conclude. I’m a copycat. I’ve been influenced by true brilliance. I went and studied philosophy in my 30’s and 40’s because I knew how little I knew. And much of what I write, I’ve stolen.

Ray Bradbury. Not a philosopher. But a prophet-wordsmith-sage. Fahrenheit 451. The book is about book burning, censorship, trying to get people like me to shut up.

Please read these two quotes, if you want to see where some of my vision came from.

And please forgive me if I’ve offended you.

I was only being honest.

“The point is obvious. There is more than one way to burn a book. And the world is full of people running about with lit matches. Every minority, be it Baptist / Unitarian, Irish / Italian Octogenarian / Zen Buddhist, Zionist/Seventh-day Adventist, Women’s Lib/Republican, Mattachine/FourSquareGospel feels it has the will, the right, the duty to douse the kerosene, light the fuse. Every dimwit editor who sees himself as the source of all the dreary blanc-mange plain porridge unleavened literature, licks his guillotine and eyes the neck of any author who dares to speak above a whisper or write above a nursery rhyme…

“In sum, do not insult me with the beheadings, finger-choppings or the lung-deflations you plan for my works. I need my head to shake or nod, my hand to wave or make into a fist, my lungs to shout or whisper with. I will not go gently onto a shelf, degutted, to become a non-book.

“All you umpires, back to the bleachers. Referees hit the showers. It’s my game. I pitch, I hit, I catch. I run the bases. At sunset I’ve won or lost. At sunrise, I’m out again, giving it the old try.

P.S. To my many Christian friends, I am a writer that happens to be a Christian; not a Christian writer. I hope that distinction makes sense to you.