I’m Not Leaving America, No Matter What They Say. 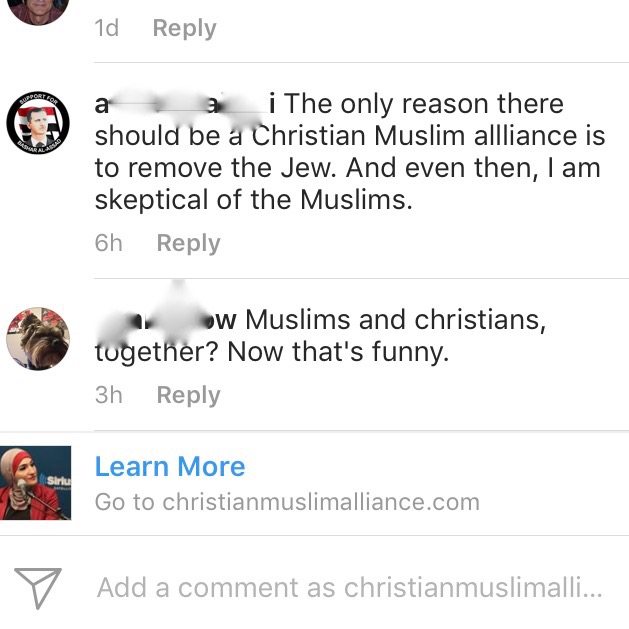 I started The Christian Muslim Alliance earlier this year. Hate crimes were on the increase. Division was growing.

Something needed to be done.

No. We do not believe in “Syncretism,” or a fusing together of different faith systems. Christianity and Islam, in short, are not the same.

Our goal was to help people understand the 1.6 billion Muslims in the world, overwhelmingly, are not violent. And given Jesus’ example of welcoming all people,  we believed that Christians, especially, should be the leaders in promoting the welcoming of others.

I always knew the world has its share of hateful people. We all know that. I can be hateful sometimes. But some take their hate to the extreme of physical violence, while others “just use words.”

But I never really expected what I’ve seen in the past few weeks. Again, the goal of The Alliance was never to merge Christianity with Islam. But with over 5,000 Muslims serving in the U.S. armed forces, and with over 3 million law-abiding Muslim Americans living here, it seemed to make sense to find ways to promote peace.

In any event, here are just a few of the comments I’ve received in the past week or so:

– “The only reason there should be a Christian Muslim alliance is to remove the Jew. And even then, I am skeptical of the Muslims.”

– “Get the f**k out of our country and live in Saudi Arabia.”

– Regarding American Muslim peace activist Laura Sarsour: “The cockroach i need so pest spray some of asad gas would work on her.”

– “You should go to Syria and hug it out with ISIS. It’s not like your head had anything in it worth keeping.”

I only cite these to share what many people think. This hatred is real. And we all need to find ways to combat hate because those views do not represent the heart and spirit of America.

I hope you are active in trying to find ways to promote peace, in your family, in your community, in the world.

If you want to help us, click here to take action.

« This Christian American Republican Is Mad As Hell.» Do You Have To “Know Jesus” To Be Saved?