His last words: “Tell everyone on the train that I love them.”
Lots of people ask me about my new venture The Christian Muslim Alliance.
They ask me, “why?”
It’s because not too long ago my eyes were opened to a reality: the reality of rampant and common hate.
I’ve seen friends who are targeted online because they adopted black children.
I’ve seen White Supremacist presence in our local (Christian) schools.
And last year my eyes were opened to the reality that, in our country, Muslims have it worse.
They are the ones most alienated, the ones most generalized as “dangerous.”
When my work began last year, I began to get messages from lots of people. Some commended me, but many chastised me. Tried to enlighten me about how Islam is a “religion of violence.”
Many of these people were Christians.
I don’t know. I’m sitting in some posh office right now, working on completing our website. There’s some nice piano music in the background. People down the hall are laughing.
I’ve taken zero risks.
But three guys did last week. They stood up to the very kind of hate we are trying to prevent. Face to face.
Two of them were killed for it. Slashed in the neck. Ricky John Best (53) and Taliesin Myrddin Namkai-Meche (23). Best was a veteran, married and a father of four. Namka has recently graduated from Reed College with a degree in economics.
The murder’s name is Jeremy Joseph Christian. He was very active in the Alt-Right movement.
One of the Muslim girls, Destinee Mangum (16) said, “He told us to go back to Saudi Arabia and he told us we shouldn’t be here, to get out of his country.”
The murderer said in court yesterday:
“I call it patriotism.”
He also said, “See where liberalism gets you.”
There was one survivor, Micah Fletcher (21). Reports say the blade was one millimeter from killing him.
He spoke up for the kind of love and peace The Alliance will exist for:
“The Muslim community, especially in Portland, needs to understand that there are a lot of us that are not going to stand by and let anybody — whether they are from here or not — scare you into thinking you can’t be a part of this town, this city, this community, or this country.”
And the grieving mother of Namkai-Meche, wrote a letter.
Her son is now a martyr who tried to protect two Muslim girls from a new kind of hate, one unlike any I’ve seen in my lifetime.

If you do nothing else today, please read this grieving mother’s letter to President Trump.

And pray for their devastated family.

You can see by this photo taken at the vigil, that this family knew something about love. 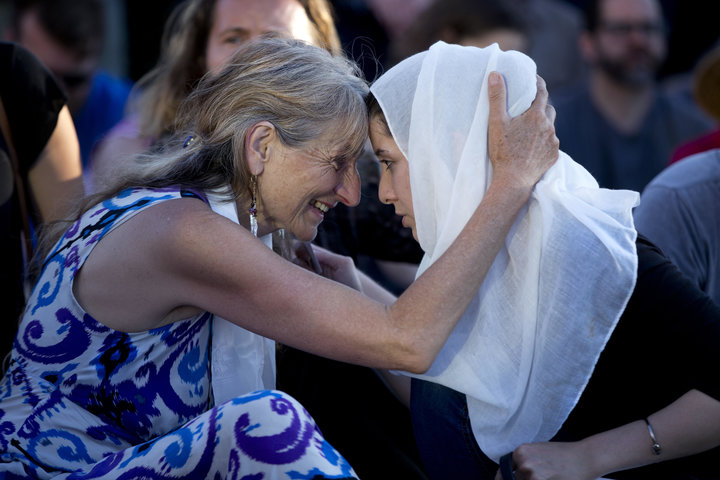 If your heart is pulled, consider getting involved in efforts to educate people against bigotry and hate.
« Hot Yoga Class #500 Is Today.» Friday Freewriting: What Will She Become?, “God Will Take Care Of It,” My First Trendy Tennis Shoes.