May 26, 2017 By paulosophia in Religion, Spirituality Tags: my life, philosophy, religion, spirituality

I’m sitting here listening to Miss Sarajevo by U2. That song is so stuck in my head and I’m playing it on repeat, really loudly. 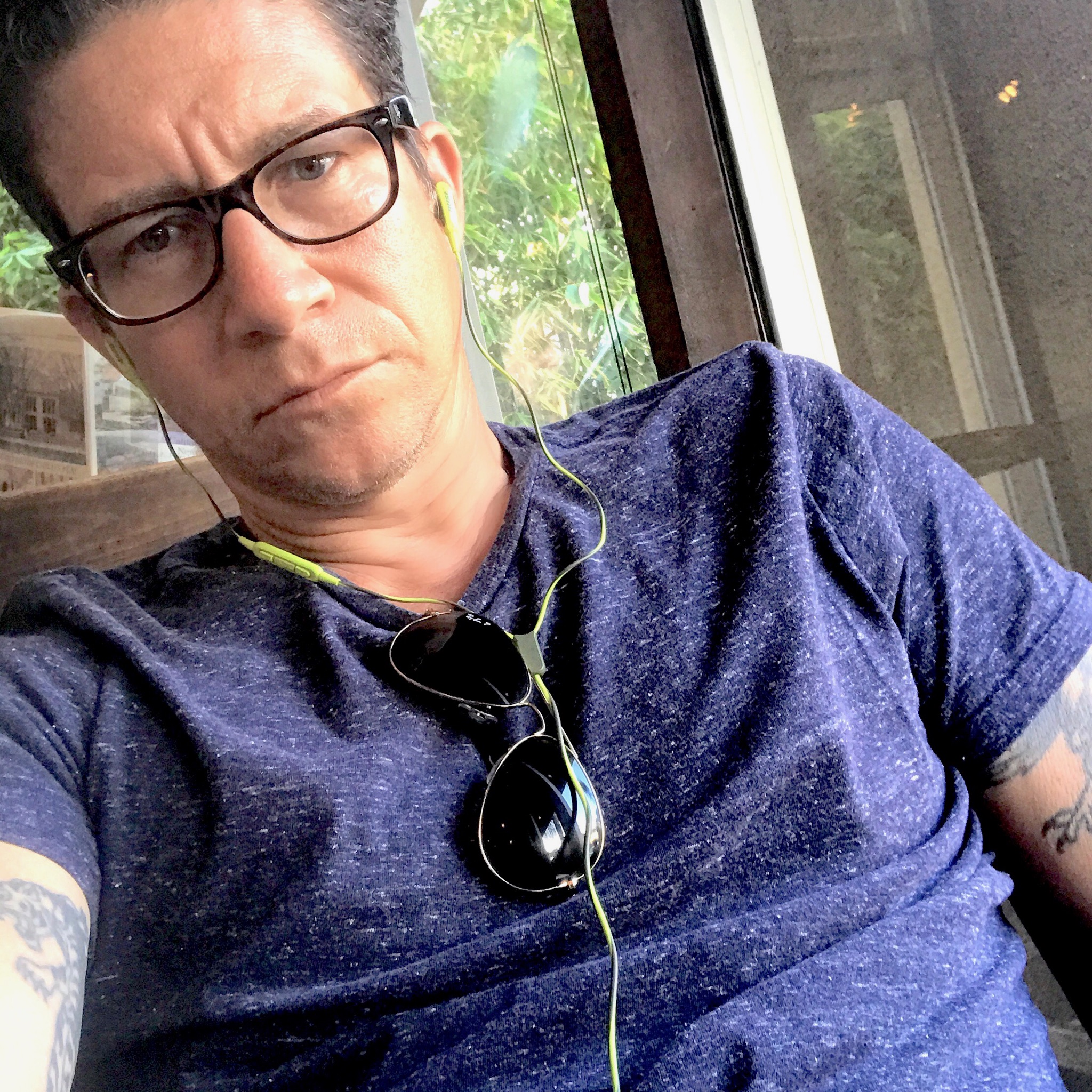 Yesterday I took my 499th hot yoga class at my studio, Yoga Tribe. Today I will take my 500th class. It’s the candlelight class. Kelly teaches it.

I knew almost nothing about yoga before I took that class nearly 8 years ago. I stared taking classes, always late in the day. For a while, I thought namaste was a clever spiritual Spanish-English blend saying: no mas day. No joke.

I thought yoga was merely about bending your body in peculiar positions. Like putting your leg around your neck. You’ve seen all those photos.

I thought yoga was weird. Maybe you think it’s weird.

Probably because my busy mind just must find ways to simplify things. Give my mind rest because it’s always churning away thinking too much about too many things. And my life was in crisis when I took that first class in 2009. I thought I had fibromyalgia back then because of chronic pain in my legs and back. Daily chronic pain. Trouble sleeping every night. I’m not exaggerating at all.

Anyway, yoga is only about your body and your mind. That’s it. Those two things. But throw in Bible verses and God, then you’ve gotta manage three things:

And that’s more complicated. For me at least. Two is more simple than three. Ockham’s Razor.

So if I want a Christian spiritual experience I can do Lectio Divina or go to church or read my Bible and pray.

Some Christians probably think less of me for admitting to all this. We all fall into dualism. Either-or thinking. It goes back to Plato. Religious people like to separate everything into one of two categories: the sacred, or the secular.

So yoga, since it’s not Chrisitan, and especially because it’s spiritual, is frowned upon.

You’re supposed to get your spiritual experiences through overtly Christian activities. For some reason being in nature is okay for most Christians. I like doing nature about as much as yoga. I recently went to Joshua Tree and had quite the natural experience. I wrote about it here.

But I’m no dualist. I think anything that makes you a better person is good. Even if it’s not overtly Christian. Thomas Aquinas thought so, too.

Some guy is wearing a shirt with the number 97 on it. 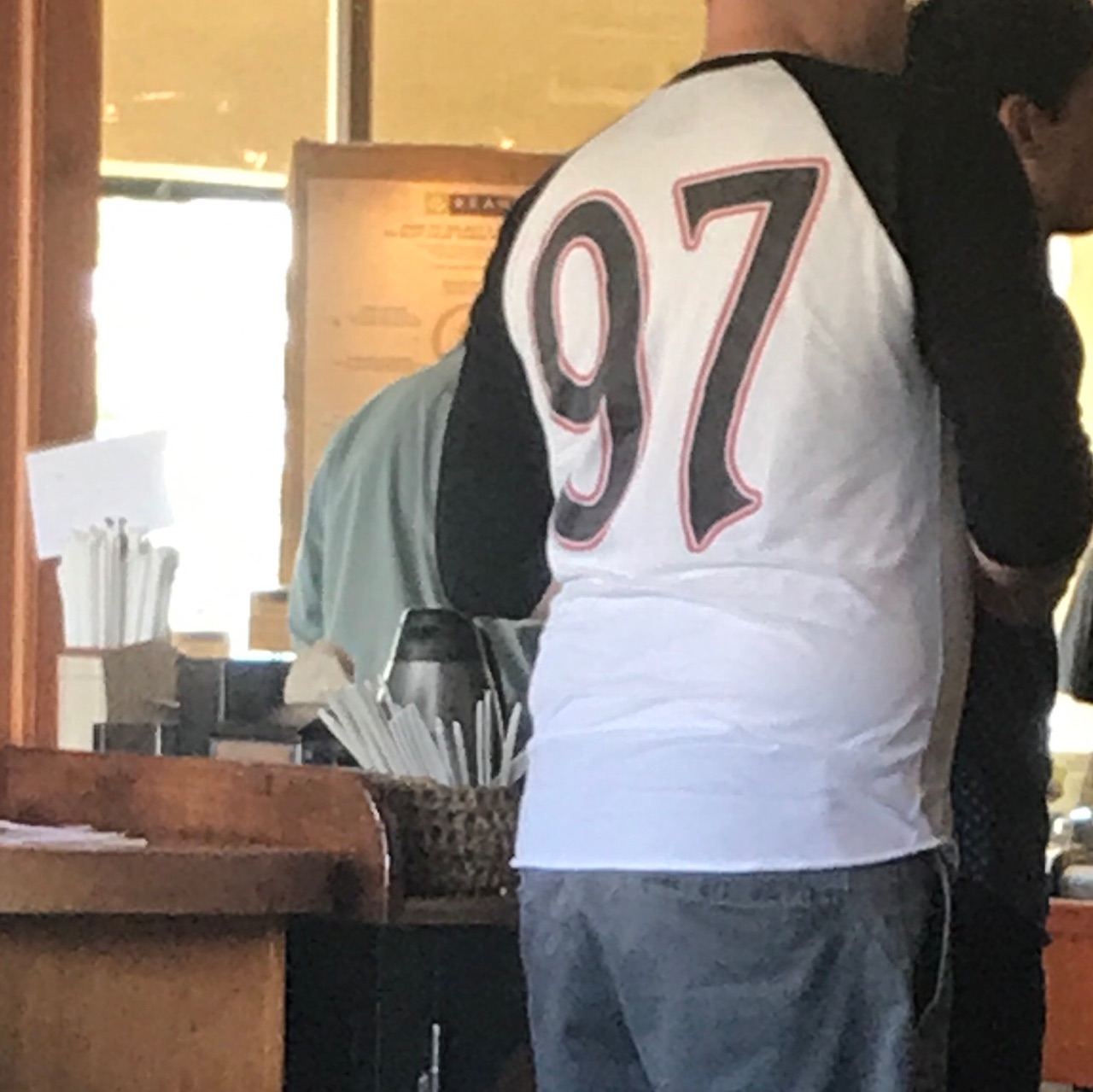 I’m always interested in the messages people have on their shirts. I have two Bruce Springsteen shirts. And a shirt with the Chevrolet emblem and a couple of UCLA shirts but I hardly wear them because they’re old. I thought about getting a U2 shirt at the concert last Sunday, but I don’t want a U2 shirt. For some reason I’d rather wear a Springsteen shirt. I don’t think I’d wear a Beatles shirt even though I love the Beatles. I might, I’m not sure. But I would wear a Dylan shirt I think.

Did this guy just stumble upon it at some clothing store? Did he order it online? Was there a 96 shirt, too? I didn’t see the front of it, so I guess it could be some famous player on a baseball team. Or hockey maybe. But I’m always am interested in the messages people have on their shirts.

What we wear says something about who we are.

I took that first yoga class only after years of driving down Adams Avenue and seeing a sign that said “Hot Yoga.”

If it didn’t have the word hot I would have never gone. I had grown to crave heat. It made my body feel better. Still does.

Within minutes of that first class, I knew I was home. For 90 minutes in 115-degree heat, I experienced something that I could never even try and describe.

I started a lemonade diet the next day.

More important, all that pain went away. I slept like a baby that night. (I don’t know where the expression “slept like a baby” came from because if you’ve ever had babies they don’t always sleep that good.)

More important than the baggier pants and good sleep, I started learning how to breathe.

When we get stressed, our body automatically goes into a kind of panic mode. Doesn’t matter if the discomfort is physical or emotional. Fight or flight is an innate animal reaction. Nothing we can do about that animal response unless we are trained to first be aware of it. Then the hard part — realizing it when it’s happening and as they say during yoga, “breathing through the discomfort.”

So if you stub your toe or when your baby cries, or if you get in a fight with your lover or mom or dad, you panic and start taking short breaths. Or, you hold your breath.

Less oxygen gets into your system so your body stresses out more so you panic and take more short breaths.

It’s taken me 8 years to learn how to breathe. I still forget to sometimes.

Whenever we start yelling at someone you can bet we are in panic mode.

It’s weird how us humans are really just animals. Do you ever think about that? We react just like animals. Automatic response. Stuff like flinching. That’s what dogs and cows do.

To become aware of our animal-like behaviors is to become less like lower animals, and more like gods. I don’t mean Zeus or Athena or Yahweh. I just mean higher than mere beasts.

More important than breathing — well, probably not more important but as important — has been the art of letting go. When we get stressed our muscles contract. We clench our jaws. Stuff like that. But to learn to let go. To actually relax your muscles when things get more stressful.

One of the hardest things in yoga though is the temptation to lose focus. Start thinking too much. It’s really easy to do that in yoga because it’s such a serene atmosphere. The whole thing is to let go of all those automatic thoughts (which are usually worries).

Often when there are men around me who have better postures, I can become competitive. The whole deal is to focus on yourself and the instructors are always encouraging you to not compare yourself but I do it anyway.

Never with women, only with men. I wonder why that is.

And some people can really bug me. One time there was this couple. They were probably in their 50’s. Very granola looking if you know what I mean. They had their damn mats right next to each other. I’m sorry to write damn but it was one of those little things that just gets under your skin. Or, my skin.

Then they did the 26 postures kind of in unison. Kind of like pair figure skating. And a few times they held hands during the postures. I think if Jason (the owner) was there, he would have put a stop to it. But it was some new teacher. I tried so hard to not look at them during the postures but I’m telling you it was almost impossible.

Sometimes there’s a pretty woman there. That can sometimes distract me if I’m really honest.

But compared to when I started 499 classes ago, it’s day and night.

My capacity to focus has so improved.

I still have a long way to go.

That’s why they call it a practice.

Every Friday, I set my timer on my iPhone for 15 or 20 minutes. Then I start writing. I don’t stop. I write whatever pops into my mind. After 15 minutes, I go back and quickly correct all the blatant typos and make a few edits. Then I publish it on Paulosophia.