May 5, 2017 By paulosophia in Politics, Religion Tags: my life, philosophy, politics, religion

Are you doing well?

Lots of people try to act like someone they are not. They fake their personalities. If they are introverted, they often think it’s better to act as a bubbly extrovert. So they fake it.

I don’t think many extroverts think it’s cool to be a drab introvert. I don’t think bubbly outgoing people go to parties and try and escape into a corner and avoid all the potentially trivial conversation.

If Jesus took the Myers-Briggs Personality test, I wonder what he’d be. I think he’d be an INFP.

All I know is that as I look around, more and more, it seems to me that many people today are searching for meaning, and are lonely. They know “this is not it” — all the struggle in work. The school. The running around. The diets. The organization strategies.

There are lots of remedies for life being peddled out there. Make more money. Climb the corporate ladder. Become more physically fit. Find the right lover. Need a new job.

We are always striving to make things better.Advertising exists precisely to make us feel we need something that we most likely don’t.

And advertising is always right there precisely to make us feel we need something that we most likely don’t. 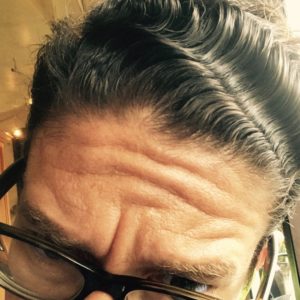 I like all of the wrinkles on my face. The ones between my eyebrows are getting deeper and deeper every year. Probably because I’m always thinking too deeply about some trivial matter. Every year I notice more and more of these crevices, and I think they’re kind of cool.

Then there’s Mike Pence, who’s way older than me. 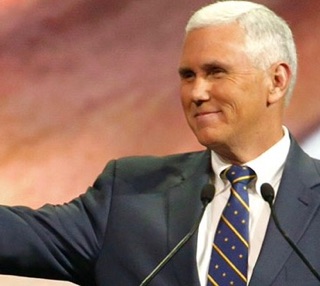 When the Vice President smiles there are all these wrinkles around his eyes and mouth — the kinds of wrinkles you’d expect to see on a sixty-whatever-year-old man. But his forehead always looks the same: no wrinkles, it never moves even when he smiles.

Can they not Botox the side of his eyes so that the whole face all looks consistently waxy?

Sometimes people do weird things to their bodies and they think it makes ’em look better but often it doesn’t.

John McCain don’t use no Botox and maybe that’s one of the many reasons I’ve been a supporter of his for so long.

I don’t think Donald Trump uses Botox. But his teeth look fake to me. Getting fake teeth is more justifiable than using Botox. Because when you get older sometimes your teeth get damaged or ground down or get really yellow or gray.

If ever get my teeth improved, “improved,” I won’t make them look too white, though.

I think women have it unfair in so many ways. Nobody really cares that much how men look, but women have way more pressure on them to look young and skinny and beautiful, or what current fashion trends say is in.

It’s harder being a woman than a man. Always has been. You had to be male in order to vote 100 years ago. How weird is that?

If I was a woman, I might be very tempted to be a feminist.

And this week all those men in power voted to do things that will affect millions of women. Look at ‘em all in their moment of victory.

I’m all for democracy, but something strikes me as odd or wrong when so few men have so much control over so many women, especially when it has to do with what they do with their bodies.

Look at ’em all (and Mike’s forehead). 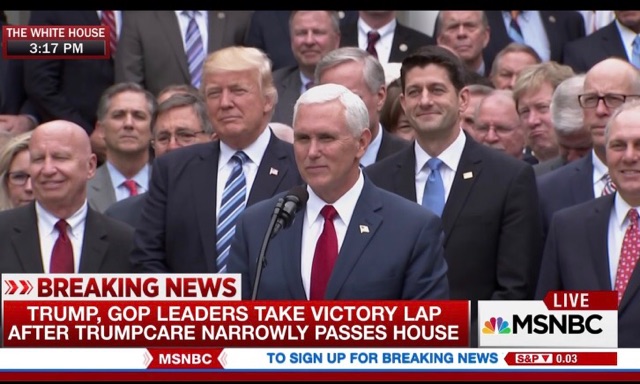 I don’t want a bunch of women telling me what I can do with my body.

I’m part of it. My image matters to me as much as yours does to you, even though I’m the first to admit also that it’s really all facade.

For a few decades, in my late 20’s and 30’s, I wanted to have an academic look so my image was to make it look like I didn’t care much about my image. College professors usually appear pretty sloven, disheveled.

Anyway, I wanted to have the “I don’t really care how I look,” look.

I didn’t discover what skinny jeans were until 2014. Gina took me to J Crew. She gently suggested that I needed new jeans. I hadn’t bought new jeans in over five years. Maybe 8 or 9 years. When I tried the J Crew jeans on, it was hard getting them around my calves. And I don’t have abnormally large calves. I thought they must be defective. I left the dressing room to show Gina and told her there was something wrong. I wasn’t kidding.

She almost fell to the ground in laughter. “Um, they are ‘skinny jeans’ Paul.”

I had no idea whatsoever that the style of jeans had changed. I seriously never noticed lots of the other guys out there were wearing jeans they had to peel off their bodies every night. I also had no idea my flared jeans were a tad out of style.

I bought the skinny jeans and now own a few other pairs and I’ve thrown out all my flared pants. Today I notice when men wear flared pants or dress pants with big pleats.

People sometimes like to laugh at me because I’m not very aware of current popular trends or actors or media stars or whatever. But I can name all the members of the Supreme Court and have been able to for most of my adult life. And I could put in chronological order the greatest thinkers starting with the pre-Socratics all the way to Saul Kripke and for some reason stuff like that matters to me more than the latest pop culture whoever star.

But I did commit when I started this blog to learn more about what’s going on in the pop culture world. I wanted to climb out of the dark ages.

I watched the entire series of The Office and Breaking Bad and have started listening to newer music and I could now tell the difference between Beyoncé and Rihanna — not their music, but how they look. (I had to run spell check to get their names spelled correctly.)

Earlier this week I made a commitment to listen to an album by Beyoncé called Lemonade. Guess there’s a video, too.

But as I write right now, I’m listening to Hurricane by Bob Dylan. It’s about a guy named Reuben “Hurricane” Carter who was a black man falsely accused and imprisoned for a murder he never committed:

“Here comes the story of the hurricane, the man the authorities came to blame. For something that he never done. Put him in a prison cell but one time he could have been The champion of the world.”

“When the cop pulled him over to the side of the road, just like the time before and the time before that. In Patterson that’s just the way things go. If you’re black you might as well not show up on the street ‘less you want to draw the heat.”

Most white people reading these lyrics really don’t care that much about racism and police brutality. Neither do pastors of evangelical churches. It’s just a fact. It confuses me.

Okay. I just went to Apple Music to listen to Lemonade. Apple Music is like Spotify. But the album isn’t there. And Apple Music has like every artist. There are lots of Beyoncé albums on the list. But no Lemonade. Is it not free?

Just went to Itunes and you’ve gotta buy Lemonade. It’s not free. I wonder why. Okay. Bit the bullet. Seventeen bucks. I recognize her voice. The first song is called “Pray You Catch Me.”

Don’t you find that usually, you need to listen to an album three or four times before you start liking it? I wonder why that is. I don’t know.

I always play new albums as loud as I can to get the full effect.

The second song, “Hold Up” is better than the first. Better chorus. She just said. “f**k me up a bitch.”

I wonder a lot about profanity these days. Most people say profane words in their heads. Like on the freeway if someone cuts them off they say, “What an a**hole.”

Some people say “What an a**hole,” out loud, but only if they are in the car alone.

Some people say “What an a**hole” out loud no matter who’s in the car and might even roll down their window and say, “You a**hole,” to the alleged a**hole.

I think all probably use profanity. Some just in their heads. Some, like Beyoncé, have the guts to say it in their songs.

I wonder if Jesus cares about profanity. I really do wonder.

This week two more incidentals in the world of race relations. The cop that shot Alton Sterling six times was acquitted in a Federal Court. His name is Salamoni.

Facts revealed that Sterling, who was black, was, was asked to put his hands on his car. And he complied. Then salami held his gun to Sterling’s head and said “I’m going to kill you, bitch.”

So after they tasered Sterling twice, and he was on the ground, and two cops had him subdued, Salami shot Sterling three times. When Sterling rolled over, Salami shot him three more times in the back.

Just to make sure. Salami made good on his promise.

Sterling had had a gun in his pocket. It is legal to carry and gun in Lousiana.

In the same week some cops shot into the back of a car. Long story but same result. A boy named Jordan Edwards. 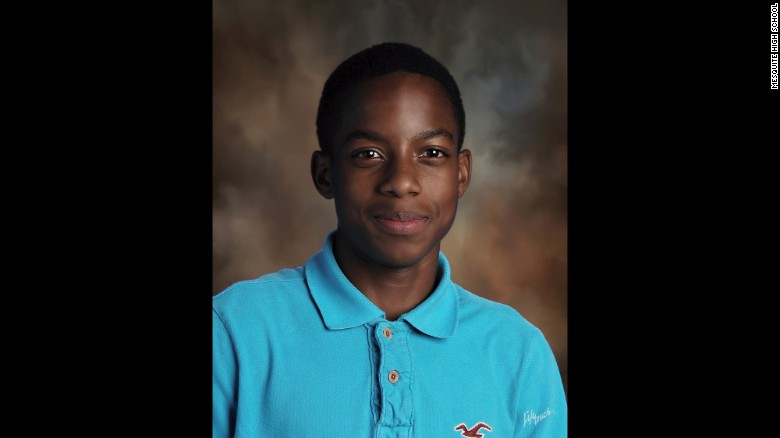 A freshman in high school.

Football coach referred to him as, “…a coach’s dream. He was exactly the type of kid that you want in a program.”

Guess, there was a high school party. Cops came because they heard there was drinking. Edwards got in car with his older brother and friends to leave the party.

They were driving away.

Not enough people care about the things that really matter. Myself included.

Every Friday, I set my timer on my iPhone for 15 or 20 minutes. Then I start writing. I don’t stop. I write whatever pops into my mind. Some people call it stream of consciousness. After 15 minutes, I go back and quickly correct all the blatant typos and make a few edits. Then I publish it on Paulosophia.

I started freewriting in the early 1990’s because I had read this short article called “Freewriting.” I was a horrible writer back then, with the most severe writers’ block. The article said you have to write WITHOUT STOPPING. For a fixed period of time. Even if you have to write the same word over and over again. Over time, you get better, and more confident.

I can’t count how many freewriting exercises I’ve done over the years. Thousands for sure. I still do them almost daily.

If you haven’t, you should try it!