I’m a believer in church. I was a pastor for many years. Pastors work hard. So do church staff and leaders. However flawed some might be in their approaches, I believe virtually all of them want to make the world a better place.

But I’m in a bit of a church rut. I skip church almost weekly. Have for over a year now.

I am not prescribing others follow — I believe many need church. They need to hear hope and they need to find people who will love and support them.

But I’m not in that place. I’m disillusioned over the support of Donald Trump by the overwhelming majority of evangelical Christians. I’ll get over it.

But I did other things today. I think they might also be of spiritual significance.

I made the world a bit of a better place. Before I talk about my daughter and mother, let me talk about grass.

In the winter the grass gets thin. Too much shade. So it’s kind of half dirt and half grass. But spring will bring more sun. Sun will bring possibilities for the perfect lawn. 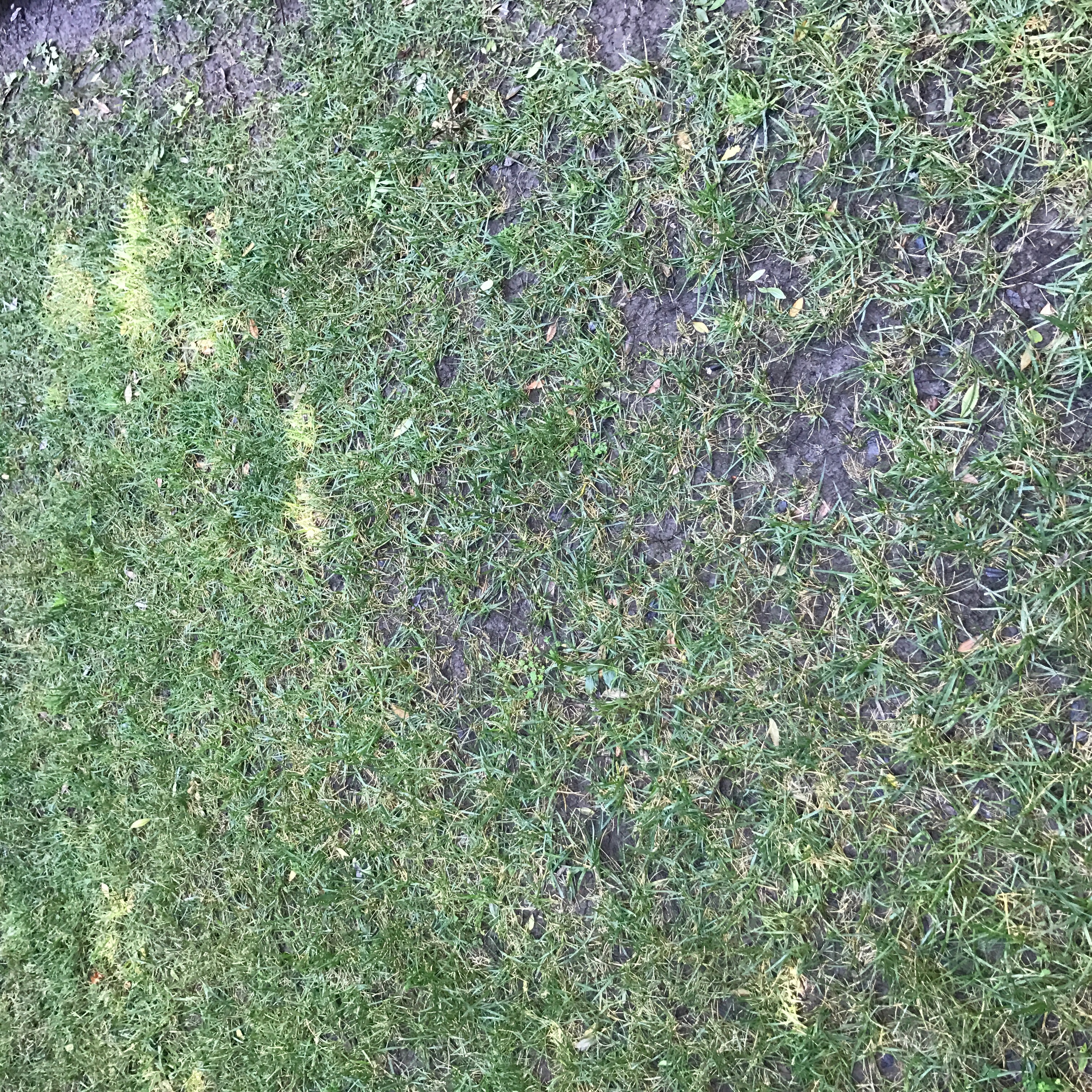 So yesterday I went and bought three forty pound bags of gypsum. One hundred twenty pounds of white powder that looks almost just like flour. I doused the entire yard with it. My skin turned a few shades lighter in the dusty process. But I knew the gypsum loosens up the clay, and allows water and nutrients and oxygen to promote root growth.

Then today I used the stuff called Grow Power Plus. I guess it contains humus. Not the stuff with garbanzo beans. But some kind of mineral or nutrient. I know gypsum and Grow Power Plus work because I’ve used them before. 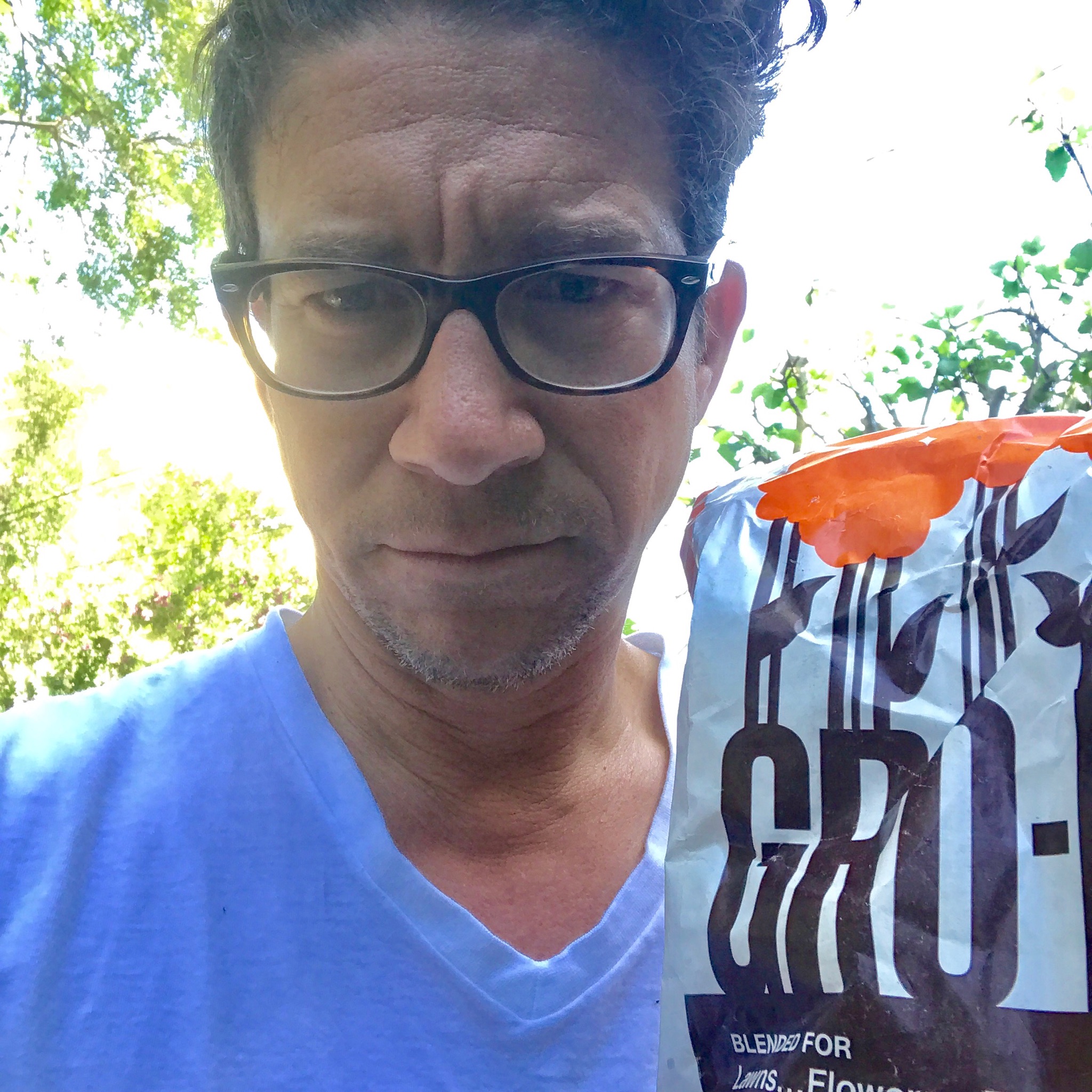 Then after an hour of trying to perfect my lawn, I started thinking. I think a lot when I garden.

Why should this this effort even matter? The lawn looks fine. Why do things always need to be better than they already are?  Certainly there are more important life-changing actions than this backyard lawn. Soup kitchens. Widows wasting away in hospitals. Some church needs a bass player. And here I am trying to make my nice lawn nicer — and nobody’s life will improve as a result.

When Bree turned five, her mom and I bought her a Schwinn bicycle — her first bike. I always had this vision of keeping my kids’ first bikes. Then when they are adults, they can hang them on a wall or give them to their own children. You know, promote memories. I always knew someday they might think they are junk. And they might give them to charity. But at least they would have that choice.

Bree’s bike has been hanging around the backyard for 8 months. I started noticing some rust. So, better than investing in the promotion of a plush lawn, for which no human life will be substantially improved, I switched to something bettter — contributing to humanity.

First, I got rid of the rust with some steel wool and WD40. Then I washed it. Then I would put it in the attic.

All this as a way of honoring Bree, who is away in college, and who I miss almost desperately.

Maybe she’d show the bike to her own daughter one day. 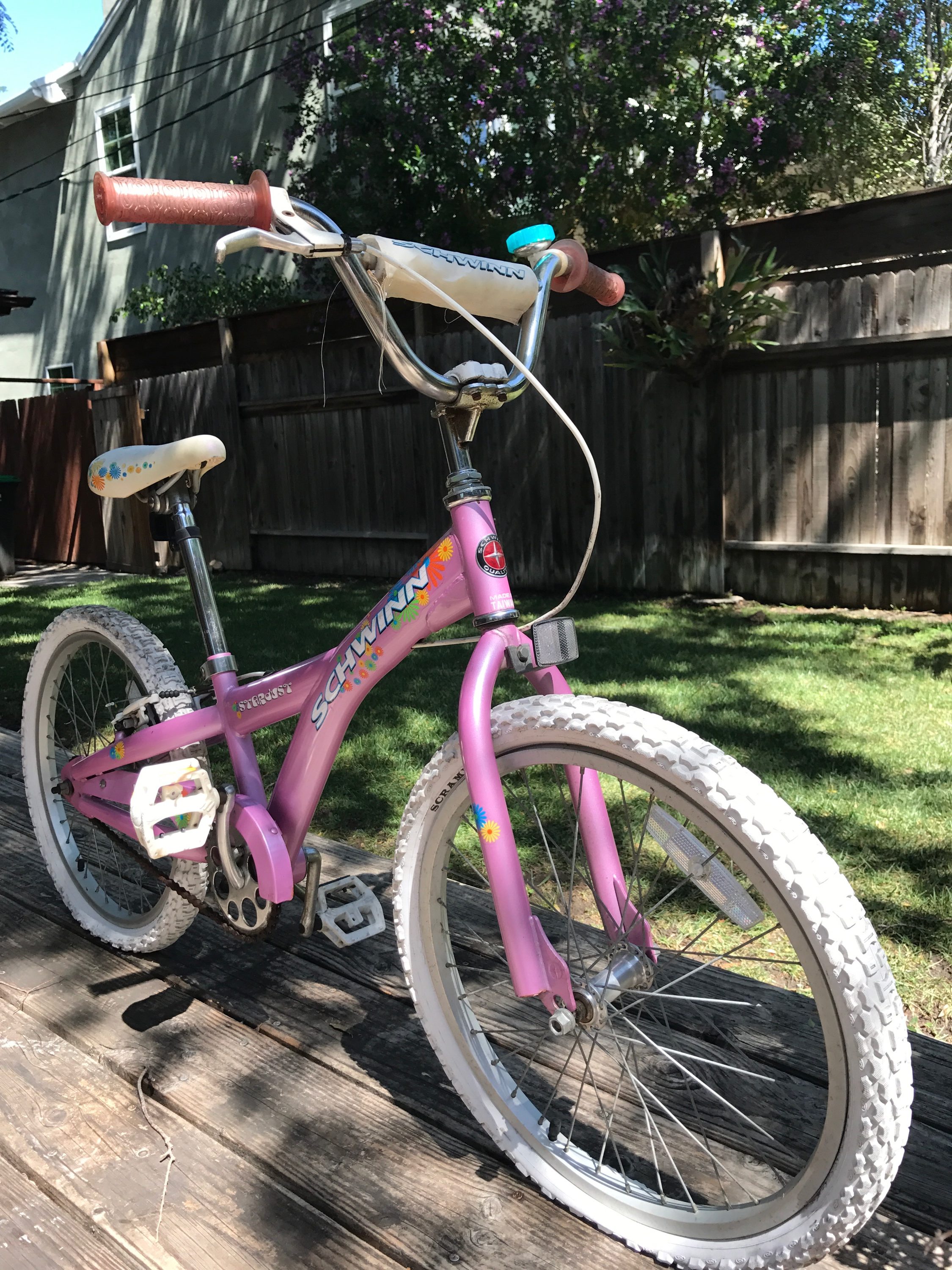 While I was scrubbing the frame and the seat and the handlebars and the little blue bell, I remembered the day we gave it to her. It’s all on video somewhere. I wish I could show it here. Because her brother, Edison, was two at the time. And when Erica and I presented her with her People Power Stardust Pink Schwinn, Edison wouldn’t have it.

He broke into the saddest cry. Not a bratty spoiled cry. One of those cries when you know there is real pain involved. The kind that comes from deep inside one’s heart.

“I wanted a bike. Why did she get a bike I wanted a pink bike too.”

Mom and I did everything we could to describe to young Edison concept of it being Bree’s birthday. How each person has his own birthday, once every year, and how his birthday was less than a month away.

But it didn’t matter. He was inconsolable. I don’t remember what we did to eventually distract him but as I was scrubbing away, that golden memory wouldn’t leave my mind, and I know it never will.

Nor will the memory of running alongside her down Miramar Lane in Balboa on the cement streets a few minutes later and how, now, those are some of the fondest spiritual and meaningful moments of my life.

I wasn’t at church. But I did pray.

God, thank you for the gift of my three children. The hundreds and hundreds of beautiful memories. That they are all well, wrestling with their own spiritual lives, for every breath you give them. Even today.

When we sold Mom’s house after her stroke, me and my sisters divided up some of her things. I ended up with this plant. 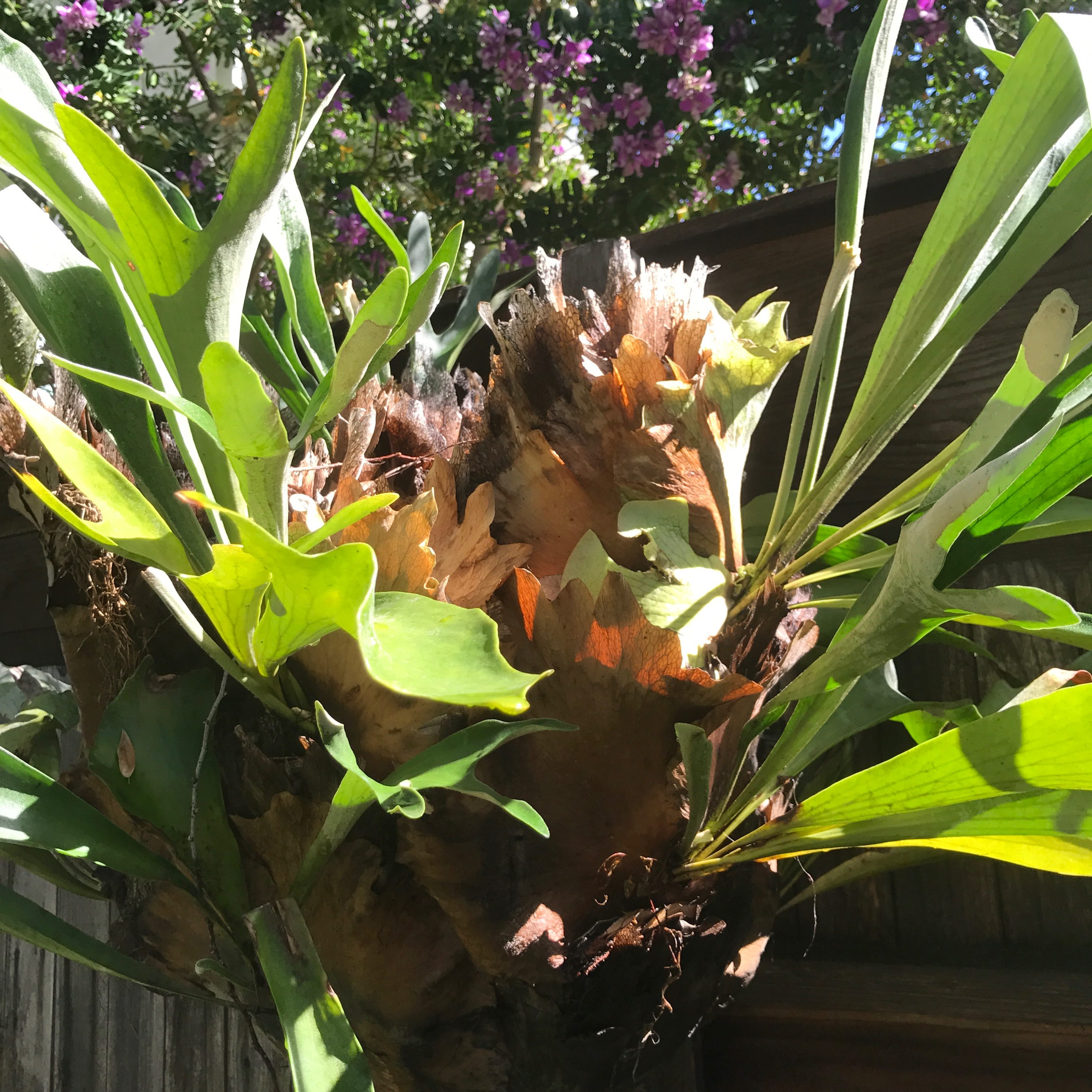 I don’t know the name of it. I think these hanging bushes might be referred to “antler plants” but I’m not sure. I think they are pretty trendy right now.

Like the bike, it’s been sitting in the back yard for 8 months. On the ground. I was going to throw it away.

Then I realized the feeling I got as I cleaned Bree’s bike. And some more thoughts.

I just gave meaning to this bike. It could easily be given to charity. I could have left it dirty and rusty and thrown it in the garage. I’m not sure Bree would mind too much either way. As I scrubbed the light rust, and wiped the grease away from the spokes and chain, and made the tires white again as they once were, I’m working on something, bettering it, and because of this work, I’m giving it value.

To care for something means to give to it. And to the degree we give to that thing, we have the supernatural power to add to its value. Not monetary value, its inherent worth.

So I applied the same care to Mom’s antler plan. Hung it up. Pruned away some dead leaves. Added a bit of the humus fertilizer. Watered it.

Like the winter lawn and Bree’s pink Schwinn, I gave the plant value.

I love it now.

I thought of how I want to give Muslims value.

Then I thought of how Mom, before her stroke, would have done the same — for plants, for animals, and especially for people.

I thought of my anger in September of 2015 when she was comatose in hospital.

I remembered this raw post I wrote about the limitations of faith.

And all my work today made me think of seeing mom yesterday. How far she’s come. And how she was talking about all the plants in the patio at her nursing facility.

And this picture I took. 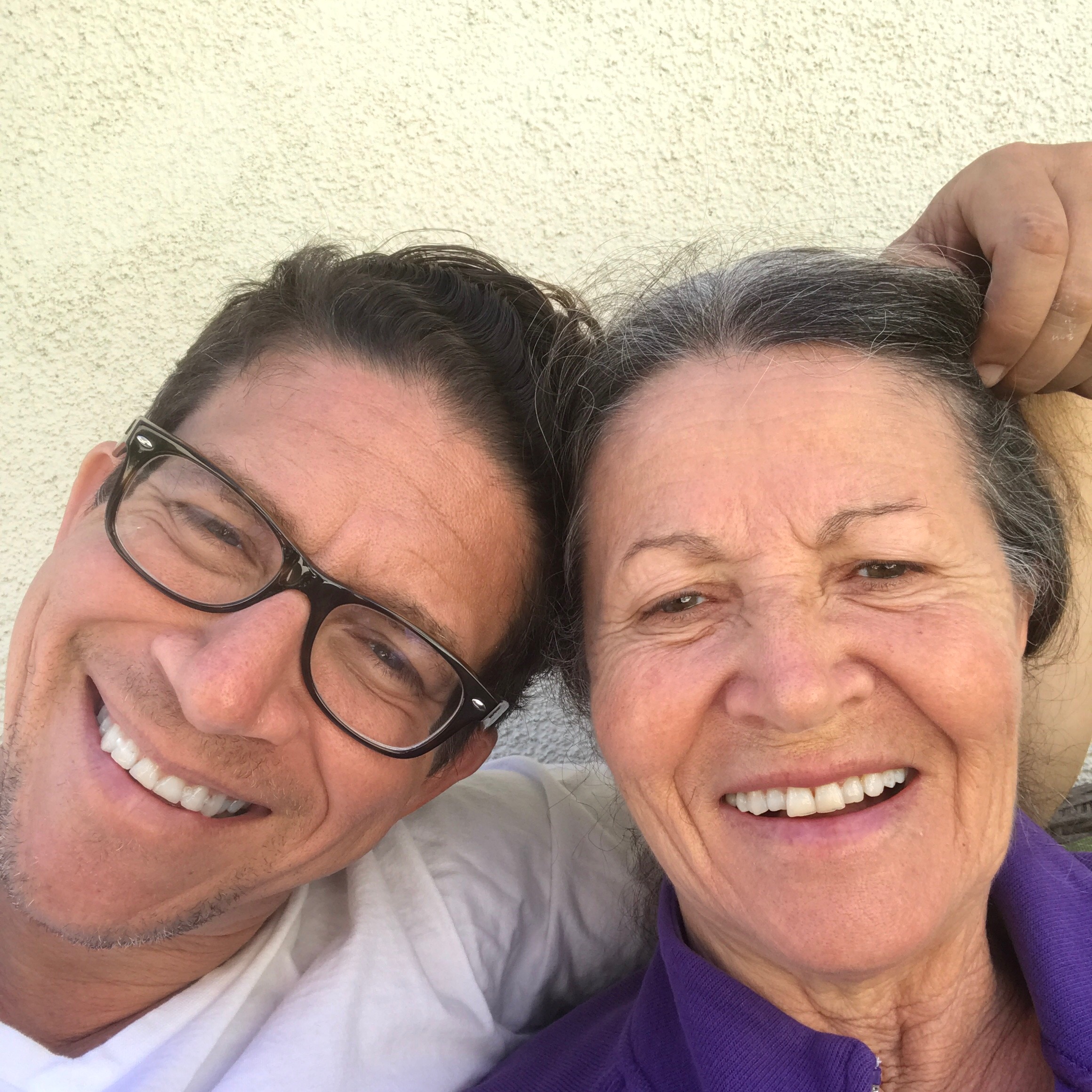 I fixed one of the antler leaves that was broken. I propped it up using a few twigs.

Shed a tear or two — both sadness and joy.

Then realized skipping church can’t always be such a bad thing.