I’m leaving For The Desert To Pray For Syria

To my Christian Brothers and Sisters:

I’m going to the desert. I’m leaving now. Not sure where I’ll stay. Not sure how long I’ll be gone. But I must get away. I’ll bring a tent and water and that’s it.

I’ll pray for you.

Becuase over 75% of you who claim to be Jesus followers supported a ban against Muslims that included keeping Syrian refugees out of our country. You’ve bought the baseless idea that Muslims are dangerous. You discriminate against them based on their religion. And you were and you are unwilling to stand up to President Trump for his inhumane bigotry both before the election, and now.

Many of these refugees you want to ban are, and were, young children. Like these two twins held by their father, Abdul-Hamid Alyousef. 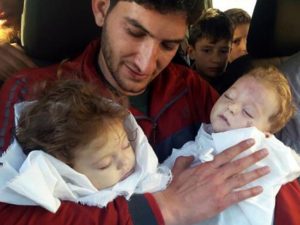 These two were just killed in the latest chemical attack by the leader of Syria, Bashar al-Assad.

There were heaps of children. Piles of people. Dead. 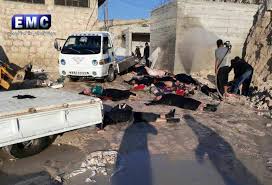 Thousands of refugees have been vetted by our intelligence agencies. They wait daily for hope of a better future. For just basic safety.

But, no, they are “dangerous.”

These dead and the refugees are not terrorists. Not ISIS members. They are people just like you and me: moms and dads and brothers and sisters. People who just want a better life.

And because they happen to be Muslim, you don’t want to let them in.

Your failure to speak up against the discrimination against these refugees, and Muslims, breaks my heart to its core. Many of your leaders have been impotent out of fear of being “political.”

But WE CHRISTIANS are to be the radicals, the zealots, the ones fighting for the rights of the powerless. Like our Lord did.

Instead, we keep quiet. Save for retirement. Sing those cozy songs on Sunday. Blame the Democrats.

God help us all. But help them more.

« PenPaul: My New Pens and Appearance Vs. Reality» Photos, Prayers, Parenting (And Getting Naked).