People are mad at Mike Pence for his not-eating-alone-with-a-woman rule. Some people call it, the “Bill Graham Rule.” Billy Graham, given his prominent international stature as an evangelist, made sure he was never alone with a woman. He wanted to avoid sexual scandal. And he did.
People on the left and on the right are all chiming in because Mike Pence has adopted Graham’s rule. I’m not exactly sure what I think about it all. But I do have my thoughts. Kristen Howerton and I will be talking about it all today at 3:00 p.m. on Facebook Live on her page.
Here are my initial raw thoughts, unfiltered, not thought through thoroughly, and probably not exactly germane to the exact conversation in the media.
Bottom line in my view is that men are to blame for centuries of sins against women, women have been objectified by men for too long, and silly external measures are no way to prevent sexual misconduct. 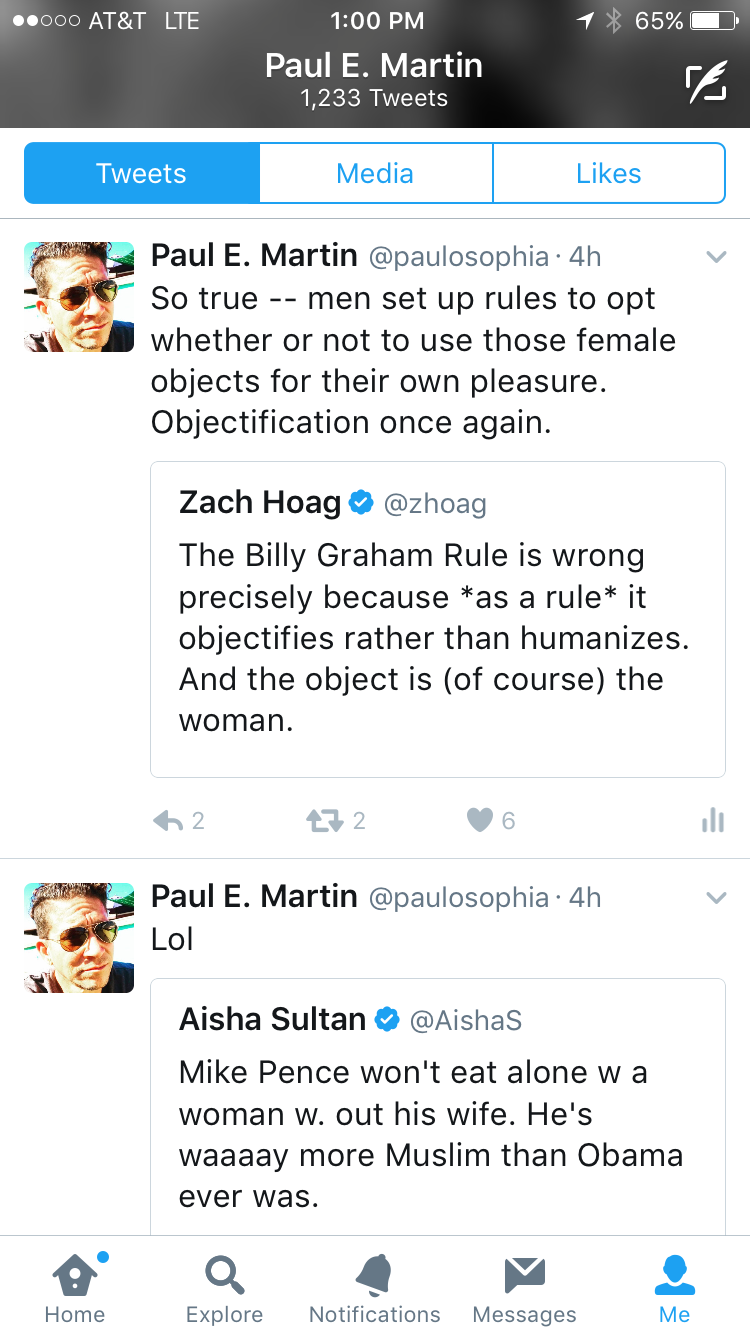 To start with, men treat women like objects. Sex objects. Objects to observe. Sex is an industry and men are the biggest customers. Nobody really likes to talk about that brute fact. Men, especially, don’t like to talk about that brute fact.
Some men even blame their sexual tension, often, by the way women dress. Translation: rape is the woman’s fault.
(And for anyone who thinks Donald Trump’s comments in that bus were “locker room banter,” respectfully, you are a sicko. I’ve been in plenty of locker rooms. I’ve heard only a few similar comments like that, just a few, only from the most base and misogynistic creeps you could picture.)
Over and over and over I think of the Women’s Warch. I wrote about some of it here. Lots of men were angry that many of the women were angry. But why wouldn’t the women, the vast majority of them, NOT be angry? I’m not going to google the stats here, but you know them. Something like one in four girls was molested by some creep uncle. Stats on date rape and regular rape are about the same. And as if that wasn’t enough, sexual harassment and discrimination against women in the workplace are so rampant you’d be deaf and blind if you’ve never seen it first hand.
Women are afraid to walk to their cars at night because of sicko predatory men.
I’ve never been afraid to walk to my car at night because of sicko predatory women.
The point here, again, is that women are objectified and consequently victims of abuse by men.
If you are a real man, you will just admit this brute fact.
In order to try and curb the adultery problem, and given we live in a culture of quick fixes, well-intentioned male pastors adopted the Billy Graham Rule to protect themselves from all the flocks of women pining to get in the sheets with them. So you can’t drive in a car alone with a woman under any circumstance. Can’t have a coffee together. Because, of course, we must protect ourselves from each other.
I can’t go into my reasoning here, but I think these rules implicitly blame the women, yet again.
Billy Graham was a man of character. And because of that, and because he didn’t want to be scandalized, he took some big measures to ensure his reputation wasn’t tarnished.
I think it’s fair what he did.
But I think it’s silly season when other Christian leaders and churches tried to impose similar measures to prevent sexual scandal.
Ultimately, most Christian leaders are men. So the implication is the women would be willing. Blame the woman, again.
Because if Billy Graham or Rick Warren or The Pope of Rome want to have sex with a woman or a man, a coffee at Starbucks won’t be the impetus behind the sex act.
If these male leaders want to protect themselves from the temptation of sexual misconduct, I assume they also shouldn’t be sending text messages to women. Or Facebook message.
To guarantee sexual fidelity, perhaps churches and government buildings should have separate buildings. Two state capitals. Two church buildings. Two White Houses. Maybe someone should create an app so you only get texts from people of the same sex, except your wife and sisters and aunts.
None of the just and water techniques will work.
External measures implemented by evangelical churches haven’t exactly resulted in high marks with respect to issues of immorality, abuse of power, etc.
Because morality and ethics are issues of the heart. And as the scriptures tell us, the heart is full of mixed motives. On some days or during some hours, motives of virtue and goodness thrive; but on other days and during other hours, motives of selfishness and greed rule.
Finally, if sexual morality is to be cemented by no power lunch or golf or dinners or “being alone” with a woman — and men, ahem, overwhelmingly hold positions of power in corporate America, politics, religion — what a great way to keep the woman, once again down: “Don’t meet alone with her because you might somehow stumble.”
Good old boys club.
It puts women outside of normal business norms.
I am not advocating married people meet for late night drinks in private nightclubs with members of the opposite sex to conduct business. Mutually agreed upon conventions are part of what monogamous relationships require.
But I have a hunch that Mike Pence and his adoption of the Billy Graham Rule is more of the same — as my friend Zach Hoag says, “it objectifies rather than humanizes.”
Mr. Pence can dine with whomever he chooses. But these little “protective” measures all seem rather synthetic to me.
____________________________________________________________