My New Pills, “Don’t Be A Pussy” Advice, Oscar Christianity

Ended up in the office of my psychiatrist on Tuesday. Hadn’t seen her in years. I had been feeling down. Anxious.

Growing up, weakness was frowned upon. Any kind of weakness. Often if you had a cold, you went to school. Or if it’s Saturday, and you had the flu, get on that tractor and shiver and till that field. If you have to vomit, get it over with and finish the job.

Weakness and laziness and illness were for “pussies.”

Counselors were quacks. And you don’t need quacks to whine and complain to. All that psychobabble is a bunch of “bullshit.”

“Well, ahem, I feel okay. Er, just kind of feeling down a bit here and there.”

“Well, I can find my mind racing from time to time. It’s exhausting sometimes. And I worry about my kids a lot. I think really deeply about social issues and what’s happening to the millions of peaceful Muslims and to our nation. I can’t turn the thoughts off sometimes. So I’m having trouble focusing.”

Two hours later I’m walking out of CVS with two bottles: Prozac and Ativan. She wants me to try them for a few months. 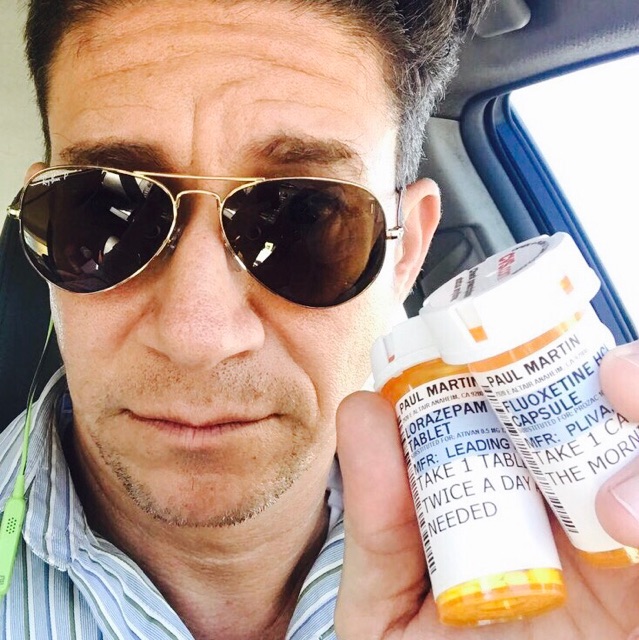 I feel weak for telling you about it.

But I committed in this blog to sharing openly.

I know Jesus won’t mind. I’m grateful for the remarkable scientists who discovered how to move little particles around our brains to help in times like this.

My hunch is that many (mostly women) read this with compassion and no sense of judgment.

But I have another hunch that some judge me. And they’re probably men.

Because many of us men are more likely to have been nurtured in lessons of “don’t cry, don’t be a pussy, don’t be weak, don’t be a ‘girl.'”

One Harvard psychologist refers to The Boy Code — the indoctrination by males toward other males based in the worldview that vulnerability and crying and honesty is weakness. And weakness is the ultimate taboo.

Religious leaders talk about helping the poor. They stress the biblical mandate to advocate for the welcoming of outsiders. Speaking up for them. Raising awareness. Dignity for the most vulnerable and the most marginalized.

Because that’s what Jesus did.

Every Christian since has agreed that we called to welcome and care for the same kinds of people Jesus advocated and cared for. The outsiders: the sick, prisoners, foreigners, traitors, drunkards, disabled and diseased.

It seems that many pastors don’t spend much time making a big deal about the most vulnerable. Yes, an announcement here and there, or some one-week trip to a faraway land. And there’s always some little community project going on to give stuff to kids in need.

But if you added the time, energy and money used on caring for outsiders, it would be minuscule then compared to all the other stuff churches do.

I’m not trying to be critical of the amazing work done by countless churches. It just makes me wonder sometimes if things might be out of balance.

As I write now, an older lady wearing black sits directly in front of me. It’s 7:32 in the morning. 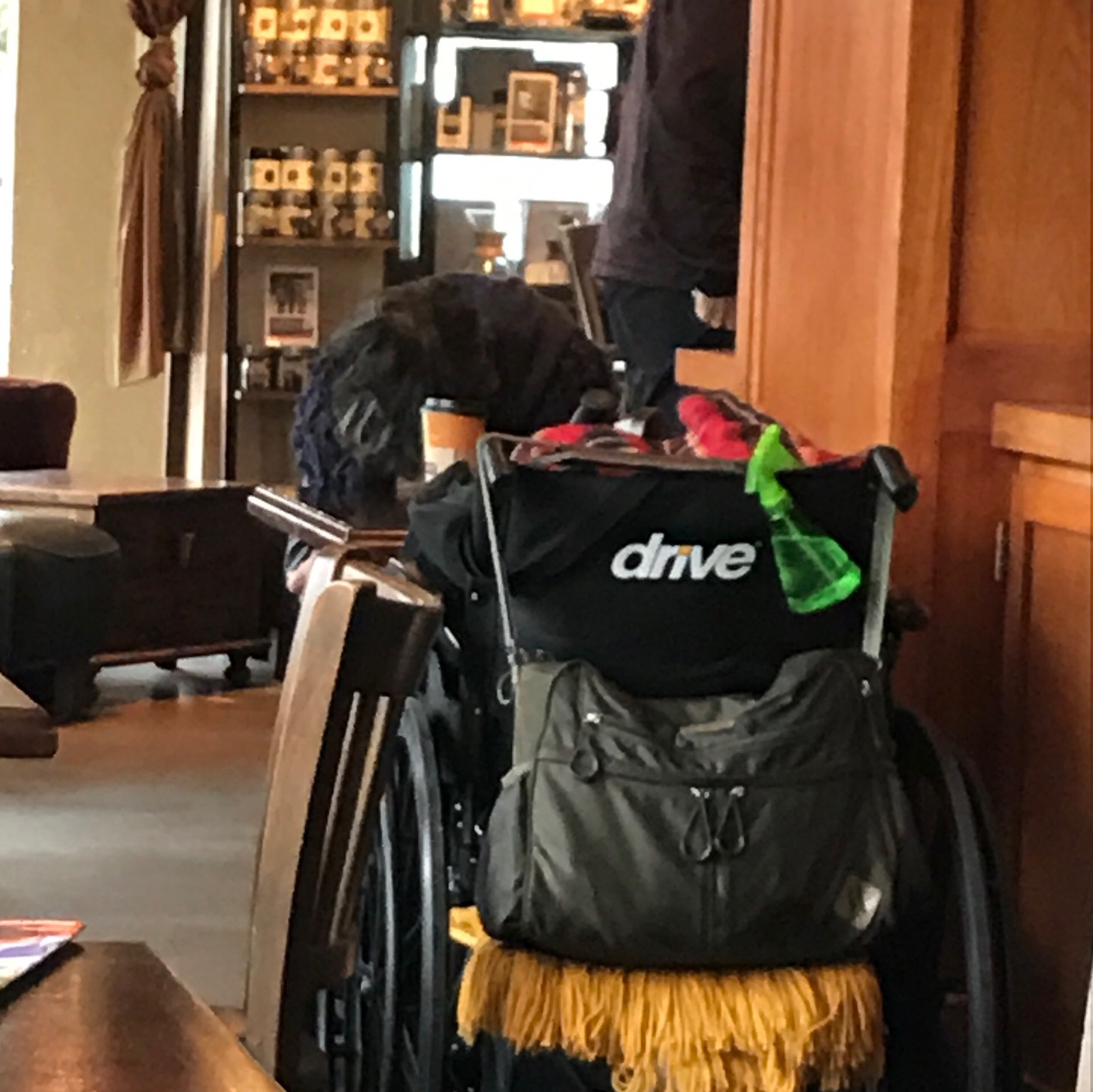 I feel uneasy when I look at her. Can’t describe my uneasiness. Guilt? Helplessness? Just the irony of the human condition — that it’s not so nice and pretty.

There’s clear contrast between her and us.

She’s asleep. We are awake.

Her head hangs in front of her. Her chin pressed against her chest. Her neck shaped like the letter C. I wonder how her neck could stretch that way. Probably lots of practice. Our heads sit securely above our necks.

I continue to study her through the corner of my eye.

These are some thoughts that automatically present themselves.

That can’t be good for the neck.

Why is she here? Was she too cold outside?

Is she somebody’s mother?

I notice a big ring on her wedding ring finger.

Then some hopeful narratives occur in my mind.

Maybe she’s not even homeless. Maybe she lives at a local nursing facility. She wheels herself here to get away from that horrible cafeteria food and the gallons of MJB or Folgers or Yuban coffee that they make in those big urns.

Maybe she doesn’t want to use that cheap powdery “cream” for her coffee.

Some people can make us feel uneasy.

People who are different from us can make us feel uneasy.

Other: A popular word used today that refers to a certain population of people — the ones those in the majority look down on, consciously, or subconsciously.

A hate crime is an act of violence against an other simply because they are an other.

The Homeless, like this lady, or the ones who beg for money on the freeway off ramp, or at the gas station.

Muslims, like the countless ones experiencing hate crimes today. Over 17% of hate crimes are against people for their religion (FBI, 2013).

Refugees, especially if they happen to come from Muslim countries. Hate crimes (49%) are based on race and, as above, 17% based on religion.

They want to be loved just like you and me.

African Americans. Not too long ago they couldn’t vote and many thought they were 2/3 human. Some think, “You’re just gotta suck it up and move on with your life.”

Gays or lesbians or transgenders. When I was younger people would call them fags or queers or dikes. Over 20% of hate crimes are because of one’s sexual orientation.

Others are singled out and thought of negative terms — and many times physically assaulted or murdered — simply because of the way they LOOK, for the way they ARE.

I’ve never been an other.

I’ve never been discriminated against.

Because I’m in the majority.

Because I’m a man, not a woman. Men don’t suffer for being male. Women have suffered usually at the hands of men, who raped them, and physically abused them, and made laws prohibiting them from voting in elections.

I’m not Muslim. Most white evangelical Christians (76% according to a recent poll by Pew Research) want them banned from entering our country.

I’m educated, not uneducated. You never are looked down upon for having a UCLA degree.

I’ll never be a victim of a hate crime.

I once worked at a homeless shelter. We called our guests “clients.” Because we were there to serve them.

Many clients experienced setbacks that made it impossible escape living on the streets. Or in their cars. Or in bushes.

Like the married lady with a 7-year-old child. Who was 8 months pregnant. Who was working a full-time job. Who showed up one day after work to an empty apartment. Whose husband texted her and said he didn’t want to be married anymore.

He had drained the bank account. He moved to the east coast and changed his number.

Within a month, she was living on the streets with her two children.

Then she came to us for food.

Some would blame her.

In doing so, shame her.

A woman. A Hispanic. Uneducated. Poor.

“Well, she made choices.”

“She didn’t have to get pregnant.”

“She should have saved more money.”

Dylan: You who philosophize disgrace, and criticize fear, take the rag away from your face, now’s not the time for your tears.

On Sunday I watched the Oscars.

I listened to stars on stage — some call them liberal, progressive, immoral, Democrat.

I asked myself why many of my fellow Evangelical Christian Republicans today fail to exude anything like this kind of unified voice.

If you are a Christian and a Republican, do not take this as a critique.

Many of you give and serve and care for the poor and marginalized outsiders.

I see your good deeds.

But you won’t use your voices to speak out against racism or hate crimes or defending the poorest refugees that need our care.

We wonder why many see the church as irrelevant.

We have a publicity problem, Republican Christians.

We are seen as merciless, paranoid, mean, heartless.

But most of us aren’t. We must do better!