I haven’t had much to write since the Muslim Ban. Or, if you prefer, the travel ban. I’m not going to write about political stuff here, even though I don’t view issues of ethics and civil rights and human rights “political.”

The other day I was sitting on the couch in the living room. Do you call it a couch or a sofa? Sofa sounds weird to me because growing up we called it a couch. And we said Coke and not soda. We never called Coke or 7-Up or Dr. Pepper or even Shasta, pop.

When I was a kid I wondered often why people called it sofa and soda and especially why they called it pop.

I always thought the way we said it was better.

I don’t think I knew anyone who called pants, trousers.

I think I knew a few people that pronounced the word wash, waRsh.

The one that gets me today is when people pronounce the word important, imporDant.

Back to the couch…

I was sitting on it the other day. I was on Twitter. I was getting worked up again over the Muslim ban, but I won’t talk about that here.

I decided to start a fire in the fireplace. I needed to relax, without electronics. I stood up. I walked to the bedroom. I placed my iPhone on my nightstand. I walked back into the living room. Turned off the TV. And I sat. Fidgeted a bit. Reached for my iPhone a bit to check Twitter.

But iPhone was in my room. Do you ever reach for your phone as a pure instinctual reaction to boredom?

I say this to myself: “Paul, your mind has been hooked up to your iPhone for weeks. And the news. And Facebook. And your posts. You have been in autopilot.” Most people get the idea of what autopilot means, but I’m pressy sure that most people don’t work at finding ways to become more mindful.

I turn my attention to the fire. And I wonder why fires are attractive – why all we stare at them. Why they attract our eyes.

I could feel the warmth of the flames.

I thought about the women and children and elderly now stuck in the Syrian desert because people think they are ISIS murderers.

As much as I tried to let go — just let the images of the refugees go — I couldn’t. I couldn’t block out some of the faces I had seen.

Deep breath. And on the coffee table I noticed a necklace. And I started staring at that. One of the things they teach you in meditation is to fixate your eyes on one object. To take it in. Observe. Don’t look anywhere else. Then when you start getting frustrated and bored, you start paying attention to those feelings of frustration. And you let them go. 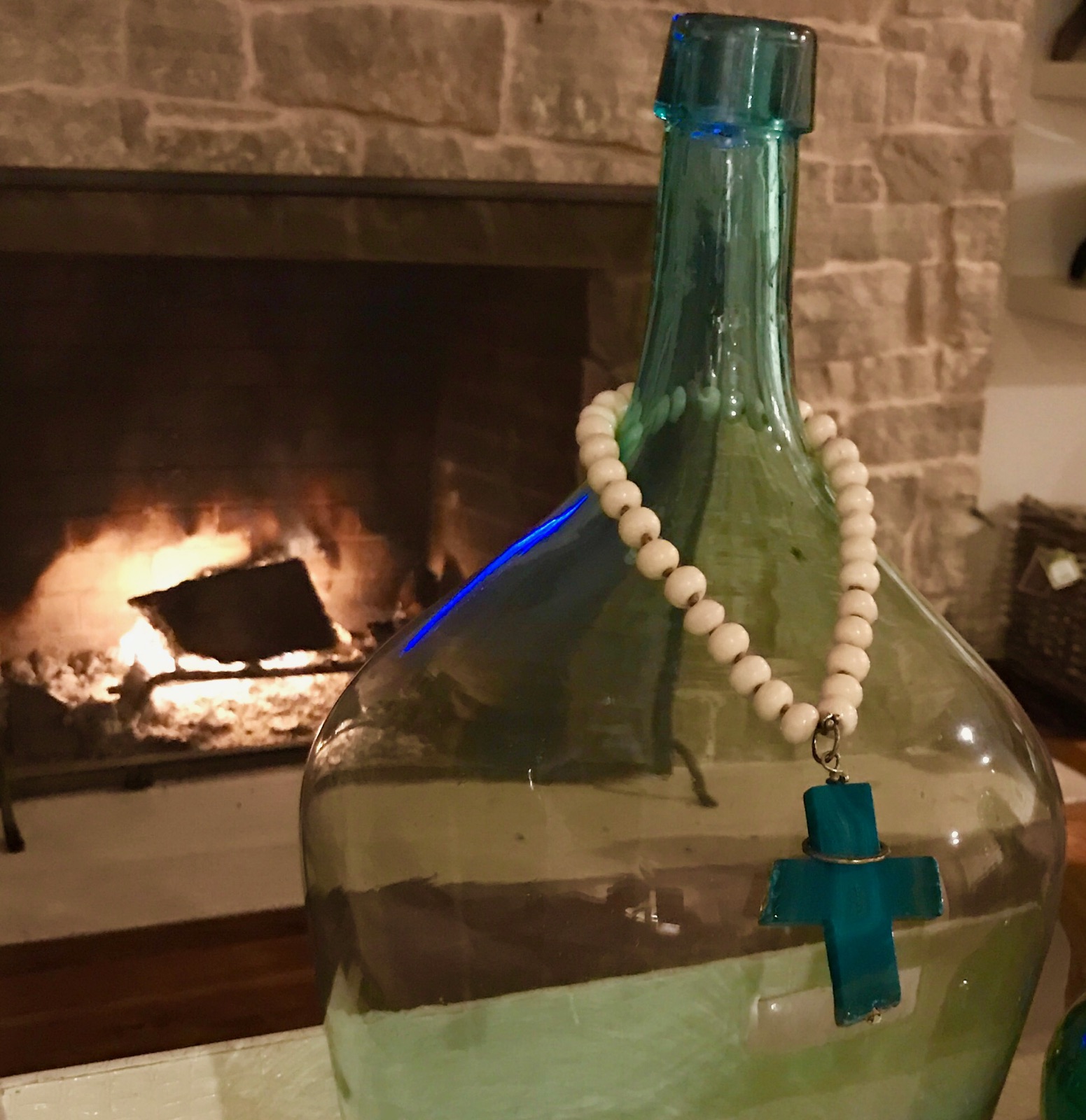 I might have also stared at the fire, since it was in the background. But most of the time my eyes were focused on the necklace. I noticed that the left part of the cross was chipped off. And I wondered if that was done intentionally.

Then it dawned on my that I had never noticed this necklace before.

I wondered how long it had been there.

I pick it up. I count the beads. Thirty-two total. Sixteen on each side.

I thought of when Mom and Dad went to Italy for 45 days. I was 11. Our Aunt Nina stayed with us.

Aunt Nina, like most of my family, was a devout Roman Catholic. She made us pray The Rosary for Mom’s and Dad’s safety. It was horrible. It took forever. I think we had to pray it every night, but I don’t remember.

I later asked Gina about the necklace. She said it’s been hanging on that bottle for over 4 years.

Philosophers like to write about the issue of consciousness — how you could see something but not notice it. I’ve sat on that couch/sofa for over 4 years. I’ve certainly seen the necklace.

But I never noticed it.

I was never conscious of it.

See the philosophical problem? If you’ve seen something, that image is in your brain. You, technically, are conscious of it.

Another way of putting the question is by asking, “How could you experience something without being conscious of it?”

I wouldn’t even have known it was gone.

We all live in a world of autopilot. Our minds churning away about our lover or our kids or our finances and we’re often unaware of what’s right in front of our eyes.

Do you deal with living in autopilot?

People with a personality type similar to mine (INTP) know autopilot very well.

Yoga and meditation help me a lot because they teach awareness of the things that are before you, in the moment. In staying present with what’s in front of you, you learn to identify those automatic thoughts. Then to let go of them.

Many of our automatic thoughts are negative —  centered in regret (things in the past) and worry (of things in the future).

Some people like to say both the past and the future are not real; one is gone, one is not yet here.

I believe that the past and the present live in each of our minds, daily, hourly.

They are each real.

Even though I’ve been a practitioner of yoga for over 7 years, I still go into autopilot and overlook all kinds of things.

Someone messaged me a few days ago. Thanked me for doing what I do as a blogger. Then said “We need more progressives like you.”

It didn’t bother me. Progressives seem far more empathetic than conservatives. I sometimes think that political philosophy is just like parenting philosophy.

Some parents are “tough love parents.” They parent their kids in a black and white way. No whining. No excuses. Suck it up. Consequences. Schedules. Rigid rules. These parents adhere to a belief that people have complete free will.

So the way to raise children – children that will become responsible adults – is to be tough. Make sure they do the right thing.

Sadly, lots of the kids of these parents end up rebelling or without their own autonomy because they fail to develop their own spirits. They are hounded and scared and measured up one side and down the other year after year.

So they end up being more understanding of their children’s shortcomings, and those of others.

DANG! I wasn’t supposed to be writing about politics right now!

So I am going to go for a drive to pick up Elliot and along the way I will notice the trees I’ve never seen, I mean never noticed, before.

« You Will Not Sway Me.» “Kiss Your Pimp,” Yes I’m Judging, Facebook Block, Eleanor Rigby