“Get her Paul E. Martin. Cheri, kiss your pimp with that mouth.”

Last night those vulgar words were in my Facebook thread. The troll was trying to make one of those very American arguments about how Islam is violent and how Muslims — 1.6 billion of them — ultimately, are out to get us.

Most of the people I run into who are critical of Islam don’t even know a Muslim. Most of them have no formal academic training in religion. What they get are from propaganda websites. Of course, given that, they know exactly what Sharia Law entails, even though it’s a highly disputed doctrine even amongst Islamic scholars.

To my Christian friends, if Muslims are our “enemies,” my Lord told me exactly how I am to treat my enemies.

Some of you are reading and you think you are “above” debating political issues on social media. You’ve adopted a new kind of spiritual smugness I’ve seen in the past 18 months — the idea amongst many Jesus-y Christians who think that think 21st-century holiness consists of avoiding conflict at all costs, lots of god talk, and the mistaken view that Jesus did nothing much more than walk around bro-ing everyone.

My spiritual heroes are people like Bonhoeffer, who railed against Hitler for years before he came to power. Many thought he was being divisive and mean but he didn’t listen.

The women and children dying in the freezing Syrian desert.

The thinking of these spiritually smug brothers and sisters is either-or. So, either Jesus was this meek, quiet, dovish, humble, non-controversial Gandhi-like figure.

Or, Jesus was this angry, screaming, mean, divisive, hater.

And since Jesus can’t possibly be mean, he must certainly be nice.

I think niceness can often be the primary symptom of apathy.

What if Jesus just happened to be both? Kind and gentle and humble AND when the circumstances demanded it, outspoken and angry.

Lots of Christians think I’m being judgemental. I am. My Bible tells me to judge those in the church, not those outside the church.

Anyway, I blocked that Trump supporter from Facebook just now.

He bullied my friend.

I felt deep feelings of pleasure and victory in hitting the “block” button and maybe I shouldn’t have but I did and God knows I did.

I thought about this picture of Indiana Jones. Wonder if I could find it.

Ha! This one! It makes me think about righteous anger. 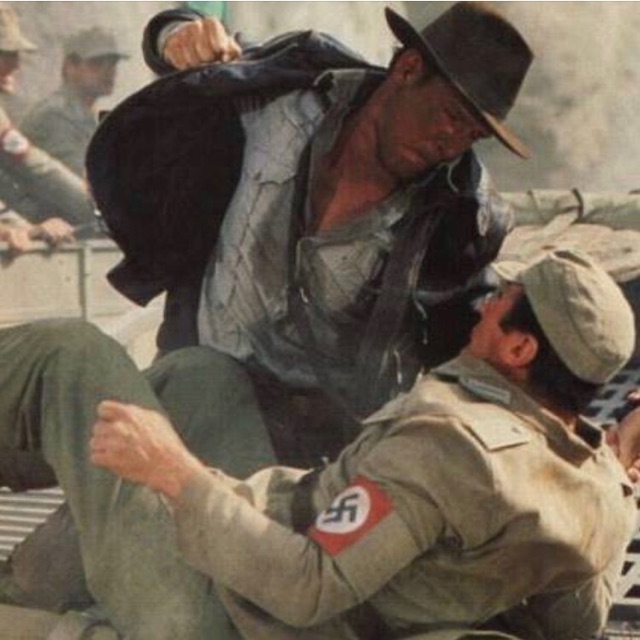 I’m sitting at Kéan. I’m looking in front of me. Probably 25 or 30 people. All white. I enjoy watching them. I don’t think they know I’m watching but I am.

For some reason the song Eleanor Rigby comes to mind. And the line, all the lonely people.

As I watch, I’m reminded that most people don’t really care about all this human rights stuff. And that doesn’t make them bad people.

I think these thoughts:

Not everyone held the convictions of MLK.

Some people care more about changing the world than others do.

But the Muslims executed in a mosque in Canada last week care. Their families care.

Orange County has the highest level of anti-Muslim hate incidents in the state.

Does continuing to speak out about this make any difference?

Will it help anyone?

I think more Christians need to embrace the truths found in the book of Ecclesiastes.

Read this the other day in chapter 9:

“I have seen something else under the sun: The race is not to the swift or the battle to the strong, nor does food come to the wise or wealth to the brilliant or favor to the learned; but time and chance happen to them all. Moreover, no one knows when their hour will come: As fish are caught in a cruel net, or birds are taken in a snare, so people are trapped by evil times that fall unexpectedly upon them.”

Muslims were executed last week. While worshipping in their mosque.

Our president hasn’t offered a word of comfort to the grieving families.

They were shot by a white nationalist terrorist.

I wonder how many Christian churches prayed for those Muslims who are grieving.

When Dylan Roof shot the Christians, many prayed.

I hope my anger is the righteous kind.

I can’t count how many freewriting exercises I’ve done over the years. Thousands for sure. I still do them almost daily. My kids know them well. I hope you do, too.

« Monday Musings: No Politics Here, Sofa Or Couch, The Necklace, Autopilot.» Let Our Hearts Break For “Them.”