You Will Not Sway Me.

Last night at 7:23 p.m. — after a very long day and being unsure again whether one drop of my work with The Christian Muslim Alliance was making a difference — I received a Facebook message. From an old work colleague. Evangelical Christian. Pro-lifer.

“Hey Paul… Thank you so much for sharing the posts you post. They have opened my eyes and gave me a new perspective.

“I only started to feel this because I was reading your posts. It annoyed me at first because I had a preconceived mindset. But as I read the posts… it mad sense. And my heart breaks… Don’t listen to people who would sway you the other way.”

Me: “So many people have basically told me to shut up. And that I’m just being ‘too political.’”

Me: “But people will die if we don’t speak out loudly.” 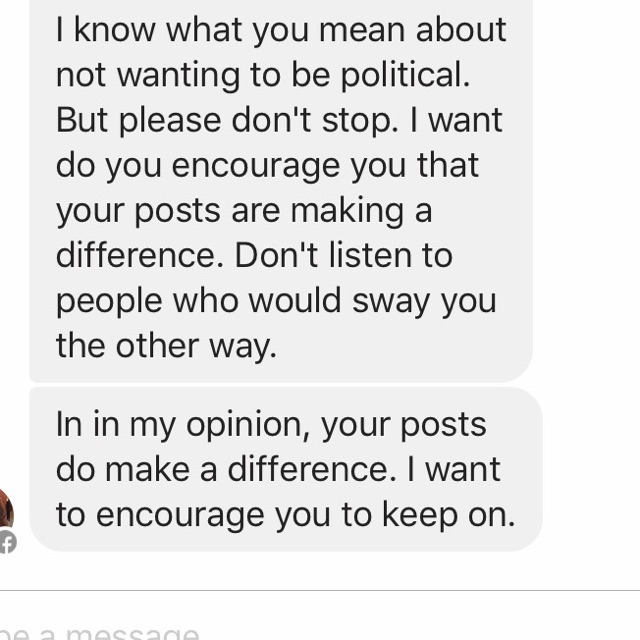 Over a year ago I started to speak boldly.

Because when a leader says repeatedly that a religion “hates us” and wants to ban 1.6 billion of them — and millions are the world’s poorest refugees — I take those words seriously.

Because if you saw a sinking boat full of women and children and elderly, many who are sick — when they are screaming and crying and begging for help, and there you are reclining on your cruise ship — you don’t philosophize over a martini.

You don’t stand there and just hope for the best.

You help. Whatever you can do. You might scream to raise awareness. And if you must disrupt the peace to mobilize others to help save these innocent lives, for the sake of others, you do it.

And if people don’t hear you, you scream louder.

And you really don’t care if people think you’re being “mean.”

And you really don’t care about the holy people who care more that you seem mean than the fact that people are dying.

Wannabe political philosophers didn’t like my screaming. And they tried to use their two-bit logic to win an argument.

As if me speaking on behalf of refugees was ever about winning an argument.

Many read my posts and disagree with my work colleague.

And they are more upset about my screaming than they are about those poor, homeless, displaced women and children refugees.

Or the women harassed because they cover their heads as an act of honor and humility.

Or the increase in hate crimes against Muslims that is skyrocketing since Trump came to office.

Or those murdered last night in a mosque in Quebec.

They would sway me into silence if they could.

That Facebook message couldn’t have come at a better time. I had spent much of the day at the protest at LAX. I was exhausted and then riveted to my core when I heard about another hate crime.

I don’t know how many thousands of people protested. Five thousand? Ten thousand? The energy was surreal and was so powerful and I don’t have the writing skill to try and produce a sentence to describe it because I couldn’t even come close.

We arrived. There was no band. No speaker. No performance. No hype. Just raw and spontaneous and peaceful chants and signs in opposition to the xenophobia I started writing about a year ago.

And I took out my iPhone and extemporaneously shot two live videos on Facebook.

A few hours in, I continued to stand and watch and hold up my “Christians 4 Muslims” sign.

Then I saw one of the few people wearing a hijab. Just there, smiling. Reading the countless signs. Drinking in the many chants like “Say it loud, say it clear, refugees are welcome here.”

Gina carried one of our signs that said, “Jesus was a refugee.”

I wondered if this Muslim lady had been a refugee.

I awkwardly interrupt. “Hi, I’m so sorry to bother you, but this is all so beautiful.” And I show her my “Christians 4 Muslims” sign and ask if I can take a picture with her. And she smiles and here we are. 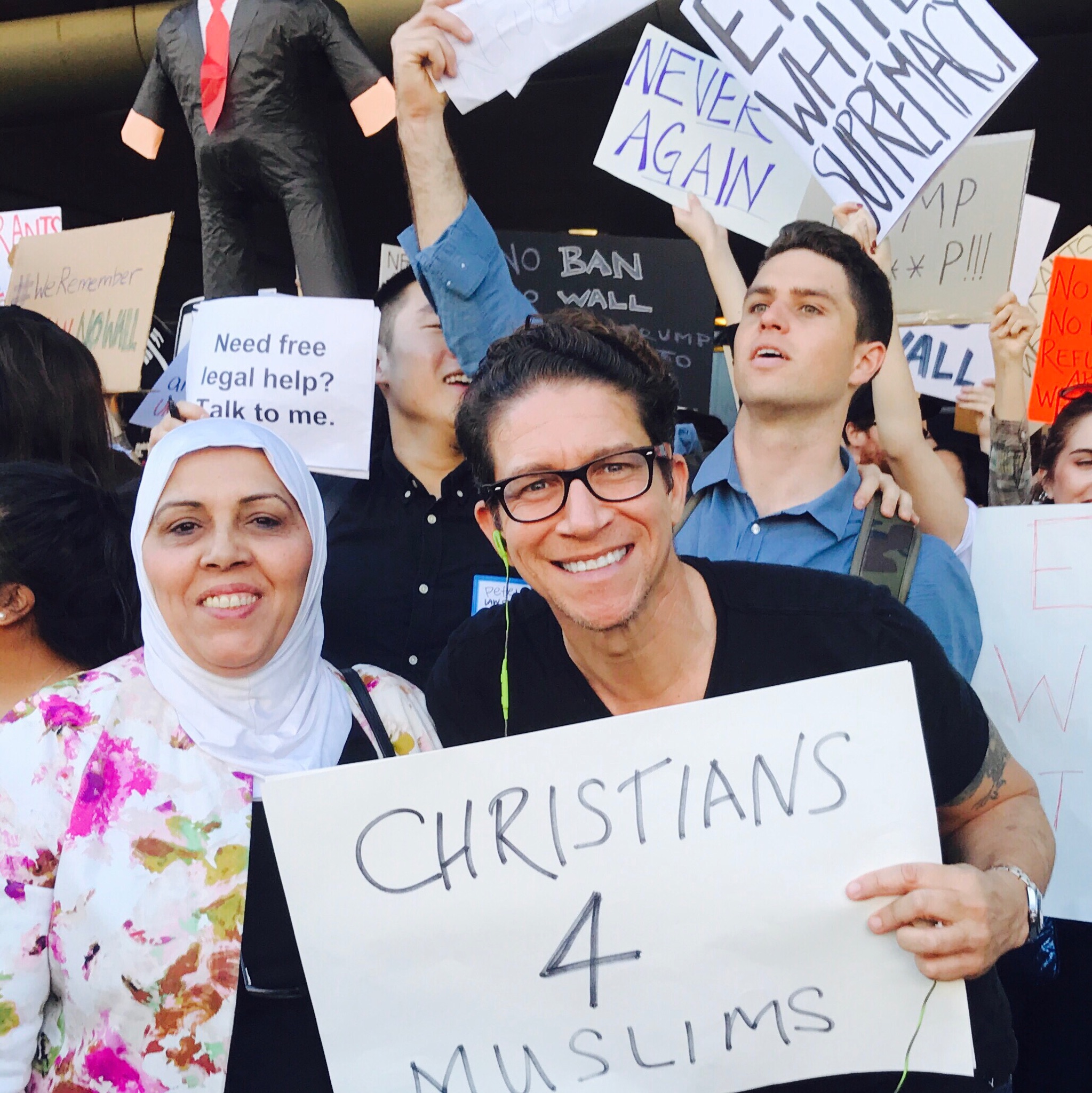 My mother’s family were like these refugees. Living in Italy after the war. Their village had been pillaged bu the Nazis.At that time many thought Roman Catholics were trying to take over the United States. Google it. My mother and her family were heckled and mocked for being having an accent, being Italian, being Roman Catholic.

At that time many thought Roman Catholics were trying to take over the United States. Google it. My mother and her family were heckled and mocked for being having an accent, being Italian, being Roman Catholic.

One of my uncles couldn’t stand it and couldn’t get a job so he changed his name from “Zeppetella” to “Baker” — because he saw a sign and thought baker sounded American.

Xenophobia’s nothing new. Fear and mistrust of people because of the color of their skin or the way their name sounds or how they speak.

Or where they’re from.

I’ve never been discriminated against for the color of my skin or the way my name sounds or the way I speak.

When I visit mosques today, I feel these people are no less American than I am.

But they are the outsiders today. Not the Italians. Not the Japanese.

Jesus is for the outsiders.

The politically correct term today used to discriminate against 1.6 Muslims is “potential terrorists” or “people we are not sure about until they are ‘fully vetted.’”

One group cared and advocated for the lost and poor and lonely.

The other group was big on God talk but ultimately neglected those outsiders.

In Amos 5 God said he hated their church services. That he hated (yes, hated) their worship songs.

They failed at administering justice to those who needed it the most.

These refugees are being shut out with this new Executive Order. But many, millions, aren’t having it. Call them liberals. Call them what you want. They are standing and protesting and marching for those most oppressed because over 80% of evangelicals decided to elect that man who rejected millions of women, children, sick, elderly, leaving them in tents in a freezing cold desert.

I hugged the kind Muslim lady and thanked her for the picture.

I then looked across at the parking structure and the bridge. And took this. 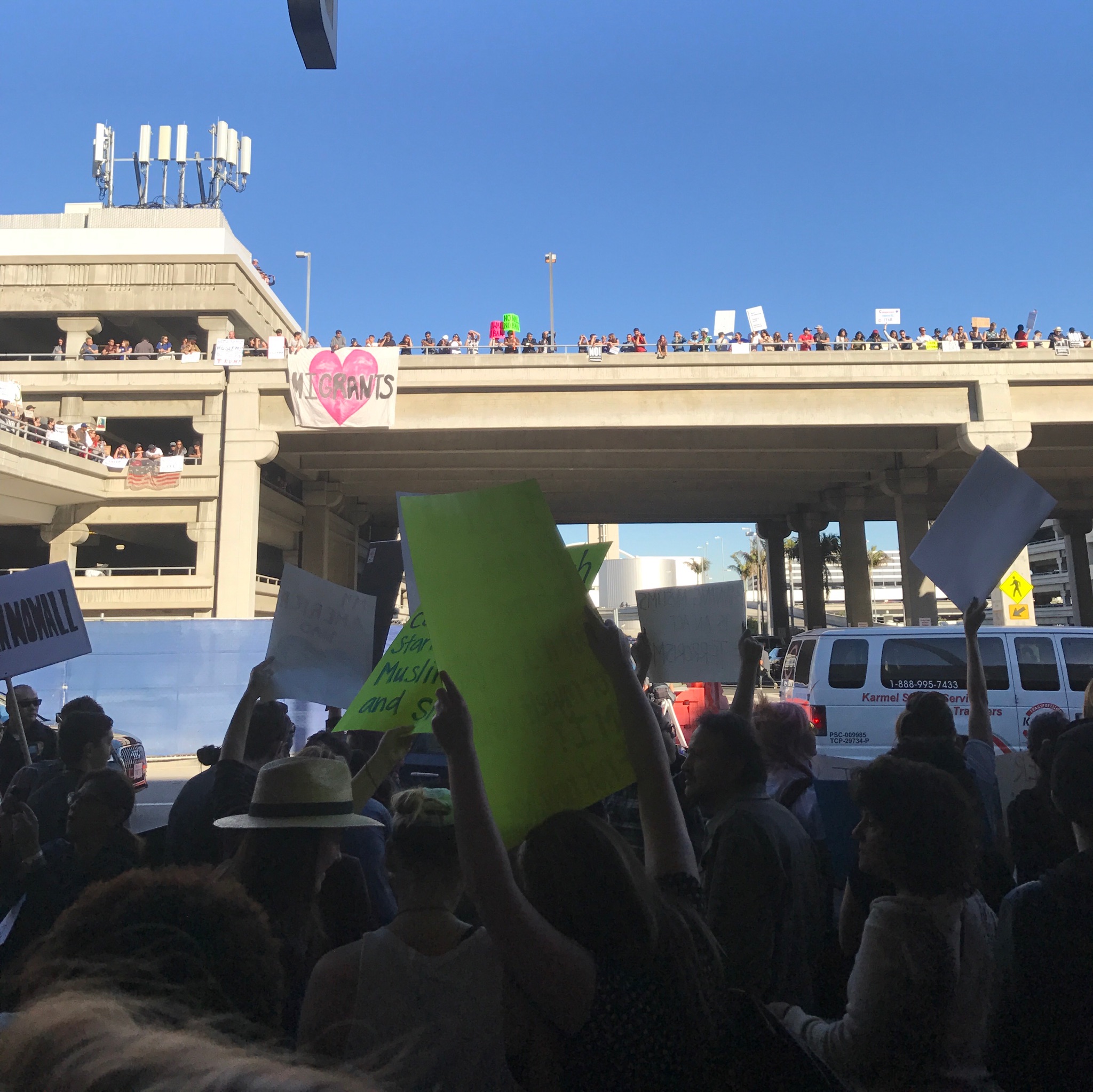 There was a counter protest. It was behind that white van. There were 9 people.

There was an older fellow with a sign that read “Trump Is Love.”

All these thoughts racing through my head.

How is Trump, love?

I wish more of my Christian friends could be here.

This protest is so big and it makes me feel so small.

These protesters are overwhelmingly Caucasian. They are not Muslims. They are not in this for themselves, they are in it for the others.

Wonder how many pastors, especially of evangelical churches, spoke up today on behalf of the refuses in their in the same way we are?

Just now just someone just commented about me on my live Facebook video from yesterday.

“I feel sorry for this man. He lacks wisdom and knowledge and he has no authority to speak on this subject.”

I hold undergraduate and graduate degrees in the philosophy of religion and ethics.

But I guess he’s right inasmuch as I do lack knowledge from time to time.

And I’m certain I lack knowledge.

But I will not stop.

He will not sway me.

« I’m Saying No To Fighting Friends And Family.» Monday Musings: No Politics Here, Sofa Or Couch, The Necklace, Autopilot.