Last night I went to a play with Gina and freinds. Afterward we took this picture. 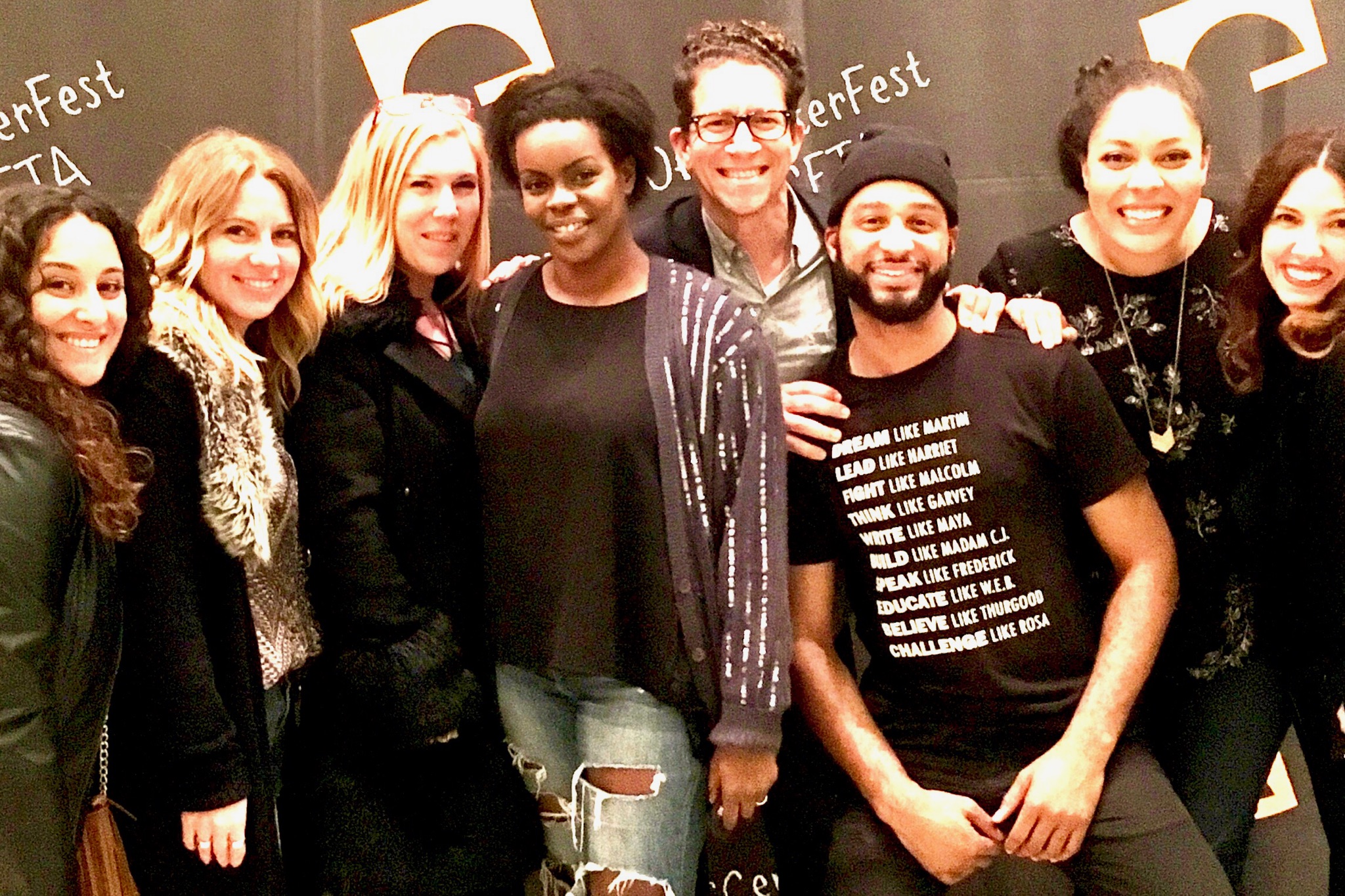 Had no idea what the play would be about. Soon found out it was about police brutality. One black man on a stage. His name was and is Keith Wallace. He’s the guy in the picture. I liked his shirt and want to find one and wear it.

He told a story. Acted it out. About what it’s like being black in the city.

At one point he said “Everyone’s afraid when they get pulled over by a cop. But when you are a black man you are afraid for your life.”

I’m white even though I’m Mexican. I’m white to everyone else. Brown hair. Blue eyes. I’ve never been afraid for my life when I’ve been pulled over. Never.

Can you imagine? Stop. Imagine. Afraid you’re about to die.

There was a discussion afterward. Really great audience participation. My friend Kristen has two black boys that she and her husband adopted. At the end she shared something. When they boys are playing outside and dusk comes, it’s time for the boys to put away the airsoft guns and come inside.

Because accidents happen if you just happen to be black; the odds of being killed by a cop go up. So you protect your boys.

Some older white lady responded. Said something like, “Oh, I do the exact same thing with my grandsons.”

She might do the same thing as Kristen. I did with my boys. “Guys, it’s getting dark why don’t you come inside.”

But I was never afraid my boys would be shot. Neither was that rude lady afraid.

And that we sometimes don’t feel comfortable with people that are different.

On Facebook this week an old friend said he liked the “old Paul” better. Not the one with political views, but the old pastor Paul.

I told him that this is the real me.

The old pastor Paul had a muzzle on his mouth. I couldn’t write or say what I really think because when you’re a pastor you might get fired for stuff like that.

And I’m a Christian in disarray. I will write more about my valley this year. But I’m afraid to be honest about where I am. David was honest. Solomon was honest. But today’s mainstream evangelical party line is to hide your disarray.

Don’t like being judged by the holy people who are not in disarray. Or unwilling to talk about their disarray. I still have my faith.

But what’s God think when half your “brothers and sisters” support a hateful and godless and sick leader… what the hell do you do? Because, get this folks, the Christian thing 2,000 years ago was precisely about fighting for the rights of those down on their luck.

Making sure poor folks have insurance so they could treat their cancer.

Stuff like that. And all these white Christians don’t give a damn. All these Christian Republicans raise their hands in worship and support this rot of a leader who stands against “losers.”

I’m a Republican disarray. But I am still a republican. Not leaving anytime soon.

Listened to President Obama’s speech on NPR after yoga on the way home Tuesday night. And tears burned my eyes. Broken family. Grew up poor. Black. No privilege. I admire him. As a man. As a thinker. As a husband and father.

I hope my children find that speech on YouTube. Bookmark it or whatever you do to save things in YouTube. And I hope they play it a hundred times because listening to that stuff will make you strong. Makes me want to be a better man.

And I couldn’t help but contrast him and Donald Trump. His decency. The inspiration and hope he instills. Then Trump the next day. Angry.

They each point their fingers when they speak. President Obama points often up. Uses his finger to underscore service, fighting for justice, being a better person, not becoming bitter.

Trump points into your face. Points like a dictator. Like a possessed angry dictator. He points with the most charisma when he’s verbally assaulting whomever he is deciding to assault that day — whoever said something bad about him, even if it’s the CIA or FBI.

What your worse pet peeve? And where did they come up with the name pet peeve?

For me it’s when people use their windshield wipers when there’s little or no rain. Especially when they put in on fast. All that rubber rubbing against the dry or barely damp glass. “Don’t they notice that it’s making that noise?!!!”

In my twenties I lived in a guesthouse. And the owner was rich. And my room overlooked the driveway. And almost every day he’d start his car and put the wipers on high and squirt them. Then he’d just sit there and read the paper in the driveway or talk on his cell phone. Wipers left right left right squeak left right all day every day and I just looked down because I couldn’t not.

One day I plucked up the courage to put some clothes on, walk down the stairs, and, as if I happened to just be passing by on my way, told him I had heard that the rubber couod ruin the windshield if overused.

He just glanced up and said thank you and kept reading and next day, same thing.

I can’t count how many freewriting exercises I’ve done over the years. Thousands for sure. I still do them almost daily. My kids know them well. I hope you do, too.

« I Resolve To Do These 17 Things In 2017» Monday Musings: I Cried, I Was That White Moderate Pastor, Tomato Basil Sandwiches