I’m Saying No To Fighting Friends And Family.

Just over a year ago, I started my blog. I decided, and I was encouraged, to be myself. To write exactly what I thought. Just write about things in my life that matter to me. And just figure it out along the way.

One close friend I respect told me I’m most effective as a writer when I’m being vulnerable and honest.

So I got to it. Started posting regularly on my blog and FB. I wrote a post about my very raw feelings associated with the grief of my mother’s recent stroke. That post was shared over 1,000 times. I wrote about the challenges being a single dad.

Then the presidential campaign began. And I started to write down my honest feelings about that.

Soon, the activist-Paul started to arise — the one who sold his home in 1999 to launch a nonprofit to teach young people the link between Christianity and social justice. The one who put thousands and thousands of teenagers on school buses, over the course of 5 years, into the poorest areas of Orange County, to show them how to serve in the other Orange County.

As the presidential campaign intensified, so did my feelings. And I wrote those down.

I wrote sometimes using hyperbole and deliberate satirical exaggeration — techniques to jar people’s imaginations from thinking I believed to be false and dangerous.

Some didn’t like it. Some did. But I wrote what I thought.

I wrote knowing that many of my Christian friends wouldn’t be happy. Not just because of my views, but because of my style. I think many maybe wanted me to be a Christian writer, versus a writer that happens to be Christian.

Some of these Christians believed that political involvement is anti-Christian. Or divisive. Or, an inferior modality for changing the world.

But I put my head down and followed instead activist heroes of mine like Saint Francis of Assisi, Dietrich Bonhoeffer, Martin Luther King, Jr. — people that put their very lives (and certainly their relationships with friends and family) on the line as they stood up to power and injustice.

I posted this Elie Wiesel quote on Facebook and Instagram and it remains a guiding light for me today. 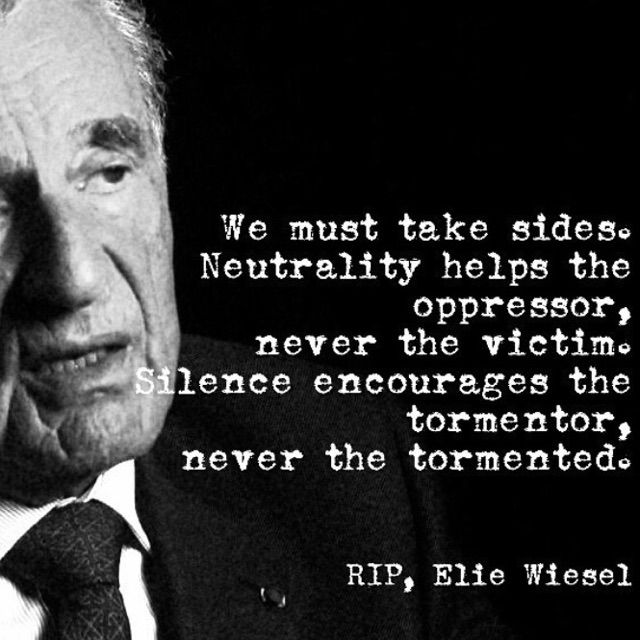 (What is becoming most alarming to me is the neutrality of Christian pastors who continue to choose to keep their mouths shut in the midst of increasing incidents of hate crime, racism, xenophobia, degradation of women.)

I wrote not with my friends and family in mind, but the nation and the world. That just means that I wasn’t posting to challenge people I knew; I was writing so that people OUTSIDE of my preexisting network would think about what I had to say.

I wrote with my very deep belief in the power of words to change minds, to create war and to stop war. To heal and to mend. To incite or pulverize bigotry.

Some didn’t like it. Some did. But I wrote what I thought.

I wrote knowing that so many good-hearted people prefer silence, prayer, peace at all costs.

I wrote as a firm believer in my First Amendment right to free speech.

Friends, I haven’t always gotten it right. But I have written the LITERAL thoughts I have in my mind. You have heard from the real me, not one who has spent most of his life trying to please everyone. And in writing these thoughts, I have believed deeply my words were better than silence.

In the process of my being myself, it’s become clear that those closest to me — especially conservative Christian Republicans — haven’t liked my views. Even though I’m a lifelong Republican and see most of my deepest political passions driven by the teachings of Jesus, and his radical care for outsiders — for the poor, refugees and minorities — so many Republicans I know don’t think like me.

As a consequence of expressing myself, I started hearing rumblings like, “What the hell happened to Paul?” or that I was alienating my friends.

That made me sad.

But I came to learn that this is EXACTLY what happens to writers. Some people agree what you have to say, some don’t. And those closest to you — family and friends — are especially most affected by your expression. The whole prophet in his own town thing, I think.

I will no longer debate with family and friends publically on social media. It doesn’t feel right to me. Not because I don’t have responses (I most certainly do) — it’s that to respond fully, with my honest voice, feels like I’m fighting with someone I love, publically.

I don’t want to do that anymore.

And in the months ahead, as I continue my work as a writer, activist, leader of the Christian Muslim Alliance, I plan on speaking even more honestly about what I’m feeling.

So I’d like to respectfully ask friends and family — those who know me personally — to message me directly to discuss something you might disagree with. I’m VERY happy to respond.

But I won’t be debating on anymore on social media with you.

If you want, you could simply make it so my comments don’t end up in your newsfeed. All you have to do is go to my page. In my profile picture there is an option to unfollow. Or you can unfreind if you need to.

But I hope you don’t. Because in spite of our political differences, we are still friends.

Love to you all.

« Some People Honestly Don’t Care — Thoughts on #womensmarch AND #whyimarch» You Will Not Sway Me.