Finding My Religion, A Journal (Part II): Rebellion, And Those Parents

This series smatters thoughts on my journey with religion, spirituality, God. My disjointed inklings will be separated by these three marks: * * *. I try to put it all in sequence. But sometimes I don’t know even the sequence. So you have my apologies in advance for all the lack of flow.

Younger Christians. By the millions. High school students. College students. Twenty-somethings. They’ve rejected the religion of their parents. I’ve seen this for decades.

I don’t think it’s Jesus they’ve rejected. I think it’s the religion of their parents.

I posted this on Facebook yesterday. A friend named Josh responded in pithy clarity. He proves the point. People can come to reject the religion their parents (and pastors)  tried so hard force down their throats. 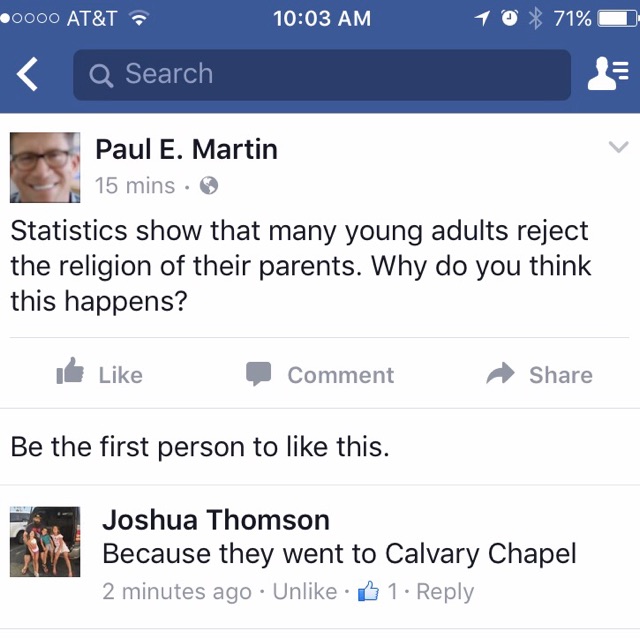 Being a father has taught me more about God and spirituality than everything else.

And being a father has made the understanding of love both deeper and more complex.

It begs the question, what does it mean to love?

I’m increasingly intrigued by the way God gives us radical freedom. If God is ultimate love, he seems perfectly content to let his children fall down and scrape their knees (to say the very least).

You do care. That’s why you’re screaming.

Parents’ voices are loudest concerning matters of importance. And the most important thing for most parents is to keep their children safe. Safe from physical danger. Safe from emotional danger.

And even if you’ve moved out or if a parent is deceased, you still hear their voices, lecturing, warning, advising.

More than any time in my life, I’ve realized just how intricately linked fear is to religion.

I’m wondering more and more what safe means with respect to my own faith journey.

I believe firmly that it is the job of parents to teach children and shield them from real dangers when they are younger.

We protect that which we love.

My faith journey today is so marked by what I’ve seen and experienced: what my parents did to me, what I’ve done to my children, and watching other parents parent their children.

I’ve seen the sad outcomes when dogmatic religious beliefs are forced on children.

How people establish their faith, as adults, is not scientific. Millions of people came from oppressive and abusive homes, yet developed rich and authentic spiritual lives.

Millions of people were indoctrinated and sheltered by conservative Evangelical or Roman Catholic parents, and today are repulsed by the religion of their parents.

Some parents want their children to be sheltered from the opinions of others. So they shelter them. They send them to certain kinds of schools. They try to make them have certain kinds of friends. And when they become 18 they utilize techniques to try to ensure the kids continue to live sheltered lives.

Does this make the children safer?

The very highest proof of authentic spirituality is to accept your children for who they are, especially when they start thinking differently than you.

Some adults think they can control outcomes in the lives of other people. There are recovery groups for this disorder.

Some parents think they can control the outcomes their teenage or adult children by trying to over-control them. Often using guilt and shame.

And teenagers will turn 18 and move away anyway and if they’re too sheltered, they are bound to rebel. Seen that happen hundreds of times.

Our parents’ voices are implanted into our heads — literally. Because our brains have this remarkable (for better or for worse) capacity to remember, to almost record, words.

Most parental advice is good and instructive.

But some can be total nonsense

Problem is this, parents — teenagers are a generally a heck of a lot smarter than today’s parenting “experts” give them credit for. They see right through hypocrisy and illogic.

They see through tactics parents use to try and frighten them into submission.

They know it when a parent is pitching a dogma of which they know very little.

Teenagers have raised families and fought in wars and run businesses for most of civilization.

Today they can’t even ride a bike without a helmet or take an aspirin at school if they have a headache.

This is not to deny that they (especially boys) can struggle with decision making with respect to impulsivity. But, still, they are smarter than most parents give them credit for.

And titling a book Yes, Your Teenager Is Crazy, is crazy.

As long as you think you know it all and your teenager is crazy, you are doomed to create a dependent and confused teenager.

Thinking your teenager is crazy is not a good way to lead with respect.

Many of Jesus’ disciples and followers were likely teenagers.

Jesus treated them with respect.

There’s a popular Bible verse that goes, “Train up a child in the way he should go: and when he is old he will not depart from it.”

And so many of them depart from “it.”

The good news is that the book of Proverbs is what biblical scholars refer to as wisdom literature. That just means that these verses in Job and Psalms and Proverbs and Ecclesiastes and Songs of Solomon and Lamentations are not to be taken literally.

Thank goodness it’s literature because it’s simply not the case that children don’t depart from their parents’ training.

I don’t think young people should abandon the faith of their parents. But to abandon their religion in many cases is a very good idea.

I also think it might be a good idea for many adults to consider abandoning their religion.

If you are one of those who have rejected the religion of your parents, I think you need to make a logical distinction. Just because your parents had certain beliefs about Christianity, it doesn’t mean those beliefs represent Christianity.

It’s never prudent to, as the saying goes, “to throw the baby out with the bathwater.”

As a parent, I was always very careful to teach my children about the difference between belief and knowledge. I was careful to always tell them that faith is not the same fact.

Do you understand the difference?

That faith is — precisely — something for which there are no facts?

Many adults, parents included, didn’t know the difference between belief and knowledge, or faith versus fact. So the existence of God, to them, is something you could know. It’s a fact.

This mistake in thinking creates all kinds of problems. Here are a few of them:

One, you end up dividing the world into two types of people: those who think like us who know what’s true, and all those others who “believe a lie.”

Two, you end up fearful of “all those other people” that don’t share your beliefs.

Three, you are not just fearful, you are threatened.

Four, so you end up in an echo chamber — surrounding yourself only with friends that believe as you do.

Five, you become proud and arrogant because what you believe is right — you are better than them because you are right and the others are wrong.

So atheists are stupid because they don’t know the facts.

And Jesus is the only way to heaven. So all the Buddhists are bad because they are on the wrong side of truth.

I would tell my kids, “I am not a Buddhist. I don’t accept some of their teachings, though I honestly don’t know very much about what they believe.”

I would also say, “I assure you there are remarkably smart Buddhists or Muslims or Roman Catholics that are as certain about their faith that I am about mine.”

I wasn’t afraid to let them wrestle with it all.

But I did train my children. I was a pastor for much of the time. I trained them to understand the richness of the Christian tradition, Roman Catholic and Protestant.

I had mine belief — the Nicene Creed. I still believe it.

I left room for ambiguity, even though I was a Christian leader.

I was always careful to never ever ever say things like “Roman Catholics are wrong about the bread turning into the actual body of Christ.”

“But does it, Dad? How can it?” They’d ask because I sent the boys to Catholic school.

“Well, certainly some remarkably smart scholars would belive it does.”

Then I’d get an excuse to try and explain Aristotle’s substances and accidents and how they established the doctrine of transubstantiation.

When you look at Jesus, you see something beautiful. Radical love. Inclusion of outcasts. Someone that wasn’t impressed with the powerful.

When you look at the religion of many Christian adults, including parents, you sometimes see something sad and dangerous: Exclusion of outcasts, endless comments about all those bad and wrong people that don’t think like us, lust for money and status and power.

So the children of these “devout” parents grow up with a contradiction. Out of the mouth of mom and dad you hear all this talk about the importance of going to church on Sunday. Believing A and B and C because they are true. Don’t drink. Work hard in school and sports and ballet or piano or whatever so you could become rich or famous or powerful. Or, “successful.”

But what is success?

What is spiritual success?

The echo chamber is getting larger and larger.

Most want to hear that which already confirms their set of beliefs.

Conversely, they do not like to hear anything that challenges their set of beliefs.

If you are one that feels resentment and animosity at your parent’s modeling of spirituality, know that they almost assuredly acted out of love. We want to protect the things we love. People act out of fear. Especially parents.

I want to write this sentence a million times — if you’ve rejected faith because of the hypocrisy you’ve seen, consider doing what Josh did when I posted this on Facebook yesterday. 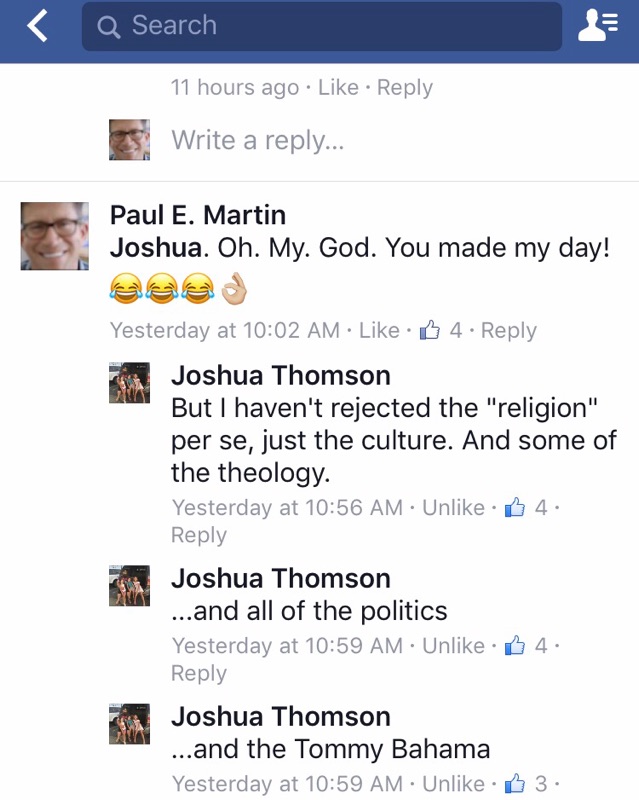 Josh threw out the bones. He kept the essence of the religion — the spirituality and not the dogma.

And not the Tommy Bahama.

I think Josh got it right.