Late start. Need to drink this latte. Then go to that silent Bikram class at 9.

Maybe today I’ll take some pictures of things. Then I could write about those things. What would I take pictures of? I could take a picture of that guy sitting there reading a novel. 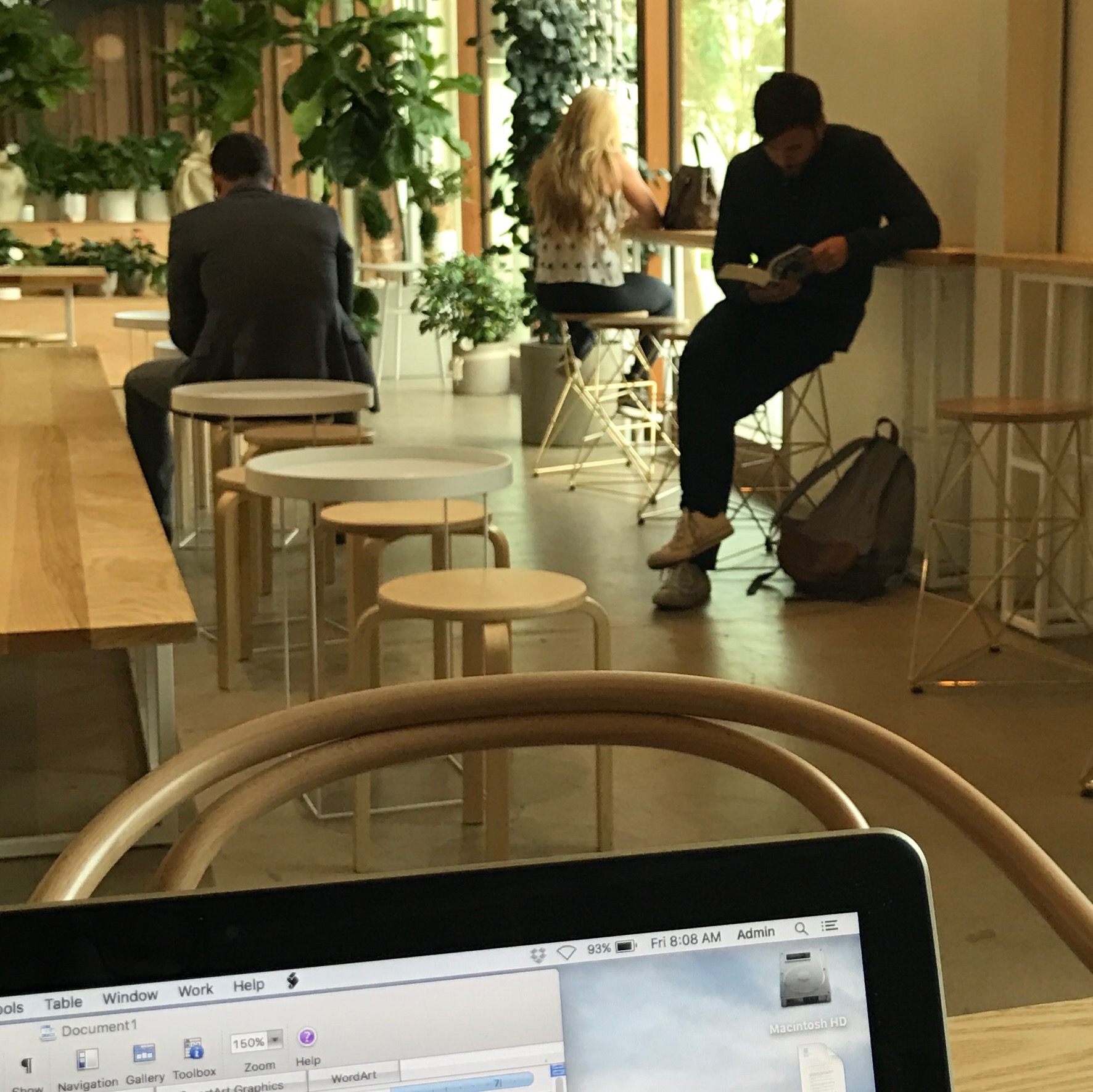 Looks like the title is Catch-22. He has a great pose going on. But I don’t think pose is the right word. I think the word pose requires intentionality. Posers are people that try really hard to imitate someone else.

So a poser he is not. He just looks naturally good reading Catch-22.

You don’t see many people reading novels anymore. I don’t read novels very often. They take a very long time to get a point across. I’m a non-fiction guy these days. I’ve never written fiction. I don’t think I’d be good at it. Maybe I’ll try.

I never thought I would meet her. Then I did. She stands next to a white Porsche. In her white dress. With her white pumps. And her white Channel handbag. Smoking. And I realize that cigarette and its smoke replicate the rest of her white color scheme. She’s waiting. It’s clear she’s impatient. Because she focuses on her watch over and over again, in a jerky motion. She smokes like a pro and I wish I didn’t think it was sexy…

Anyway. It’s embarrassing to let anyone read that lame attempt at fiction. But what the heck.

I spent the evening on Wednesday talking about love with my atheist friends. De Botton weaved together a novel and a non-fiction called The Course of Love. It was a story about a man named Rabih and a lady named Kirsten. They were Scottish. They met and fell in love, then went through all the common things that can happen in a marriage. And throughout the story he’d insert these paragraphs to explain love.

Everyone tries to explain love but nobody ever really gets there. Love is the one power, force, reality that even defies explanation. But I know love must include suffering.

That’s why everyone struggles with family during the holidays. Because love — we love our family members. They annoy, hurt, and yet we love. We annoy them, and yet they love.

Whatever love might end up being, it’s hard to break its bond.

For three reasons, I’m not too worried about Donald Trump these days.

First, I don’t want to be a complainer. He won. Like it or not. Plain and simple. The people spoke. And we don’t use the popular vote and we never should. And if you think we should you need to read about why we don’t use it. Representative democracy. The worse form of government, except all the others. I don’t want to be a sore loser. But I believe America, and the world, lost. I will write more about Trump in the months ahead, but I want to do it in a way where I don’t seem like a sore loser.

Second, the main reason I wrote and spoke against Trump before the election was to do my civic duty. I was trying to persuade people to reject Trump through my right to free speech. To my Christian friends, I was doing everything in my power to tell you that you can’t vote for a man like this and call yourself a Christian. Or you can, but your loyalties are to the Republican party more than they are to the teachings of Christ. But after the election, there was no reason to persuade anyone. Again, he won. He will be our president. I will pray for him the way the scriptures tell me to. Unless he is impeached, I will use my same voice again in three years to persuade people to dump him, no matter how great people think he has made America.

Third, our system of government makes it very hard for aspiring racist, sexist, xenophobic dictators. To my Democrat friends, say what you want about some of the Republican leaders, they are not as erratic and thoughtless and Trump. Most are civil and smart and good. Just like most Democrats. These Republicans understand the constitution, unlike Trump. And Trump’s kids, I think, seem pretty normal. So if Trump turned out to be some Hitler-like fascist when he comes to power in January, the people around him, I’m fairly sure, would make it very difficult for his agenda. In short, I trust our system.

The Friday 9:00 a.m. class is different than the all the others. It’s a 90 minute silent class. No instruction during 26 postures. My friend Jason, the yogi, is teaching the class, only by observation. He’s in front doing the postures. We follow him.

I was listening to Sarah McLachlan on the way to yoga. Her Wonderland Christmas album. O Holy Night when I got out of the car and walked into class. And it was cloudy and cool and I felt calm warm and wintery inside.

What do I mean by drug music? Seems there is certain music (certain songs) that bring eeriness, darkness, complexity. Lots was written in the 1960s and 1970s. I think drugs were part of many of them. White Rabbit and The End. It’s heavy stuff.

Class started with Riders On The Storm by The Doors. With that Fender Rhoades. And that bass line. And that eerie sound of rain. And I think the song was about a murder.

Into this house we’re born. Into this world we’re thrown…

Doing these postures in 115 degree heat to those sounds is an entirely new phenomenon. And these words. And it all just feels different.

And then a few minutes later during trikonasana I think it was The Doors again — Break On Through To The Other Side.

I found an island in your arms

Country in your eyes

Arms that chain us

Break on through to the other side

It could mean so many things,

And I’m out of breath. And the music is loud. And Jason is in front of me. And he is a master. And I’m in awe at his postures. And I’m not supposed to compare. And my mind wonders to other things.

And I have these thoughts…

God, the power of music.

This drug music has utterly changed the quality of this class. Everything else is the same as every other class: the room, the lighting, the temperature, the yogi, the postures. But it is an utterly different class. The same class but a different class.

A certain kind of music is deeper and more complex than other music. And the peaceful zen music is wonderful. But here and now… when you mix deep and complex music like this drug music with 115 degrees and impossible to hold postures it does something to your brain. Not your brain, your mind.

Then I get this picture in my mind. I’m going to write it down right now. 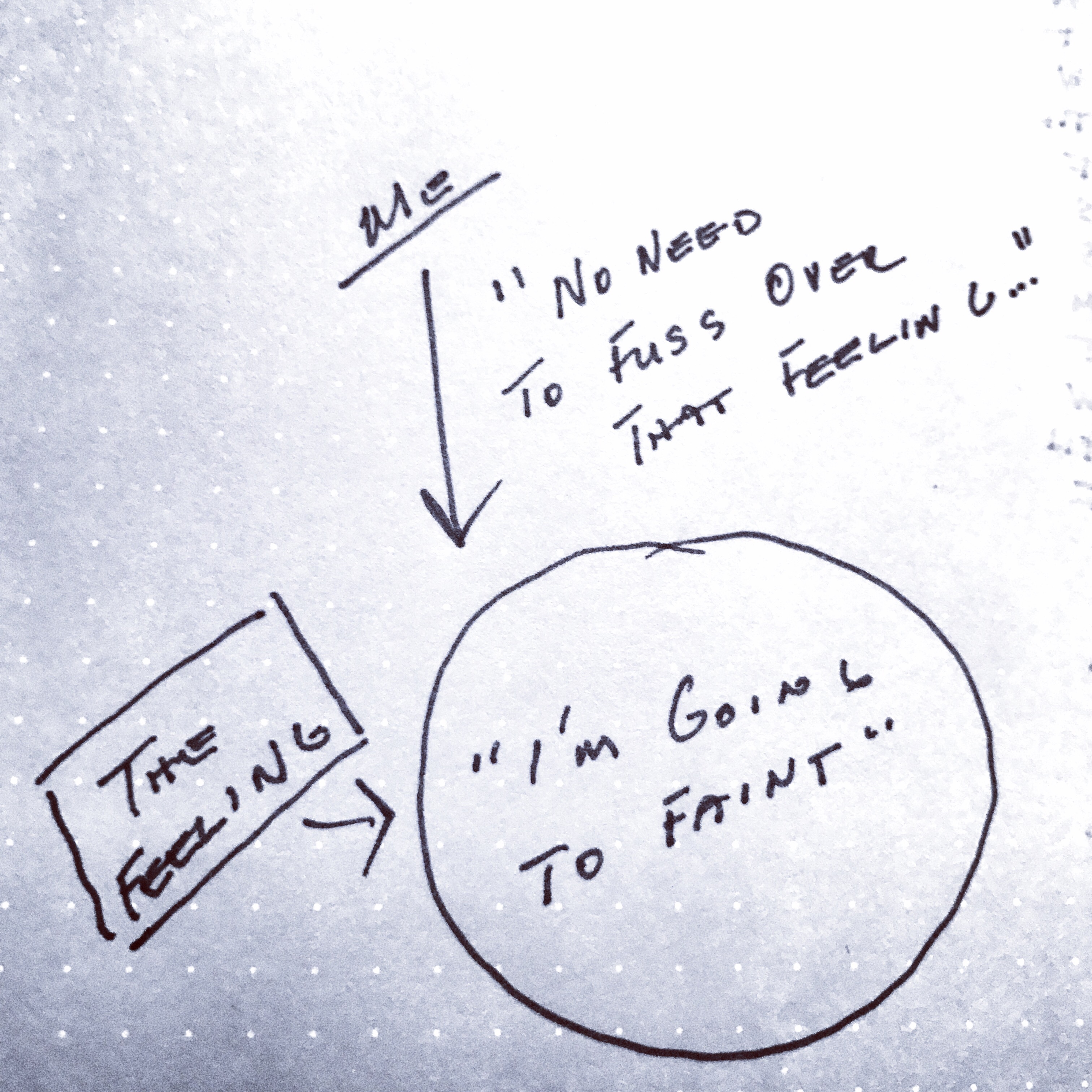 Then I think this.

I am not my feelings. Sure, I have this feeling of wanting to faint. There it is. That feeling. Right there. There it is. But I’m not going to fuss over it.

Then I breathe calmly and relax my extraocular muscles, and remove my tongue from the roof of my mouth.

Then we move to the standing series. The one that hurts the most. And the music moves to Kashmir by Zeppelin. I want to faint again.

Oh, pilot of the storm who leaves no trace, like thoughts inside a dream…Heed the path that led me to that place..

To my Christian friends. Remember “backwards masking?” Remember if you play Stairway to Heaven backward, there is a message about Satan or something like that?

And I have these thoughts…

Listening to those tapes about the evils of secular music when I was a teenager was unfortunate. If for no other reason than all those Beatles albums I broke and burned in the fireplace when I was 16.

Plant’s voice is eerie and scary and cool.

They are so tight.

And suddenly I’m in that place of calm and the class is over.

I just burned 900 calories. I take a shower. I’m shaking in fatigue and reveling in the power of that experience. And in the power we all have to let go of whatever pain we’re feeling.

Then I’m in the parking lot. And I hear a man yelling. Almost screaming. Almost blood-curdling yelling. In his truck. And I feel for him. I take this picture. 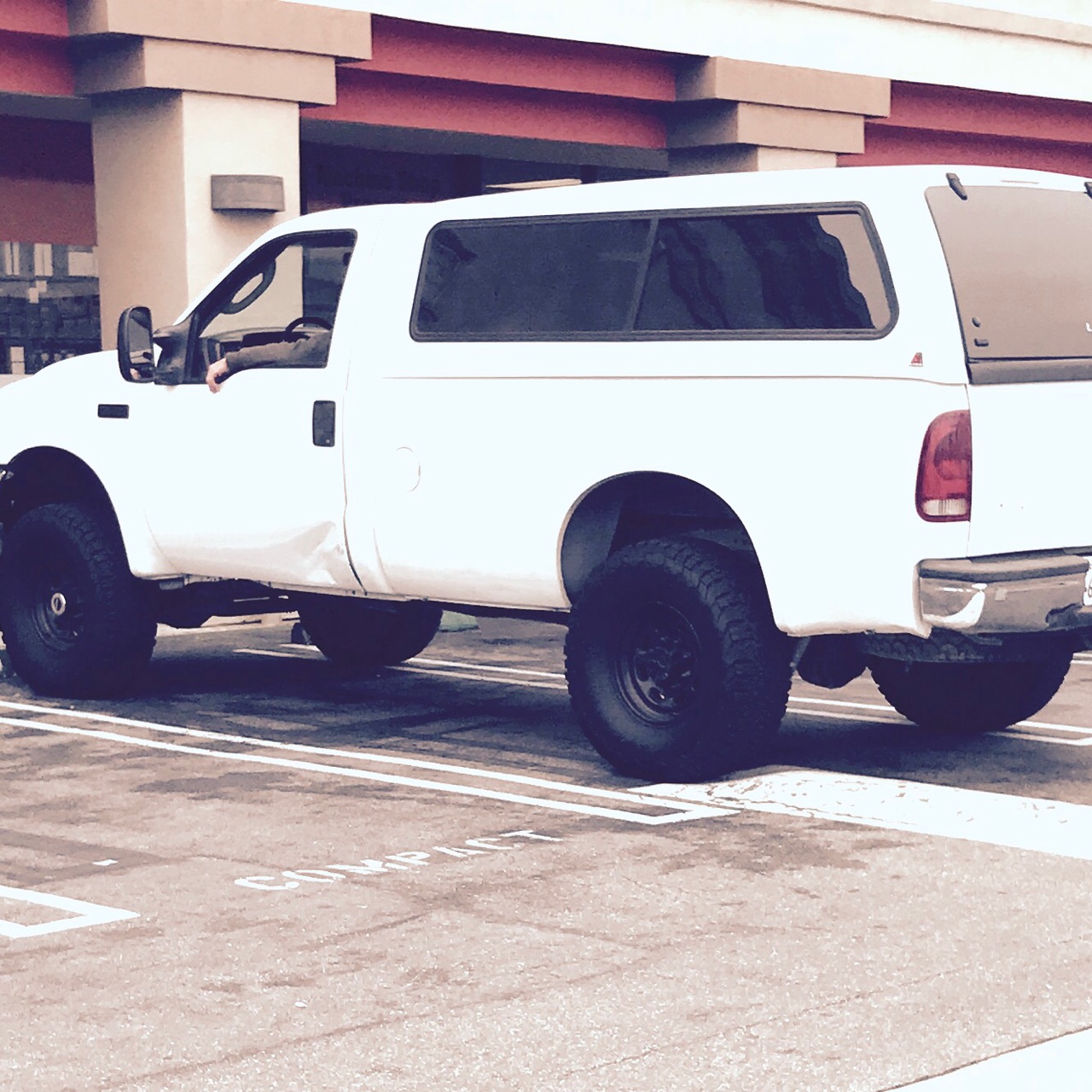 We’ve all lost it before. And when we lose it like he lost it, we are not longer in control of ourselves.

We become our feelings.

I want to tell him about how we have a strange capacity to not to fuss over our feelings.

But I didn’t. I turned on Sarah McLaughlin again and drove away.

Yoga is all about being a poser. 😉