I went to yoga today and realized once again that if you can relax your extraocular muscles during a 90 minute 115 degree Bikram class, you can do almost anything.

Because it’s easy to jog. It’s easy to do some pushups. Or stand tall. Six second inhales and exhales. Hold a posture. Strain.

Most of us can do that stuff.

We are good at straining when stuff’s hard.

But to let go?

Especially when there’s pain or frustration or agitation?

Relax your clenched jaw when the baby is crying?

When the asshole won’t let you change lanes to get off the freeway?

When family dynamics are at their peak during the holiday?

But that cluster of muscles in your head that hold your eyeballs in place. We are usually not remotely aware of those muscles. During the most grueling posture, during janushirassana, if I can bring myself to relax those muscles, my anxiety drops. I complete the posture. I’m okay.

I remember sophomore year. Coach Owens. “History teacher” (also known as the coach who they made teach something). He told us he hurt his eye once. So they popped it out of the socket. I don’t remember if he needed some kind of shot to relax his extraoscular muscles. The eye doctor, allegedly, placed the poped-out eyeball onto a tiny table next to his nose.

He told us he was looking at his face with that popped-out eye.

I never believed him.

Saw mom today. She calms me. I made this pic black and white. I don’t know why I just did. We were looking at one of her favorite nurses. 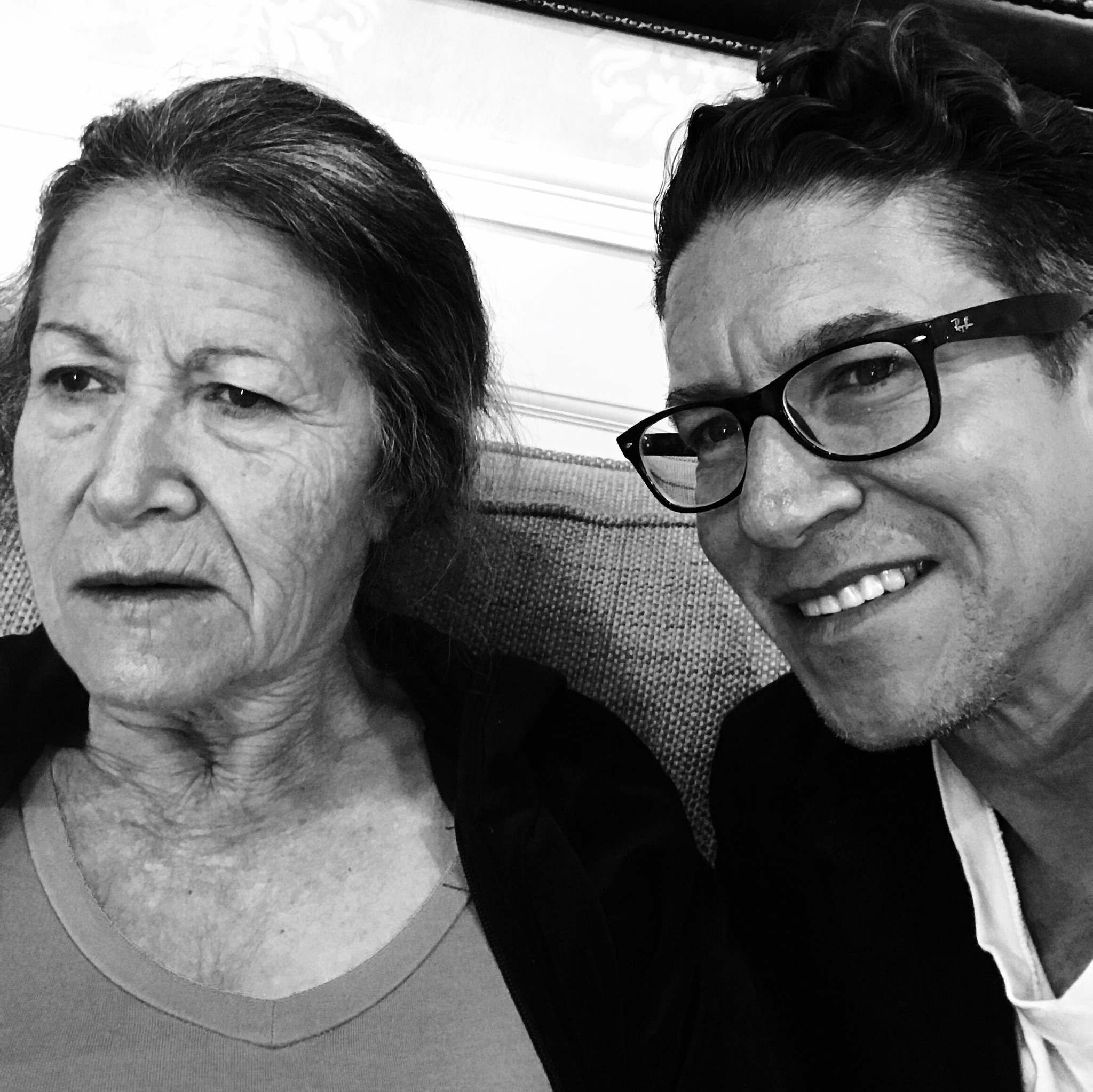 Earlier I was at Kéan and I wrote this…

They live to not die; I want to live to live.

Late night runs in the dark cold. Haven’t done that in a while.

Listening to the music my teenagers listen to. Like Kanye West. Listening to him more and more.

Acting undignified now and again. I might act undignified this weekend for our two Beer and Carols shows.

Last night I was thinking about something I would write today. I do remember thinking Paul don’t forget this… it will be great for freewriting tomorrow. Then I convinced myself (snuggled tightly and with my head in one of those perfect positions on the pillow) that I would remember. Couldn’t afford the 10-second effort.

Now those thoughts are gone.

Weird how we can forget some thoughts but not others. People sometimes tell you, “just forget about it.” As if we can merely choose to forever lose a thought in the same way we flush a tissue down the toilet.

I talked to Justin Borland on the phone yesterday. He’s the guy with the sign. Told me he had no intention to reach anyone but the Muslims in that mosque. So he faced them with his sign. From the sidewalk. You wouldn’t have been able to see his sign from the street because it was facing the mosque. After the prayers, some people were leaving in their car. He turned to show them the sign. They snap this picture.

This picture has gone viral. Thirty-thousand people have shared his post. The Washinton Post did an article on him The New York Times will interview him this weekend. He told me, “I don’t want any fame or fortune. I just want to tell the people that I love them.”

Justin is a deaf Christain man. Married to a man named Roger. He has some kind of machine that was supposed to allow him to hear me. That didn’t work very well. He had a transcriber but I guess I was talking too fast. He asked what he can do to help me in The Christain-Muslim Alliance. I’m thinking about it.

After last week’s post, Bree (my philosphy minor daughter) texted me. Said she needed to talk. Seemed serious. She turned the whole post into a debate into notions of habituation and natural virtue (Aristotle’s ethics) versus deontological (Kantian) ethics.

I’ve got to go, but the question to consider is this. Which is the more virtuous person, the one that is effortlessly (naturally) thankful or the one that doesn’t truly feel thankful (inside), but outwardly makes a practice expressing thankful words?

Bree. What have I created?