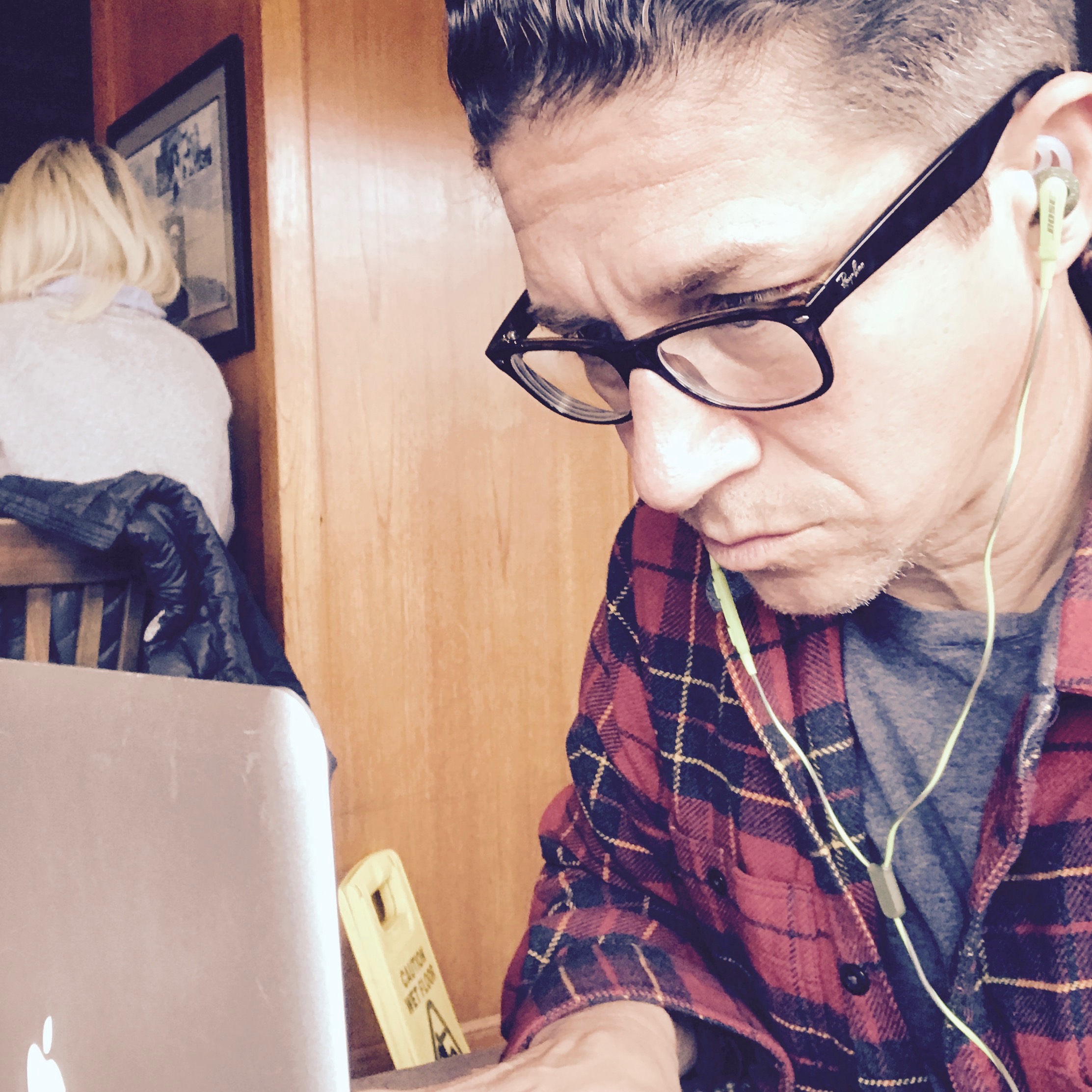 I ran into my friend Sama at Kéan. And she was with her cousin, Rami, and a friend named Angie. Sama is a Muslim and she always wears a hat over her hijab. I met her a few years ago. She is Syrian and used to go there to help people but she can’t anymore.

We talked about Allepo and I don’t know what to write about that right now.

Sama works at the nature center and finds such joy in teaching children about the outdoors and how to start a fire — things like that. She takes them on field trips to places like Joshua Tree.

Our conversation, packed around a small table, the four of us, was beautiful and I don’t know exactly why it was so beautiful.

But I have a hunch.

Because it’s raining and we are talking about things that matter and Kéan is packed because nobody can sit outside. Rain blasting down and it’s tight in here with bodies and voices and warmth  and humanity and there’s something about that feeling.

Some people are accepting and welcoming and you could feel by their body language that they love humanity. Sama and Rami and Angie send those vibes.

I don’t always send those vibes of love off and I’m too aware of my deficiency.

Angie just returned three days ago from Germany. She had studied for and lived there for 10 years.

If you’re not from the USA, you understand this too well.

Traveling is one of the greatest teachers. Humbling.

I’m having a lot of trouble right now of thinking what to write. There’s the black man who just walked in. Not many black people here in Newport Beach.

During the election, I heard lots of people saying we need to “get over” the racism issue and move on.

Easy for a white person living in his white world to say.

Denial of white supremacy being alive and well in the USA.

Kanye: It all looks great 400 years later we’re buying our own chains…

Why do people care about the issues they care about?

I’m giving my life to helping Christians understand and embrace Muslims. Because it’s a life and death issue. And people are more suspicious of Muslims than after 9/11. Hate crime’s up.

Muslims are no different than anyone else. I had dinner with some Muslims this week. A university professor of finance and his wife and two kids, one an engineer who just graduated from college. And a daughter in college. Some others. And an amazing Christian pastor and his amazing wife.

Ten of them. Five of us.

Xenophobia is the fear of that which is perceived to be foreign or strange. Xenophobia can manifest itself in many ways involving the relations and perceptions of an ingroup towards an outgroup, including a fear of losing identity, suspicion of its activities, aggression, and desire to eliminate its presence to secure a presumed purity.

Why do some care about orphans?

Why do some care about human trafficking?

This is a problem. We should all care about all of these issues and not politicize them.

Christian leaders politicize them by picking and choosing what issues to address.

I’m a man. I am white. I am educated. I’m upper middle class. I am Christian

But it frustrates me that the male, white, educated, upper-middle-class, Christians have all the power.

Didn’t Jesus care mostly for those unlike him?

I make no apologies for who I am.

Will you join me? Visit Christian Muslim Alliance and sign up?

I was going to write a post a few weeks ago about holidays – why family dynamics are so difficult. But then during our break at Beer and Carols I was telling a few friends about this post idea, and a lady I had never met who is a divorce lawyer said, “I don’t agree. My family has zero tension during the holidays. I can’t relate because it’s totally peaceful every year in my family.”

So she turned my whole theory upside down. I had never met the lawyer lady before but she seemed very credible. She wasn’t married and didn’t have kids if that matters.

I think the holidays are hard for families, because love.

This is a season of love.

That’s what love does.

Bree tells me that some of her friends read all my posts and enjoy them. College students.

That brings me joy.