No Thanksgiving Food Yet, Hamilton, Why Are Liberals Artists?, Join The Resistance

I’m going to drive with Gina to the desert. And I’m going to then drive to the Salton Sea. Then to this place called Bombay Beach. Maybe you’ve been there before. It’s dirty and dotted with abandoned houses and I think meth houses. It stinks. There are dead tilapia all over the shore. But something about it makes me feel more human than the posh hotels.

When I was young, I don’t remember eating Thanksgiving food before Thanksgiving day. But in the past decade or two, restaurants started serving turkey sandwiches with cranberry sauce. Pumpkin spice lattes. And Trader Joe’s started peddling a variety of cookies and crackers and I can’t remember right now, but a bunch of Thanksgiving items peppered with nutmeg and cinnamon.

People always say Christmas is getting earlier and earlier each year. Stores are selling decorations earlier. Radio stations playing Christmas songs earlier. But I don’t think so. Seems to always happen at around the same time in October.

I don’t believe in opening Christmas gifts early. Some do and that’s okay. But I think the best day to open Christmas presents is on Christmas.

I hear a lot of people bashing liberals lately. I’m a Republican. But I never bash liberals. In actual fact, I like liberals. I often prefer their company. They are generally more creative, more cultured, well read, more global, far more merciful to the poor. Less rigid.

Look at most authors, Most musicians. Artists. Most are liberal. So we read their books and sing their songs and look at their art in the museum in LA or New York or somewhere in Europe as we’re clicking away posting, but we chastise them for being “liberal”?

Liberals have far more empathy for the disadvantaged than the many of the cold “suck it up” types on the right.

I consider myself a liberal Republican sometimes. I think the Republican party needs more liberal conservatives. 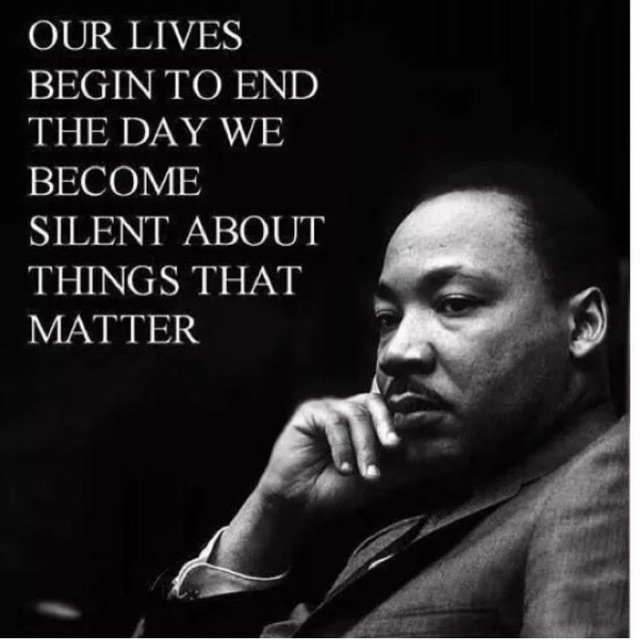 My friend Phyllis put this image on Instagram this week. I liked it. And it made me mad. Somehow, many of my Christian brothers and sisters have mistaken silence with virtue. I heard one pastor ramble on and on about how it’s our calling to lead “quiet and humble” lives. As he’s up on a stage screaming at that flock that they need to be quiet. See the irony? Everyone lead quiet lives except pastors like him.

Glad Jesus didn’t lead a quiet life. Lucky for the poor and the women and the outcasts of society. Lucky someone stood up to the religious leaders that tried to shame everyone.

Remember the “silent majority?” Today there is no silent majority. Only evangelicals that are vocal about issues that they deem important. Like abortion.

But on the issue of racism and xenophobia, mum’s the word.

I am a Christian.

I am a lifelong Republican.

I believe the issue of ending racism and xenophobia should be taken up by Christian Republicans. Traditional values — welcoming and loving and accepting and having compassion. What could be more traditional than that?

Let’s none of us be silent on any of the things that matter. C’mon, let’s do it!

I know it’s so much easier to talk about “all those liberals.”

It’s not Donald Trump I hate. I pray for him, now that he’s a soon to be leader. It was never about Donald Trump. It was about his ideas. His words, which, according to Wittgenstein, are deeds.

(Now I want to try a pumpkin spice latte, but if I do I promise to wait until Thursday.)

If you struggle as a writer, there is no better way to learn to write than to freewrite. It can make writing as easy as talking.