I am afraid. Today, I feel feelings of fear. I don’t want to admit that I am afraid. It is my hope that my fears are paranoia.

Becasue part of me is certain that people, ultimately, are good. We want a roof over our head. Food on the table. Kids safe. Peace to pursue our passions. But this election has shown otherwise. Seen a lack of civility, anger, rage.

I want to hope that regardless of the results, we will all settle back into our lives.

But if Donald Trump wins, I am afraid of what might happen during his administration. I will be afraid the day after he is inaugurated into office. I will fear him starting a war. I will fear him abandoning our allies. I am afraid that many of his followers are war mongers, bullies, the kind of people that think being “tough” means blowing Iranian boats out of the water because they taunted out boats.

I think he will feed off of those followers of his, and do things that could put us all in danger. He becomes mesmerized when people idolize him.

I fear he doesn’t not have the kind of restraint required of a US President.

I remember watching the movie 13 Days, which was a very real depiction of what President Kennedy went through. It was about the Cuban Missile Crisis. We came so close to nuclear war during those 13 days. Khrushchev was a brute. He was taunting us. Kennedy had many on the right that hated him. Thought he was a wimp. They were hawks. Anything less than bombing the sites in Cuba was thought of as weakness.

Kennedy never backed down, but he stayed cool. He wasn’t baited. And we are all alive today.

He will try and discriminate against Muslims. Censoring. Taking away freedom of religion.

He has said he would censor the media.

If Hillary wins tonight, I am also afraid. I’m afraid of what will happen tonight. Not while she is President, because I think she will lead with sound and sober judgment. I’m am afraid that Trump people will go crazy if she wins. I’m afraid he will incite them to violence.

God, I hope that I’m wrong. I hope Trump supporters/Hillary haters don’t take matters into their own hands. People are crazy. I’ve seen them scream “lock her up,” though she’s never been to trial.

Trump has spun this idea of a conspiracy. It’s all rigged. The media. The politicians. The FBI. Everyone other than those who support him? — part of the massive conspiracy to keep him down. If he is ahead in the polls, he cites them. If he is behind, they are part of the rigged media

Millions of his supporters beleive every word he says.

Heard him talking about it last night. Saw some crazies screaming, pumping their fists. Saw one guy alluding to shooting Hillary the other day

I am afraid of what might happen at the voting booths. I’ve seen the hatred against African Americans and Hispanics and Muslims.

Leaders unite. Demagogues and dictators incite anger and leverage that anger to get power and control.

Then I was invited to church — a noon Anglican Eucharist. I wasn’t planning on attending church today.

We recited the Election Day Communion:

“…Guide the people of the United States in the election of officials and representatives; that, by faithful administration and wise laws, the rights of all may be protected…”

“…unite us in bonds of love; and work through our struggle…that all nations and races may serve you in harmony…” 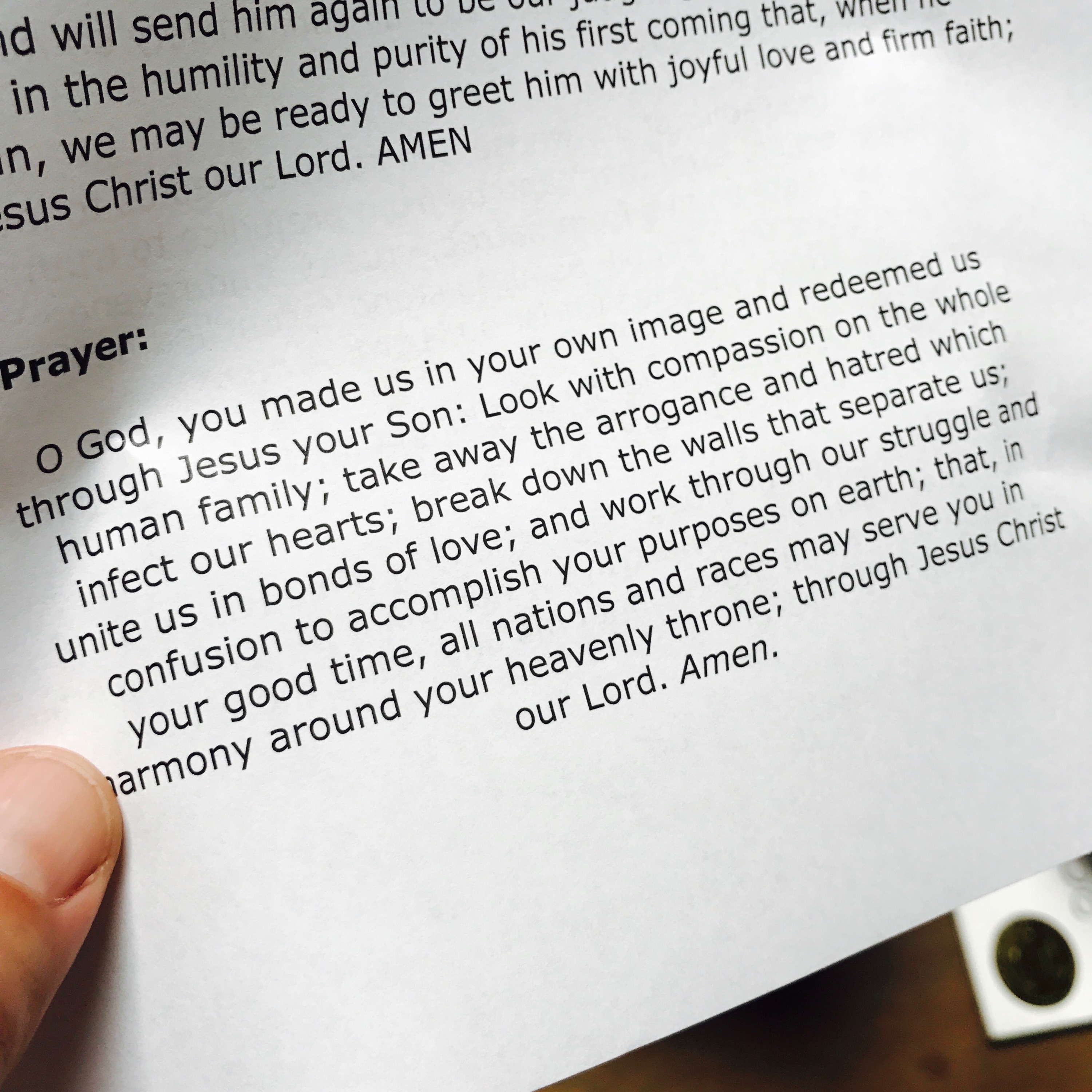