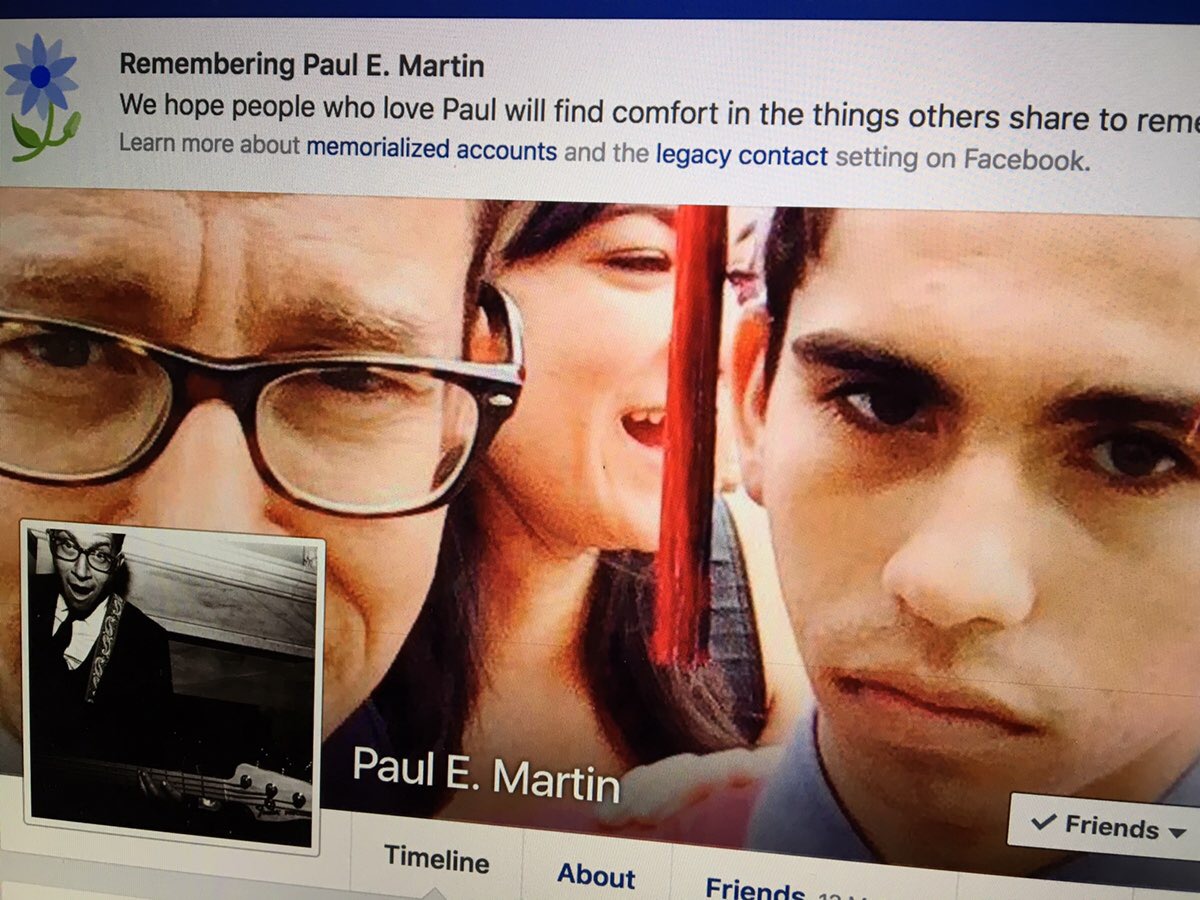 Leonard Cohen died yesterday. I didn’t follow him much as I should have. There is too much talent out there, and only so many hours in a day.

Elliot (one teen) has a sore throat for the second day. I think it could be strep. But he doesn’t want to go to the doctor. How do you make a 15-year-old go to the doctor? His mom is concerned, as moms always are. Dad’s usually not as much. He wants me to go get him a chocolate croissant, so his throat can’t hurt too much.

I went to the beach yesterday. It was almost 90 degrees. November in Southern California. Dry, clear. Played the theme from “The Endless Summer” by The Sandals as we watched the long boarders. Maybe it should be longboarders.

I wonder why pigeons always hang around outdoor restaurants. Are pigeons considered scavengers?

I feel more and more isolated from Republicans. Hard to put my finger on it. I’m a white male protestant Republican, yet I don’t align with so many on the right these days, people in my own party. But some of the people I respect and love most on this planet are Republicans.

Some think I’m an elitist, I imagine. I guess, in certain respects, I might be. In my early 30’s I decided it was totally unacceptable — how little I knew about history, philosophy, literature. It was after living in London. Way more literate in that part of the world.

I became disgusted with my ignorance. I knew how little I knew. Did something about it. So up at 4:00 a.m. and drive to UCLA (before traffic) and drive home at 10:00 p.m. (after traffic). Working a full-time job, too. Three kids.

Years with my nose in a book, having my thinking skills blasted by the sharpest minds. Logic. Lots of logic.

If my education and love of knowledge makes me an elitist, oh well. 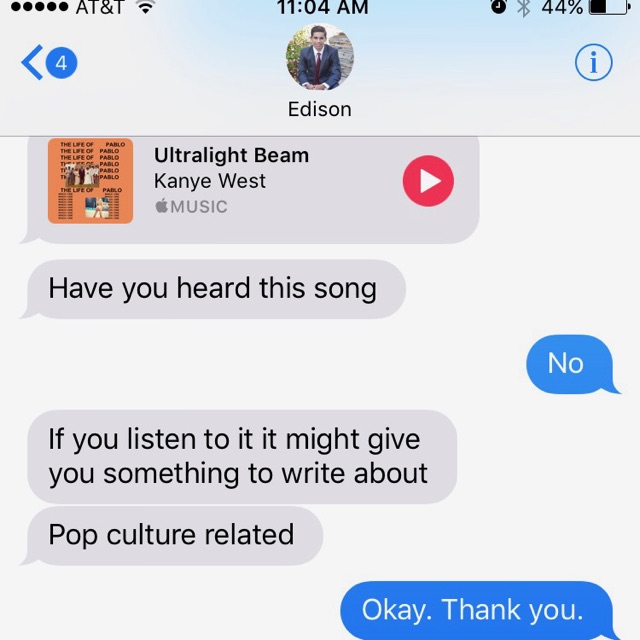 So I took a break from freewriting. And I listened to some Kanye West. Because my New Year’s resolution to understand pop culture.

First, song called Ultralight Beam. Then, he talks about someone named Gina. Of all names:

But damn, Gina, I been this way since Arthur was anteater.

Now they wanna hit me with the woo wap the bam.

Don’t know what it all means. I know what familia means, especially since Dad refers to family as la familia. Every. Time. We. Talk. It’s all about la familia.

And I’m thinking, “Isn’t he married to Beyonce?

I’m still listening. And this lady sang. Or she talked. And there wasn’t much music. More of just her saying stuff about God. Like this:

I won’t always be crying tears in the middle of the night, and I won’t always have to wake up by myself wondering how I’m gonna get through the day.

he’s gonna be there for me. Some day the sky above will open up and he will reach out his hand and guide me through, oh yes he will.

Some day he will. I don’t know if anybody understands what that feels like.

(He guided me through, too.)

All those books I’ve read on parenting. When they are teens the so-called experts say to try to enter their world.

This album hasn’t been that easy for me. I wanted my kids to enter my world. I just entered the Kanye West world.

But I am a Christian. And Ed introduced me to Chance the Rapper earlier this year. And Chance mixed lyrics about smoking bowls with How Great Is Our God. I wanted to call that wrong. “The Apostle Paul told us that whatever is true and whatever is lovely and whatever is excellent and praiseworthy, etc., think about those things.” I was ready to give Ed that lecture, again.

But I listened to Chance earlier this year. I was listening to him late last night

Now Kanye. Whoa, just listening to something with lyrics about “right now.” I won’t tell you what Kanye is talking about.

What does it all mean?

What if Jesus was standing in the middle of a Kanye concert? WWJD?

Some Christian parents would say, “It isn’t edifying.” Remember that one?

More and more, I wonder about the whole idea of edifying.

It’s not edifying to listen to this kind of music? But it is edifying to judge the people that do?

It’s not edifying to listen to music with the word fuck? It is edifying to stay silent when an innocent black man is shot dead on a highway?

Not edifying to vote for a Democrat? It is edifying to slander Christian brothers and sisters who do?

Who do — I love assonances.

Edifying to skimp on your workers’ wages? But edifying to you pad your own life because comfort?

This music upsets me. And something in me is learning from it. 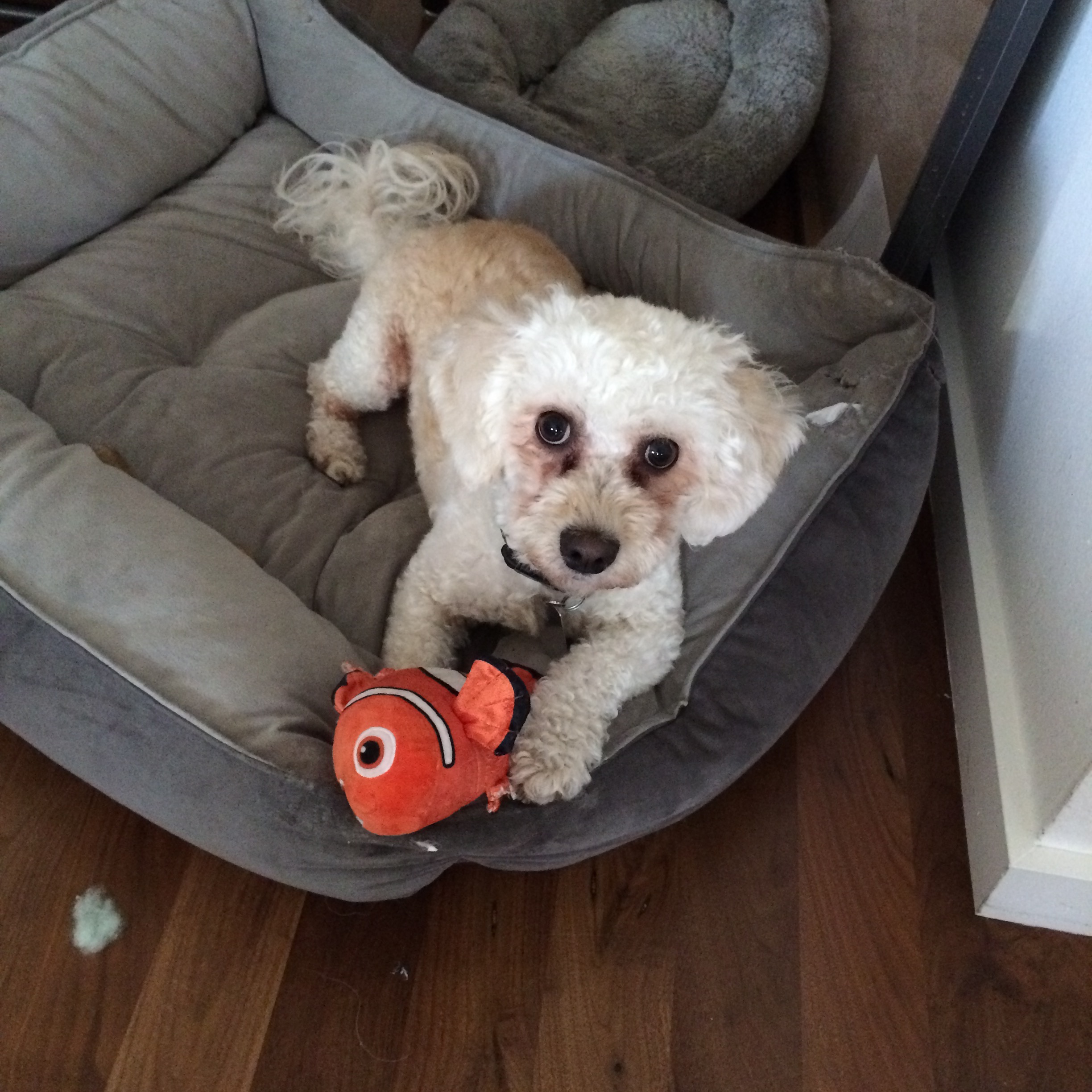 She is my mom’s dog. Half poodle and half Maltese. She’s a pain. But she’s the cutest and most playful dog on the planet. I think of giving her to a dog lover. Putting the ad on Facebook. Dogs are work. In giving her away, I feel I’d be betraying Mom. Even though Mom would never know, wouldn’t remember her, wouldn’t miss her.

Where does loyalty end a codependency begin?

Some older man dressed to an absolute tee just yelled at the waiter because they forgot to put chives on his omelet. “Chives! I told you guys chives!” Then petite, pretty, young Hispanic waitress walked by. “You guys messed up my dish, I TOLD HIM CHIVES!”

Everyone in the restaurant becomes silent. That part of me that wants to stand for justice. “What if I calmly say, ‘Sir, they made a mistake, but there’s no reason to yell at this young lady, she had nothing to do with it.’”

I think the waitress is Latin. Probably Mexican. Respect your elders. Respect is king.

Respect is NOT king. Standing up to abusers is. Too many women are conditioned to let older men abuse them.

My heart is beating. I want to defend her.

Now some busboy runs over and gives him one of those little stainless steel cups filled with chives. And scrooge turns and stomps to his table outside. The patrons all look at each other with that “I can’t believe that asshole” look.

I hope that girl has a father. If not, a mother, aunt, uncle, anyone that will tell her to never take shit like that from anyone. Sometimes you’ve gotta screw respect.

On that note, Donald Trump won.

Winners and losers. That’s how many think today.

It’s clear to me that many of my friends and family and the Trump supporters (which were the minority, since he lost the popular vote) really don’t give a shit about racism. They just glaze over and talk about the establishment or elites or emails. Or, they are fixated on why I wrote shit. Because that’s more important than the Muslim Americans now being harassed.

They are all white.

The issue of race and ethnic and religious diversity — civil rights — I believe, is what was on the ballot on Tuesday.

And you’re lookin’ at the church in the night sky

If you struggle as a writer, there is no better way to learn to write than to freewrite. It can make writing as easy as talking.

« I’m Afraid. I Hope I’m Wrong.» No Thanksgiving Food Yet, Hamilton, Why Are Liberals Artists?, Join The Resistance