How often is your mind occupied with a person? With people? How often are you thinking of a relationship? With your partner? Or ex-partner? Or, the babe you’re pursuing. Your boss? Your child? Your child’s coach?

What percentage of your thoughts would be about people? Twenty percent? Forty? Seventy-five? 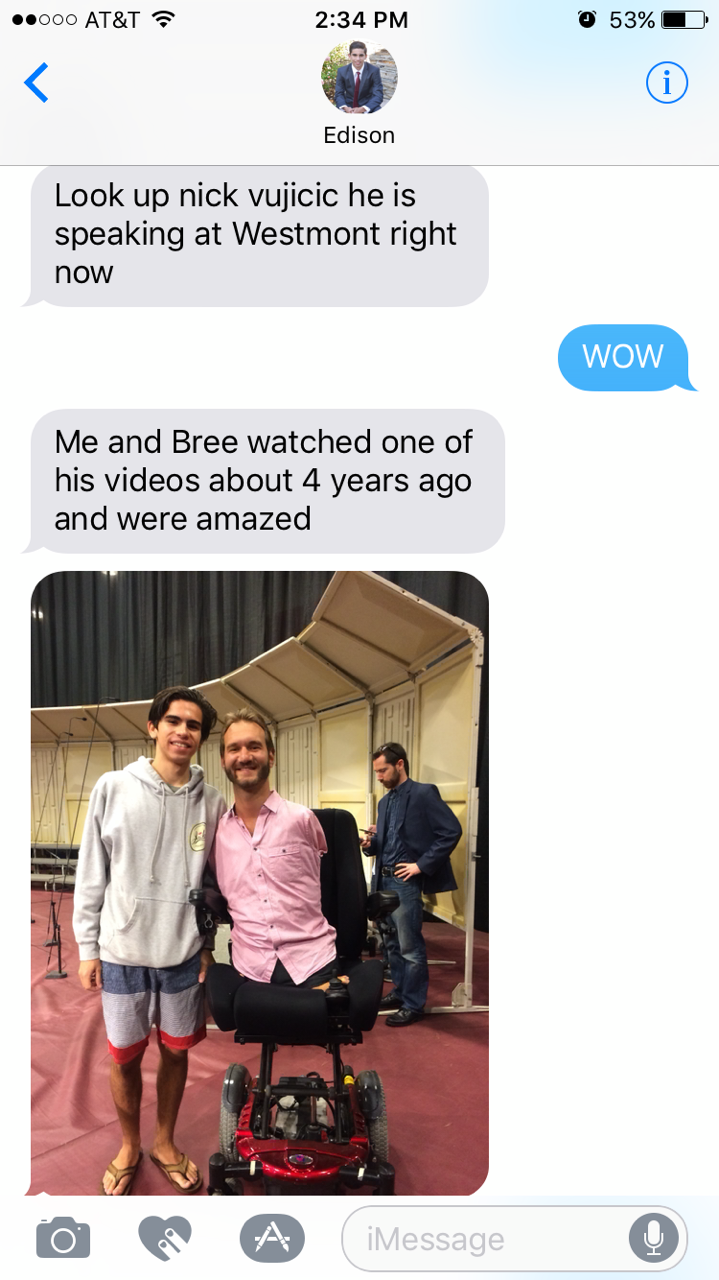 Then the elderly Irish Catholic man just walked up to me. He usually tells a joke. Today he says, “Bach: Most go to their graves with their music still in them. Most men live lives of quiet desperation.”

Vujicic said no to desperation.

Most go to their graves with music still in them because you’ve gotta cram and study and attend top university and intern and get that first job and keep it and network. Climb that ladder.

All so you can buy nice stuff and one day retire. Retire so you can one day do what you want to do.

Climb the ladder to where?

Many have no choice in this. Need to put food on the table. Need to just provide basic food and shelter. I’m not referring to the poor here.

I’m referring to the upper middle class. This class of people has choices. They don’t have to become a tech whatever or accountant or lawyer or salesman. But if that’s their passion, I hope they do.

I had a hamster once. I was 10. A friend gave me one of those tube hamster houses. Remember those things? What were they called? Habatrail? Something like that.

I think I put mice in my hamster house. I think the mice were cheaper than the hamsters. I don’t remember if I mixed the mice with the hamster.

Life can seem like a hamster wheel. The rat race.

Sometimes I sit back and observe everybody driving their cars. And getting their coffee. And driving again. On the phone. Emailing. Meetings.

I wonder about the meaning of it all.

Some things we do for meaning.

Some things we do for money.

I don’t know if the pursuit of money/material possessions can ever bring meaning to your life. (I read years ago that you should never use a slash. I’m not sure what the current standard on using a slash is. But I’m fairly sure it’s incorrect grammar to end a sentence with an auxiliary verb.)

When I was 22, I was a commercial real estate broker. I was going to make millions in real estate. Retire when I’m 30. Like Dad. I sold an industrial building. My commission was close to $40,000. Remember cashing the check. Remember hoping the young hot bank teller was impressed. Forty K was lots of money back then. Still is now.

I drove to South Coast Plaza. I don’t’ remember which department store. Might have been Nordstrom. Georgio Armani. He was a big deal back then. Dropped a few thousand on Armani shirts and pants and I think I bought a pair of black loafers. I think they were Ferragamos.

The sales guy tried to sell me some other “in” designers. Don’t remember their names. I said no.

I only wanted Armani.

But he coaxed me into this fancy long sleeved shirt. It was shiny and had swirls of blue and purple and these sporadic tiny white lines. I don’t’ remember the designer. Might have been Japanese. Shirt cost around $250. Salesman said it was the best thing out there.

Every time I wore it I wondered why I didn’t stick with Armani. I never liked that shirt. Sometimes it’s hard to say no to people that are selling you hard.

But I don’t know how many parents want to create curious and interesting children.

By the time they become teenagers, they know all about GPA’s and ACT’s and extra-cirriculars.

If the kids only knew the universes that exist in those history books. The history books that will soon be reduced to that stack of flash cards. The cards ingested for that test. Then you throw them away. Memorize a fact. Then don’t need it anymore. Then you forget about the Ottoman Empire and Buddhism and Thomas Payne and Aristotle and Louis XIV and Caesar Chavez for a few decades, until you are now 40 and boring and wanting to appear more interesting.

Money is boring. All those classes: literature and art and math and science. All the life changing subjects, where, as one Tiger Mom told me, they don’t need to remember it, they only need to get a 92.5% on every assignment, quiz, test. That means an A. Not an A minus. And that means an unweighted 4.0.

Jack Chick died. He created these filthy tiny booklets. We called them “tracks.” I’m not sure if it should be tracks or tracts. Fifteen years old. I “got saved.” Those little tracts were everywhere. Cartoons. Propaganda. Spewing dualism. Them and us. Bad guys versus good guys. Us that were “saved” versus those heathens on their way to hell. Chick’s main target: Roman Catholics. I gave the filthy tiny tracts or tracks to my Roman Catholic grandmother and cousins and aunts.

Fifteen years old and I had just reduced thousands of years of Judeo-Christian theology to a piece of shit track, or tract

I don’t want to write about Jack Chick anymore.

Just read that two-thirds of those who follow politicians on Twitter follow ONLY those who share their views. And Facebook records the kinds of articles you read, then keeps feeding the same kinds in your feed. So if you’re one of those conspiracy theory types certain of this rigged election, guess what? You’re going to keep getting links from conspiracy theory websites.

If you are a left wing Birkenstock bohemian progressive anti-establishment pacifist Bernie supporter — you’re getting granola.

How do you avoid selection bias?

Wait. Why would anyone want to avoid selection bias? Why would you want to read what the other side has to say?

Because Gandhi. I think it was Gandhi. It’s easier to hate your opponents, than to understand them.

The Christian Muslim Alliance exists to do just that. Let’s all understand others.

Let’s all understand our opponents. Better, let’s become their friends.

On Twitter, if you’re a Republican, follow Elizabeth Warren or Bernie Saunders or the NAACP. If you’re a Democrat follow Fox News or Sean Hannity or Paul Ryan or the NRA.

We all want to have our views affirmed versus having them challenged.

But be sure to avoid the conspiracy theory sites. Because you can find ones that will tell you that 9/11 was a hoax created by the US government. And that the election is rigged.

I have a meeting in 15 minutes for the CMA. And I am sitting on the couch, at Kéan. And there are a few chairs around the couch. And this older lady walks in, puts her purse down. Right next to me. Gets in line. Orders coffee. Comes back. Doesn’t seem happy. Grumbles, “You don’t mind if I sit next to you?” I am expecting three more people. Should I say anything to her? I smile back. Calmly, “I’m expecting a few people in 15 minutes, but please sit here. We can still meet. No problem!”

Her: “I didn’t know saving seats was allowed. Well, I’ll just leave when they get here.”

Her: “I said I will leave when they get here.”

And she turns her head away from me. She opens her Tupperware and starts eating her sliced apples with a plastic knife.

And there’s that part of me that feels the need to keep trying to make her happy. Let her know we really won’t bother her. Let her know this couch and the leather chairs around it are community seating.

Fifteen minutes later. Colleagues show up. She stands up. Looks me in they eye. “I guess I’ll leave now.”

Why do I care? Why do I keep thinking about her?

Because, I think about people more than I think of non-people.

I started “freewriting” in the early 1990’s because I had read this short article called “Freewriting.” I was a horrible writer back then, with the most severe writers’ block. The article said you have to write WITHOUT STOPPING. For a fixed period of time. Even if you have to write the same word over and over again. Over time, you get better, and more confident; writing becomes as easy as talking.

If you struggle as a writer, there is no better way to learn to write than to freewrite. But you have to be a reader, too. It all makes writing as easy to you as talking.

« The Paradox About Being Human» Friday Freewriting: Your Republican Or Democrat Church, Becoming “Cool,” Parental Toughness Or Empathy?