Why I Almost Never Launched This Blog, Fear, Courage, And My “In The Meantime” Theory.

September 19, 2016 By paulosophia in Uncategorized Tags: my life

One year ago today, I launched my blog, Paulosophia.

I wanted to celebrate its birthday by jotting some things I’ve learned about fear, creativity, and pursuing dreams.

I wanted to also confess that one year ago, I was perfectly positive that I didn’t really know what in the hell I was doing. And I still don’t today. My blog doesn’t really even have a theme! I probably should come up with one at some point. I don’t know how to use the SEO features. I messed up the widget that lets you post comments from Facebook. And even though I like the juxtaposition of my first name in Italian, Paulo, and the Greek word for wisdom, Sophia, people always pronounce Paulosophia wrong (it’s supposed to have the same meter as Wikipedia).

A few have told me it’s not a very good name. I think they might be right.

But that’s the thing with creativity. It’s never quite right. And unless you have the courage to share the stuff you make, publically, you will never be sure if anyone will like it, or hate it, or even give a rip.

I had thought about launching Paulosophia for years. When I finally launched it, it was because I finally decided to implement the Paul E. Martin “In The Meantime” theory. My In The Meantime theory goes like this: While you are figuring out whether or not you want to pursue something (i.e., while you’re stuck thinking about it), you start it (i.e., actually doing it). Soon enough, a month goes by. Then two. Then years.

Dreaming is like someone who talks all the time about wanting to become a baker. They read all the fancy baking books. They watch the baking shows. They create the most amazing Powerpoint presentation. They talk about baking. But they never put anything in the oven.

.
I’ve coached a few young adults in my life. Many weren’t sure about goals. They were on the fence about whether they should continue in a sport, or whether they should stay in school. Many of them thanked me years later because they were killing themselves with all this endless black and white speculation. Should I shouldn’t I?

I heard not too long ago that a lack of decisiveness is actually a symptom of depression.

But in using the In The Meantime theory, these young people were able to take the small vital small steps always necessary to moving forward. They enrolled in just one class. Then add a few ticks of the clock. A second class. And a few more. Then it’s graduation day.

I used the theory when I decided to attend UCLA. I was in my thirties. I had children. It wasn’t the right time. Usually, it’s never the right time to begin pursuing our dreams. But by the time I was 42, I had a master’s degree. Glad I didn’t keep thinking I was too old.

A huge added benefit in writing this blog is that I don’t really know what I think about anything until I’ve put it in writing, and shared it with others.

But the posts are out there—and while I’m figuring out how to write better, or write with greater clarity, or develop better examples, I’m writing.

In the meantime, I’m getting it done.

A few months ago, a found a book called Big Magic by a lady named Elizabeth Gilbert. I found it on Gina’s coffee table. Don’t know why I decided to give it a glance. But I did. I read 15 pages. I want to read more. But I rarely finish books. I prefer starting them.

Gilbert lists some reasons why people postpone writing or singing or sculpting or acting or business.

Here are her reasons in italics. Below them are all the good reasons I should not have launched Paulosophia:

You’re afraid you have no talent.

You’re afraid you’ll be rejected or criticized or ridiculed or misunderstood or—worse of all—ignored.

I’m not afraid of being rejected or critiqued or ridiculed or misunderstood. But, yes, being ignored would have sucked. Didn’t happen. Correction, some have ignored, but others have not. And I’ve lost a few “friends” along the way. That hurts. But it’s also what happens when you decide to take a stand on things, and be honest.

You’re afraid there’s no market for your creativity, and therefore no point in pursuing it.

Funny. I was told that I was launching a blog at the very worse time in the history of blogging. People don’t really visit blogs much anymore; they read Facebook instead. So, no, I knew I wouldn’t be making money off of Paulosophia, at least not in the immediate future.

You’re afraid somebody else already did it better.

You’re afraid everybody else already did it better.

You’re afraid somebody will steal your ideas, so it’s safer to keep them hidden forever in the dark.

Yes. Especially in academia. Especially amongst proper philosophers and professional journalist. But, then, my vision was always to write using accessible and conversational English. So I’m sure some professional thinkers might think my blog is crap, but it’s not for them, anyway. It’s for the 90% of the population that doesn’t get paid to think for a living.

Nah. Presenting ideas or art of any kind always changes people’s lives, at least to some degree.

You’re afraid your dreams are embarrassing.

No. I’ve learned that people think it’s cool that I write. That was never my goal: to be cool. But many people seem to like me more than they did before.

You’re afraid someday you’ll look back on your creative endeavors as having been a giant waste of time, effort, and money.

No. But I was afraid that many men would think this of me. Because in today’s culture, the life of making money is king. You get respect to the degree you work in tech or business or law or owning a business or being an engineer, etc. So, yeah, I knew lots of men—especially the ones who have stifled their creativity with their quest for monetary success—would think Paulosophia was stupid. Sure many still do. But women are different. Don’t know why. Not being sexist here, but it seems that women are far more accepting of the life of creativity, the arts, self-expression, than men. Lots to say here but that’s how it feels to me.

You’re afraid you don’t have the right and of discipline.

Knew I didn’t have the right kind of discipline. Still don’t. Goal was to post new material twice a week, every week. Fell way short. Even as I type this sentence, I’m too aware of how hard pursuing your dreams can be. Writing is hard. But in spite of my wrong kind of discipline, I’m doing it.

You’re afraid you don’t have the right kind of work space, or financial freedom, or empty hours in which to focus on invention or expiration.

Nah. And when my computer was lost, I used pen and paper. As a result of that mishap, I now post weekly in handwriting.

You’re afraid you don’t have the right kind of training or degree.

Nope. Thanks to the In The Meantime theory.

You’re afraid you’re too fat. (I don’t know what this has to do with creativity, exactly, but experience has taught me that most of us are afraid we’re too fat, so let’s just put that on the anxiety list, for good measure.)

No. Was in good shape.

You’re afraid of being exposed as a hack, or a fool, or a dilettante, or a narcissist.

Nah—we are all, to some degree, hacks and fools and probably dilettantes (but I don’t know that that means) and narcissists (even though that word is so trendy today and way overused).

You’re afraid of what your peers and coworkers will say if you express your personal truth aloud.

YES. This one was big. Especially because I made it my goal to actually write what I was thinking. To be honest and transparent and vulnerable. If my goal was to post about how beautiful life is and how everything is good and nice and love and peace and I love you and we just need to pray and keep having hope and trust and love and peace and it’s all positive and it’s all good, man, with waterfalls and motivational quotes—then I knew everyone would like my personal truth being expressed aloud. Or, at least they would never have to think deeply, or be offended.

But I wrote what I actually thought, and people don’t always like that. But many have. And they tell me, often. (I have to say that, in retrospect, I think I could have been far more honest.)

Not sure what that means, exactly. So, nah.

You’re afraid your best work is behind you.

I had never writing for a public audience, so, no.

You’re afraid you never had any best work to begin with.

I knew I would discover more about my work as I made is public.

You’re afraid you neglected your creativity for son long that now you can never get it back.

You’re afraid because something went well in your life once, so obviously nothing can over go well again.

You’re afraid because nothing has ever gone well in your life, so why bother?

You’re afraid of being a one hit wonder.

You’re afraid of being a no-hit wonder.

She ends the chapter with, “Everything is so goddamn scary.” And I still feel that fear from time to time, especially to the degree that I’m writing my true and honest thoughts on controversial subjects.

But I’m glad I dove in. I plan on keeping it going.

While I’m figuring it all out, in the meantime. 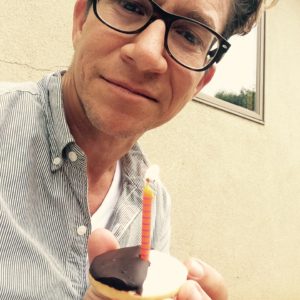 « Friday Freewriting Of Everything That Came To Mind. (Almost)» A Big Silence Coming To A Church Near You.