What Do Tough Republicans Think? Or, do they?

So you have Republicans like Mitt Romney or George H. W. Bush or Marco Rubio.

Tough Republicans are, well, “tough.” They want to “bomb those fucking terrorist countries” and “kick the shit out of ISIS.” They are big on a strong police force — we need to manhandle all those thugs and put ’em in their place.

Tough Republicans like to say “God bless America.” They are loyal to the Pledge of Allegiance. And the USA is One Nation Under God. Many of the Tough Republicans I’ve known over the years like to mock “queers” or “pussies” or “sissies” — men who don’t quite measure up.

Some Tough Republicans even drive big trucks. Some with large American flags. And bumper stickers. God bless our troops. NRA. This kind of thing. 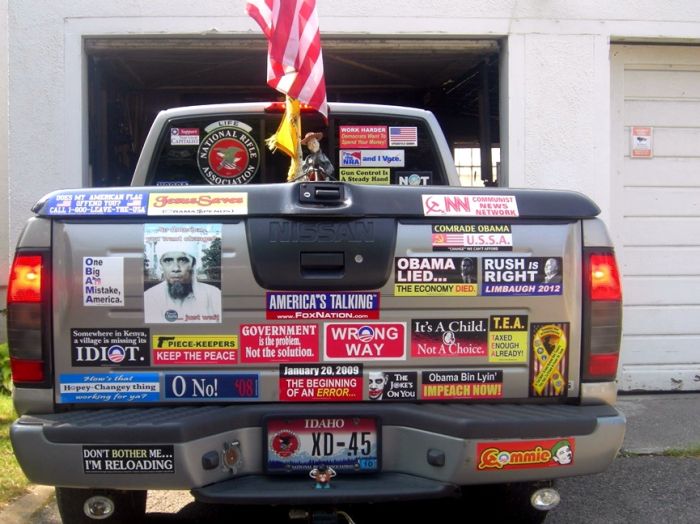 Tough Republicans don’t like whiners, either. Got a problem? Suck it up. Quit bitching. Life’s tough. Get over it.

Tough Republicans tend to think in black and white. They don’t like complexity. There are simple solutions to our nation’s problems.

Too many Mexicans? Build a wall.

Tough Republicans are usually white, and they tend not to relish the society of people of color. And they don’t like “Obama.”

Most of all, for Tough Republicans, the problem is always Democrats.

So Donald Trump became the perfect choice for the tens of millions of Tough Republicans. Trump tells it like it is. He doesn’t’ have time for bullshit. He’s willing to say whatever needs to be said. He ain’t politically correct.

Most of all, he’s going to make America strong again and protect those brave ones who have fought for our freedom.

Because Tough Republicans love people in uniform. Especially when they have guns.

Donald Trump thinks our weak and cowardly former presidents have mistreated our veterans. He’s made that clear. Trump says, as president, he’s going to stand up for these heroes: “We wouldn’t have even been here if it weren’t for our vets, and our vets are being mistreated.”

Senator John McCain is a regular Republican. He’s like George H. W. Bush or Mitt Romney or Marco Rubio. These politicians certainly disagree with the liberal agenda. Their careers are made of attempts to reduce the size of the federal government. They are big on a strong national defense. They advocate for traditional values. But regular Republicans don’t see Democrats as the enemy. Regular Republicans are a bit more chill.

Regular Republicans might disagree with you, but they won’t hate you for your beliefs.

This is Donald Trump talking about a regular Republican — John McCain. Senator McCain endured over five years of intense torture after his plane was shot down on October 26, 1967. He was beaten and burned and emotionally tormented because of his stature and his father’s senior standing in the Navy. You can read of his horrific torture here.

Here’s Trump on an American hero.

“He’s a war hero because he was captured.”

Trump used deferments to stay out of the military.

I wonder what is in the minds of Tough Republicans when they watch Donald Trump mocking one of America’s most brave and courageous war heroes.

I sometimes wonder if Tough Republicans even know how to think.

« After Alton and Philando And Dallas…» Up For Debate: Talking Politics With Kristen Howerton (Episode 18)