You’re dead serious about your Christian faith. It means everything to you. You call yourself a Christian. Proudly. But not just a Christian, an Evangelical Christian.

You believe, wholeheartedly, in conservative moral values. Modesty. Sex only within marriage. Marriage only between one man and one woman. You believe that sex outside of marriage constitutes the sin of fornication.

And same-sex marriage, the sin of homosexuality.

As an Evangelical, you don’t merely make up your morality; you get it from the Bible, which you believe to be God’s Word. And you hold that the Bible is true and without error. Infallible. The Bible says it, I believe it, that settles it, is one of your famous mantras.

Traditional and conservative moral values, you believe, matter more than anything else.

You kinda view life in black and white.

(As an aside, you love C.S. Lewis, but not when he said this: “The world does not consist of 100 per cent Christians and 100 per cent non-Christians. There are people [a great many of them] who are slowly ceasing to be Christians but who still call themselves by that name: some of them are clergymen. There are other people who are slowly becoming Christians though they do not yet call themselves so. There are people who do not accept the full Christian doctrine about Christ but who are so strongly attracted by Him that they are His in a much deeper sense than they themselves understand.”)

As an Evangelical Christian, you see sinners and liberals and people of this world pro-choicers and Democrats and non-Christians and Muslims, too, as a threat. Especially, if you’re a parent. You don’t want bad people or bad things influencing you, nor those you love.

You want to protect yourself.

You want to protect your kids.

And you want to protect your country.

So you fight to keep sinners and liberals and people of this world and pro-choicers and Democrats and non-Christians and Muslims, too, from influencing the country you love. Because you believe that Evangelical Christians founded The United States of America.

Your great nation was founded on Christian principles, a city shining on a hill, in God We Trust, One Nation Under God.

“Things are getting so crazy!”

And, oh, all those homosexuals! — all those carnal LGBT people: lesbians and transsexuals and gay men and transvestites.

“THEY want to use OUR bathrooms!”

So in your heartfelt vision to protect yourself, your children, and your nation, you support conservative politicians—leaders that will stand-up to all those liberals, leaders who will elect judges to reverse Roe versus Wade, leaders who will keep men out of women’s restrooms.

So to protect yourself and your children and your nation, you vote for Republicans.

Because Republicans support conservative and traditional and moral values.

And the beliefs and morals of those that LGBT community, and the freedoms they want to impose on our nation, are not conservative, nor traditional, nor Christian.

Donald Trump is a Republican. Hillary Clinton is a Democrat.

So you support Trump. Becasue Republicans will fight for you and your conservative and traditioanl values. Hillary is a liberal. She won’t.

And your candidate said this on Tuesday: “Ask yourself, who is really the friend of women and the LGBT community. Donald Trump with his actions, or Hillary Clinton with her words?”

And he tweeted this. 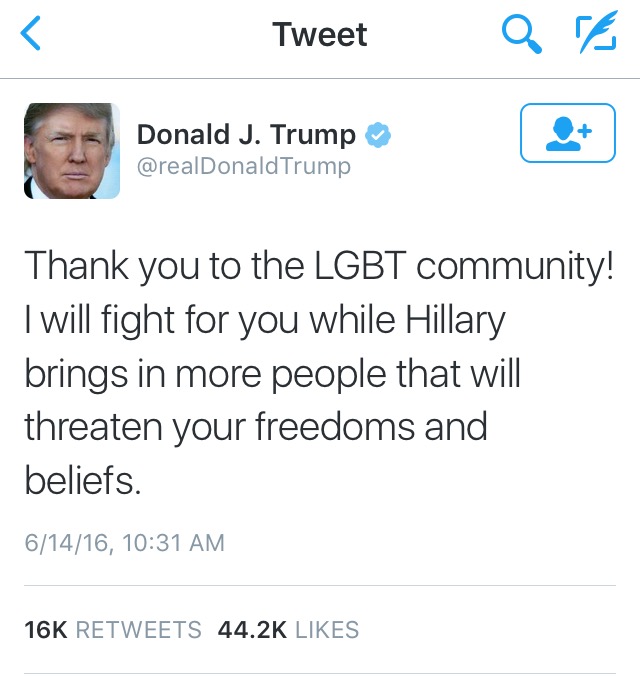 Donald Trump said he will fight for the beliefs and rights of  LGBT liberal Americans MORE than Hillary will.

« Up for Debate: Talking Politics with Kristen Howerton (Ep. 15: Orlando)» It’s A Wrap