It’s summer. Your teenager is 15. He wants to go to a friend’s house.

But you don’t know the friend.

You don’t know the parent. Nor the uncle. Never met them. 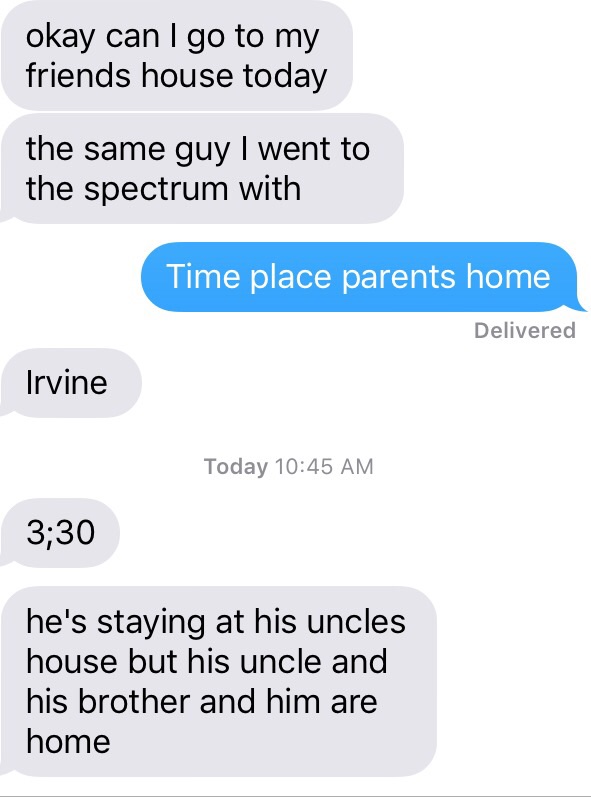 So what do you do? I’ll get to that. But one thing for sure — it’s much easier when they’re young.

Because when you kids are five or 8 or 10, the law requires parental supervision; at least one parents is always at home.

And when kids are younger, chances are that their elementary or middle school is relatively small. And they’ve probably played on local sports team or dance teams or whatever local community activity. So you’ve already met a ton of parents. You’ve spoken with them. You’ve shared stores. You’re able to weed out that bad kids because you know the parents.

On top of that, your kids are fine with you calling their friends’ parents. It’s the norm. So playdates feel safe because you get to verify everything: the adult supervision, what the plan is, drop of time, pick up time, etc. And if you’ve never met the parent, it’s still acceptable to  just get their number and call. And if they seems sketchy on the phone, it’s easy: you come up with some sudden excuse why your kid can’t go today. You lie to the parent through a text about having to run to the doctor or your spouse needing you or car trouble or whatever.

But then they go to high school. And in high school, the middle school of a few hundred is replaced by a high school of a few thousand. And the kids come from further distances. Now know each kid and parent is harder to know, or even meet. It’s a numbers game: you’re just not going to know all the kids.

Then they send you a text and want to hang out.

But your kid ain’t going to let you call the parent. He’s almost 16. There’s no way in hell he’s going to text his friend: “My dad needs to talk to your mom or dad…can I get their number and my dad (i.e. daddy) will call them and make sure it’s okay.  Not gonna happen.

And, here’s an aside. The system for socializing kids is tilted against single dads. We don’t have the luxury of being part of the mommy social network. When it comes to raising kids, school, school activities, parent networking, and activities, it’s a mom’s world. Single dads aren’t in the know because we aren’t part of the mom social network. And when you try to break-in to that group — trust me on this one — the moms don’t quite seem to capture your motives.

First, write a short post about it to get it off your chest.

Second, take a deep breath and look at the big picture.

Specically, that it’s a very safe world out there. Especially in Irvine, Calfiornia–regularly voted one of the safest cities in the US.

My ultimate view is that there’s far too much anxiety out there today. Everyone is focused on what can go wrong, even though crimes and homicides are lower than they’ve been in decades. Kids are safer than they’ve ever been. And in most countries and for most of history teenagers have had their own families are the men were fighting in wars.

Today, we’re paranoid. All of us. Too many evils. Most which are perpetuated by sensationalism peddled to us by the idiot news reports. That crap sells advertizing, so we keep hearing about it.

I block that crap out.

Because I don’t want to infantilize my teenager, even against the cultural pressure to do so. Much of the pressure comes from the Evangelical Christian community I’ve been a part of.

I think kids should grow-up before they turn 18.

Even mine, even yours.

« It’s A Wrap» Up For Debate: The Curious Marriage Between The Republican Party And Evangelicals (Ep. 16)