(I had these thoughts today following my conversation last night with my friend, Kristen.)

Some things are true.

Like facts.: Abraham Lincoln was the 16th president of the United States of America.

And logical truths: If Paul is a man, and all men are human, then Paul is human.

And mathematical truths: The sum of the interior angles of a triangle is 180 degrees.

And analytic truths: All bachelors are unmarried men.

And truths about our memory: Yesterday I took Elliot to try on a suit.

And scientific truths: Water boils at a temperature of 212° F at 1 atmosphere of pressure.

Oh, and being male or female is a matter of fact: Males and females (not intersex) have distinct biological characteristics. A penis or vagina and XX or XY chromosomes.

Today, some view gender as being outside of the realm of facts.

Gender is being defined today by how one feels.

So, if I feel like I’m a female, if I identify more with “feminine” characteristics,  I’m a female.

Because how I feel, in today’s popular epistemology, determines truth. Not what’s a fact, not that which is true, but how I feel.

But I’m not. Expressing your honest thoughts is not the same things as hating. And, in my case, I want to learn, be enlightened, and, certainly be open to opposing views.

And as Kristen and I talked last night, you could see my walls crumbling, my old fashioned proclivities, evaporating. She makes a hell of a lot of sense.

One of her points is that many states have already be allowing transgender students to use the non-biological orientation.. I mean, biological males that identify as non-biological females who want…this really is very difficult to write because I feel like I need to use lots of prefixes and I’m afraid of saying it all wrong and upset someone…

Some males feel like females so they want to use the bathrooms that have a sign on the door that says “Women.” And the schools have been letting ’em.

I heard on NPR this week that that’s been happening in some states like California, for years. And nobody’s heard of horror stories. Because there are none.

The system is already working fine.

And, the whole hysteria of boys disguising as girls so they could look at their boobs is ridiculous. That’s just not the way this thing is going to shake out. Because most students don’t even know who the transgender females are. They’ve looked like females for a long time.

By the end our our chat last night, Kristen had pretty much changed my mind. She basically said, “Just because science says this and logic says that doesn’t mean that these people shouldn’t have the right to feel comfortable.”

I can’t disagree with that.

It’s just when their freedoms make others uncomfortable — that’s the topic here. I’m leery to use the example of second hand smoke. Sorry if this offends. No metaphor intended. But remember the argument of the majority? The smokers, a minority, felt they should have the freedom, the right, to express smoke in public places. It’s a free country and all that. Problem was that the vast majority of non-smokers didn’t think it was fair; their own rights to breath air without cigarette smoke were being infringed upon.

In a democracy, the majority won. The smoke bothered the non-smokers. So you can’t smoke in public places in many states, or in airplanes, anymore.

Is it okay that some parents, millions of them, don’t want students with… XY chromosomes… in the bathroom with their young daughters?

In this case with bathrooms, the majority doesn’t seem to be ruling. The minority is. The tail seems to be wagging the dog this time. I think it’s fair to say (I’m guessing here) that parents of minor children, overwhelmingly, by the tens of millions, don’t want (biological) males hanging out in their daughters’ bathrooms or locker rooms.

But President Obama said last week, “too bad.” If the schools don’t comply with this order by the Executive Branch of the federal government, fine. But you lose your federal funding.

President Obama, effectively, will close your school down.

I know this photo that I lifted from Instagram oversimplifies the issue. 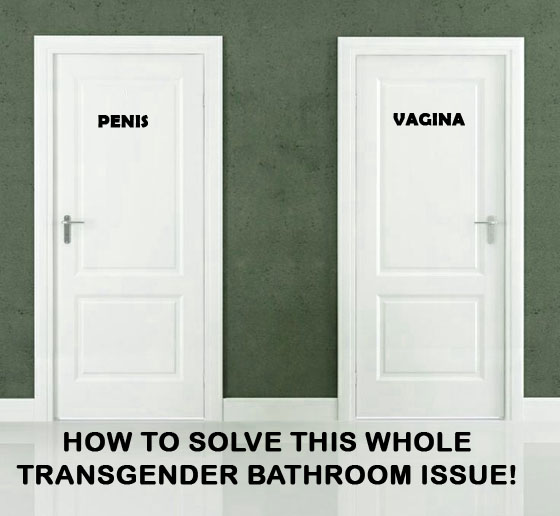 But  it would make this whole thing easier!

Because times are changing. What worked 50 years ago won’t work today.

And last thought. It’s the slippery slope argument. What happens when the new minority group wants to change a law? — a group feels it needs its own bathroom? Actually, is already happening in universities. So the government must force schools to provide three bathrooms. Gotta be certain we are not offending the rights of the next minority group that feels offended by current conventions.

Someone is always going to feel left out. And there’s no way government can fix it.

« Up For Debate: Kristen and I Disagree About The Transgender Issue (Episode 12)» It’s A Wrap