April 4, 2016 By paulosophia in Uncategorized Tags: my life

We’ve returned from a family vacation to Mammoth. And here are a few of the things I thought.

I used to make lists for family trips. Gloves, pants, goggles, enough socks, shampoo, snacks, chap stick, etc. I’ve now realized that making the list and then finding every single thing ahead of time is more stressful than just gathering as much stuff as you can then figuring it out when you get up there. It always works out.

Airbnb is pretty awesome, even though I think it should be pronounced “air-b-and-b.”

Okay. Those random towns that you have to drive through. Seriously. Do you ever drive yourself insane wondering why people live there? In places like Olancha? 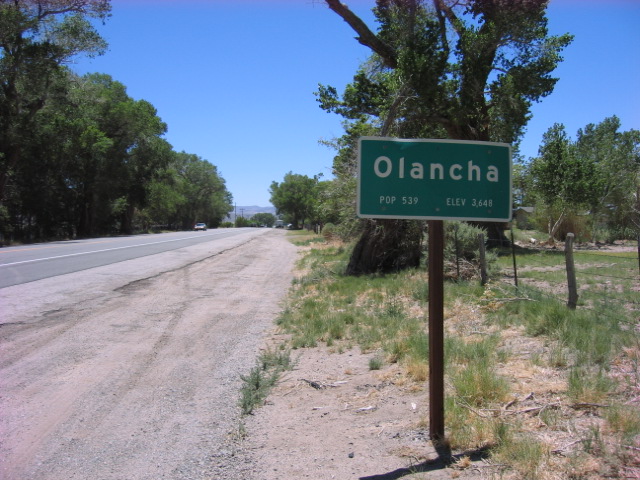 And what about those town signs than always have the most random number for the population. Olancha said 539 people live there. Those numbers can’t ever be right. But I guess the numbers in larger cities like Los Angeles can’t be, either.

What if you’re a kid living in Cartago (population 92). No school there. Where do the kids (or the kid) go to school?

My theory is that kids do grow up in places like Cartago. When they’re young children they know no difference. But, eventually, they realize it’s no place to live. So they try to move to a big city but it’s too expensive and they don’t have the skills to make it. So they move back. Then they have their own kids and it repeats itself for generations. I have no proof of this but it’s my theory.

On the way home, driving through Inyokern (population 1,099) I saw a dad and his teenage son outside fixing a barbed wire fence. There was nothing out there but the fence and sandy dirt and tumbleweeds. And the kid was just watching the dad. I felt sad for the kid even though he might have been perfectly happy helping pop. I think these parents must be paranoid of the larger cities, which is why they keep their kids there.

What’s with all the towns having 9s in their purported populations (539, 92, 1,099)? I think it’s because 9 is the largest of the numerals and the people trying to promote the town want it to seem more populated than it actually is.

This one house in Randsburg had a Joshua Tree right in front of it. Joshua Trees intrigue me. Partially because they remind me of the trees I’d see in cartoons growing up. But this Joshua Tree looks like someone pruned it. It was bushy. It lacked the random branches pointing up and down and right and left. Give me 100 perfectly cartoonesque Joshua Trees in my front yard. I ain’t living in Randsburg.

Gus’ Beef Jerky. All those random billboards. Couldn’t Gus have thought of a better tagline than “Really Good Fresh Jerky”? Reminds me of the city of Fountain Valley’s slogan: “A Nice Place To Live.” And, could beef jerky be fresh anyway? 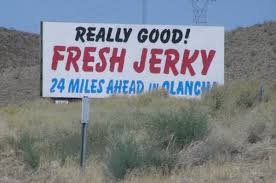 Schools in my neck of the wood have a week off every year called “Ski Week.” I wonder how many of the families actually take their kids skiing? And I wonder if the snowboard people are going to lobby to get it changed to “ski and snowboard week.”

The cost of skiing/snowboarding.

Ice cold Chardonnay tastes better after a good day of skiing for some reason.

When I was a kid no one had invented snowboarding yet. Why did it take decades to invent snowboarding even though surfing and skateboarding were massively popular?

The feeling of getting on the lift (finally) and the quiet sound of the wind in the trees and taking your first run down the hill (finally) is just pure exhilarating. But is it exhilarating because it’s that peaceful or fun or because of all the work and money you just spent?

Finally, getting back to work following a family vacation feels like a vacation. I wonder what’s more stressful, vacations or working.