Should You Tell Your Kids Who You’re Voting For?

I wanted them to think for themselves.

Most parents are afraid of letting their kids think for themselves because they might end up having different views.

And, for many, different views are scary.

“Nope, if I tell you who I’m voting for you’ll just believe what I believe.”

“That’s what happens. Parents just indoctrinate their kids with their own beliefs as if they are fact, and the kids just blindly follow their parents ideology.”

“Dad, what is ideology?”

“It’s just a way, a theory, the way you think about something.”

“Then what’s YOUR ideology?”

“My ideology is to understand the issues, to research the history of each candidate, and not to make elections about good people versus bad people.”

Here’s the deal, parents. You need to teach your kids to be free thinkers, not parrots. Tell them who you’re voting for, they’re going to repeat whatever you say.

“Daddy, all my friends’ parents are voting for John Kerry.”

“Are you voting for Obama?

That was Bree. She attended an charter school. A public school. A school comprised of art conservatories. Artsy people tend to be liberals.

I’d ask her who her friends want to win. It was overwhelmingly the Democrats. I’d see the bumper stickers in the carpool. (As an aside, liberals never have just one liberal bumper sticker. It’s always about 6 or 7 about saving the planet and world peace and Obama or Hilary or Bernie, and usually that coexist thing.”)

“Who do you think is a better candidate, Obama or Romney?”

“Dad! I don’t know! Romney only wants to help rich people and Obama cares about the poor.”

“Hmmm. That’s really interesting. Who told you that?”

“My friends all talk about it.”

“Who told them that?”

“Dad, is that true? Is that what you believe?”

“Bree, have you ever noticed that it’s only Democrats that say such things about Romney?”

“Bree, the big difference, generally, is that Republicans want to lower taxes and encourage people to take responsibility for themselves and figure out a way to pay their own bills and Democrats, generally, think really wealthy people should pay more taxes and help single moms and kids growing up in the inner city.”

“DAD! BUT WHAT DO YOU BELIEVE IS BEST?”

“Bree, both side have so much truth to them. It’s a very complicated question, and if you read Locke or Burke or Rousseau or Mill they talk about these things, but instead of reading them, let’s watch The News Hour on PBS now because they always have people from each side arguing their points.”

“Can’t you just tell me who you’re voting for?”

“My friends hate Obama, he was born in Africa. He’s a Muslim!”

“Do you actually know where he was born? He’s gone to a Christian church for decades and confesses Jesus as his savior… Do Muslims to that?”

“I never said that.”

“Men, my goal is to not think in terms of good guys versus bad guys; I am wanting to learn as much about each candidate, their policies, their voting record. I think it’s very important to research and learn as much as possible.”

I was in third grade. Ford versus Carter. Mr. Voss told us he’d tell us who he was voting for the morning of the election. My parents were staunch Republicans. My dad had been involved in California Republican politics. I had been indoctrinated with very conservative ideology. 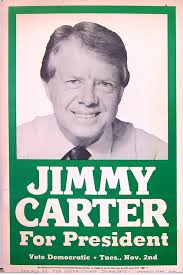 When Mr. Voss bused-out his “Jimmy Carter For President” poster I sat stunned. I’ll never ever forget that feeling. I loved Mr. Voss. But he’s a Democrat! Here’s this 8 year old kid that knew nothing about Carter’s policies or history or anything.

I just new mom and dad were voting for Ford and good people voted Republican.

This year, I’ve broken my silence. The kids are no longer kids.

They now know where I stand. But I have no idea who I’ll vote for.

They wanted me to tell them what to believe.

Mostly, they wanted me to tell them one of the candidates was a bad person.

“Why can’t you be just like all the other parents?”

“It would be metaphysically impossible for me to be just like all the other parents because of Leibniz’s Law about the Indiscernibility of Identicals.

« Are Muslims Worse Than Christians?» And Did You Know…