Why Evangelical Republicans Get Giddy Over Trump? They All Think Alike. 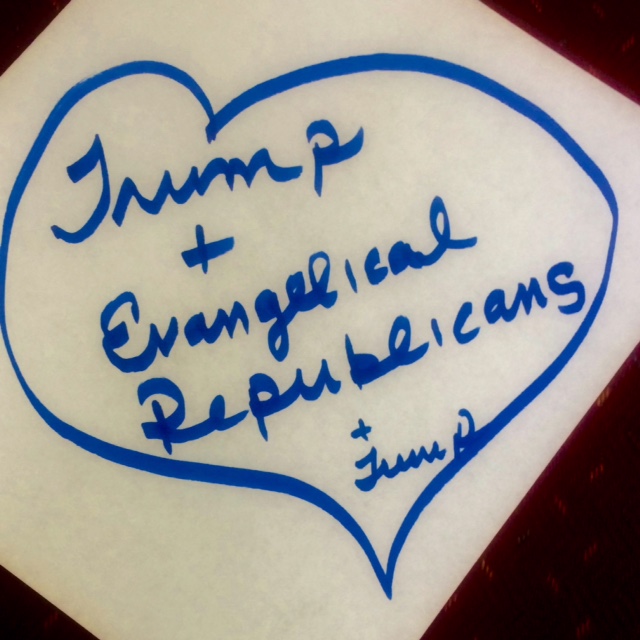 Have you heard? Millions of Evangelical Republicans are joining Trump.

Many political experts are wondering why.

I have a hunch: THEY THINK ALIKE.

First, Trump makes a big deal about how he doesn’t drink alcohol. Drinking is a big moral issue for Trump. I saw an interview where, with all his passion and zeal, he boasted of his teetotalism and that of his children. “WE DON’T DRINK!” Millions of Evangelical Republicans (“ER’s”) are the same. They love to make a drinking a moral issue. It’s a sin. They gossip and look down their noses at all us drunkards, and teach their kids the same. Abstaining from alcohol for Trump and millions of ER’s is a kind of religion in itself, even though The Bible has no problem with drinking.

Second, Trump’s rhetoric is always us versus them. If you just listen, everything reduces to us good people versus them bad people. In my experience, it’s the tendency of many ER’s speak that same kind of language. Not of accepting and including, but of building walls and dividing.

Third, Trump makes a big deal about how Americans are better than all those outsiders. It’s this thing called Nationalism. So Trump and his peeps are ultimately against everyone that’s not like them. We’ve all heard it: Syrian refugees, Asians, Mexicans, Muslims. Trump’s also against losers. And he even goes silent when asked to condemn racism. He would not even condemn the KKK or one of its leaders when asked directly about it on national television. He just avoids issues of racism and prejudice and hate in his campaign.

I spent decades in Bible believing evangelical churches but never really saw its pastors get too upset over things like racial profiling or bigotry or prejudice, in the same way they would about drinking alcohol, or divorce, or abortion, or homosexuality, or pornography, or missing church, or tithing.

Issues of racial equality aren’t a big deal for Trump and millions of ER’s.

Fourth, Trump and ER’s love to tell you what they’re against, but not really what they’re for. They love to scream with passion about what they hate. Bad countries. Bad races. Bad religions. Especially, bad people.

Fifth, Trump and ER’s love to hate those who think differently than them. Especially, Democrats, liberals, progressives. ER’s love to blast Hillary Clinton and Bernie Saunders and any and every Democrat they can.

Sixth, Trump has built his campaign primarily with uneducated Americans. That’s a fact. Like he said after winning Nevada, “I love the uneducated!” Trump understands the huge population of uneducated ER’s, especially in the south. He targets them. He speaks their language: sound bites, rudeness, exaggeration (“disaster,” “horrible,” “stupid.” “best ever,” “worse ever”), third grade vocabulary. And tactics. Call people names. Short. Liar. Loser. “Little Marco.”

Many of the ER’s I’ve known over the years are not educated. This doesn’t mean they haven’t made money. It doesn’t mean they aren’t good people and, in their own trade or hobby, highly competent. It just means they lack a basic political sophistication. It means that listening to Rubio or Cruz or Bush or Kasich talk policy is just too hard.

They don’t think for themselves.

For the life of them, they couldn’t tell you the difference between a Shiite and a Sunni, or whether Thomas Jefferson was a Christian or not. The more I listen to Trump, the more I’m certain that he understands the enormity of the uneducated ER voter population. So he plays tough guy. He’s going to order torturing. He’s going to order murder women and children of terrorist families. He gets the right wing ideology that I hear and read often. The, “Fuck what all those liberal Europeans think…we gotta just blow the shit out of all those bastards.”

Seventh, Trump is admittedly greedy and materialistic and he doesn’t seem to have a problem with it. Consumerism and greed and materialism, what’s wrong with that? Those aren’t sins, drinking and homosexuality and abortion are. I know so many ER’s like this.

Finally, Trump offers quick solutions. Build a wall. Deport 11 million people. Beat China. Beat ISIS. No talk of complexities involved—no talk about how these are complex issues. No talk about nuance. Yep. ER’s are the same. Pray this prayer. Follow these five principles. Give money. Join our team. Us versus them.

The world for Donald Trump and Republican Evangelicals, or Evangelical Republicans, whichever you prefer is about simplistic answers to complex problems.

In the end, I admit, it’s a bit unfair to speak of Republican Evangelicals as if it’s one large group. It’s not. I consider myself Republican. And evangelical. And have many friends and mentors that would agree with everything I’ve written.

So we’re out there.

It’s just that we don’t insult minorities and women and handicap and Muslims.

And who wants to listen to anyone that boring?

« Up For Debate: Talking Politics With Kristen Howerton (Episode 6)» And Did You Know…