That Time When The Pope Joined Me 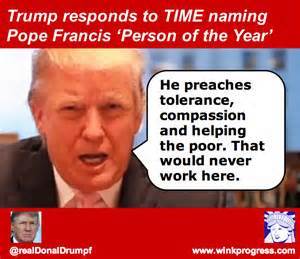 “Trump supporters, talk your Christianese, thump your Bibles, say your prayers, but not sure at all you’re a brother or sister of mine.”

I posted that message on Facebook. Twice. And many commented and sent me direct messages and texts.

How could I be so judgmental?

How could I be so mean?

How could I be so divisive?

I’ve spent my life studying the teachings of Jesus, formally and informally. And undergraduate and graduate degrees in ethics and the philosophy or religion.

Jesus, the founder of Christianity, spent his life building bridges, not walls. He built bridges with women and foreigners and traitors. And he made a career of spending his time with “losers” of his day. His message was considered beyond radical. So counter cultural was his bridge building message that the big wall builders of the day despised him.

They called him a liberal.

And he got killed for it.

If I would have been more thorough in my Facebook posts, I would have asked people how they could support Trump over the otherChristian Republicans. I would have said, “If you claim to be so Christian, how can you support Trump, given his (in word only) faith, over the proven faith of Jeb Bush or Marco Rubio or John Kasich or Ben Carson or Chris Christy?”

Because to be Christan means to follow the teachings of Christianity. It means to do everything you can to spread Jesus’ values: caring for outcasts, looking out for the “losers” of the day, and, yes, building bridges.

Muslims? “They’re not coming to this country if I’m president.” (Republican debate, December 2015)

Jesus even welcomed pagan Romans who were occupying the land of God’s holy people.

I could go on and on.

The point of my posts about how Trump supporters are not brothers or sisters of mine is this.

GIVEN THE THE OTHER REPUBLICAN CANDIDATES WHO ARE DEVOUTLY CHRISTIAN, PEACEFUL (MORAL, ETHICAL, BRIDGE BUILDERS, TRADITIONAL VALUES) WHAT KIND OF CHRISTIANITY DO YOU HAVE THAT WOULD CHOSE SOMEONE LIKE DONALD TRUMP, OVER THEM?

A few weeks go by. Then, to my astonishment, no other than Pope Francis, essentially, echos my message.

He called into question Trump’s faith.

“A person who thinks only about building walls, wherever they may be, and not building bridges, is not Christian…This man is not a Christian if he says things like that.”

I’m proud to say that my thinking was in line with one of my spiritual heroes.

And if you’re going to blast me for being judgmental, I hope you’re prepared to blast Pope Francis also.

« What Happens (Hypothetically) When You Make Your Teens Do Their Laundry» Up For Debate: Talking Politics With Kristen Howerton (Episode V)