The Kind Of Christianity I Want

“Don’t question God, just praise him and trust him in all things”

All that fake Christianity. Happy, clappy, keep it thin, keep it Disneyland.

But I believe, as a consequence of fake Christianity, a generation of people have given up on church. Actually, they’ve thrown away that kind of Christianity.

Mother Teresa will always be known for her unwavering love, and love that sought the very least in the world. I hope that she will also be remembered for her deep and painful wresting–for a very real faith, one that disappeared, often. 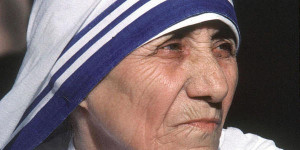 This spiritual giant followed in the footsteps of her savior: caring, sacrificing, drawn to the broken, and brutally real.

Bishop Robert Barron, axillary bishop of the Archdiocese of Los Angeles, was so apt in his recent comments on Mother Teresa’s words:

“‘If I ever become a saint, I will surely be a saint of darkness.’ She was referring to something that only a handful of people knew in her lifetime, that for upwards of fifty years, Mother Teresa experienced the pain of the absence of God. The living saint often felt abandoned by God or even that God does not exist”