What Country Are These Guys Living In?

January 21, 2016 By paulosophia in Politics Tags: my life, politics

I can’t accept it. The doom and gloom. The stuff coming from the top Republican candidates.

What the hell? What country are these guys living in?

I woke up this morning in a warm home with a roof over my head. I put on my new J Crew pants and shirt that I just purchased at South Coast Plaza, a pretty nice and safe little shopping mall. And there was a sale. Happy me: Fifty-percent off the sale price.

I wasn’t woken today by bombs, but by my iPhone. Sometimes I get annoyed with the alarm sound I use and want to use another one but I always forget to change it. The name of the sound I use, if it matters to you, is trill. It’s not very trilling to hear it at 5:30 a.m.

After I got dressed I made a latte. The boys had lots of food to choose from in the refrigerator. I’m not sure what they ate because they don’t really eat much breakfast these days even though the experts swear it’s the most important meal of the day. My kids don’t always care about what the experts say.

I got into the car. I have a car. I drove Elliot to a great school in Irvine. Edison got in his own car and drove to his great school. I got a text from Bree who is in college at her great school.

The streets and freeways were nice and clean and all the traffic lights worked and everything was beautiful and peaceful. A few weeks ago I saw a full rainbow while I was driving on one of our perfect freeways and I clicked a picture. I then got to 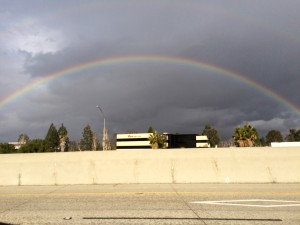 work and the offices were nice and heated and there were donuts and bagels someone brought and life seemed pretty good. And I drank from the water cooler and the water was safe to drink and the bottle said it was fortified with minerals which can’t be a bad thing.

And it’s like this every single day. No bombs. No war.

You know what I mean because if you live in the US and it’s the same for you.

Sometimes I need to pinch myself when I think about how good we have it here. The police to keep us safe. Do you ever just drive down the street and notice how everything works? Where all the water goes when it rains? How the garbage disappears so seamlessly like it doesn’t in half the world?

Oh, and all the food. And the dilemma of whether I should I take care of myself and choose Whole Foods or Mother’s, settle for Trader Joe’s or Sprouts, or slum it at Ralph’s or Albertsons’s or Pavilions or Stater Brothers. Oh, I forgot about Costco.

Gas prices lower that they’ve been in years. And I guess oil’s going to be cheap for a long time. Why did Obama get blamed for high gas prices during the last election if he’s not going to be praised for low gas prices today?

The candidates never talk about all the good stuff that you and I experience every day.

Nope. Instead, they incite fear. Irrational fear. Paranoia. I’m not afraid of how “bad” things are but I’m afraid you might be.

The brute fact is that under President Obama (and Bush and Clinton and Bush and Reagan and Carter and Ford and Nixon and Johnson and Kennedy dot dot dot) Americans have always had it better than most of the world.

I think all the whiner candidates need to go live in Nigeria or The Sudan or North Korea so they could see what a “disaster” (one of Trump’s favorite words to describe our nation) looks like.

The depictions of what’s going on today are grossly exaggerated. And most stupid people don’t have the half a brain required to recognize the scare tactics. The theatrics. Richard Nixon, I suppose, had it right when he said that people are far more motivated by fear than by hope.

Here are a few direct quotations from the last debate.

Trump: “Our health care is a horror show.”

Um, no. Those who have traveled in developing countries like Haiti know what health “horror show” looks like. Sure, the system could be better, but if you end up getting sick, the US is a pretty great place to be. Even under Obamacare.

Dr. Carson: “I mean, just think about a scenario like that. They explode the bomb, we have an electromagnetic pulse. They hit us with a cyberattack simultaneously and dirty bombs. Can you imagine the chaos that would ensue at that point?”

Trump: “Our military is a disaster.”

Nope. We spend more annually on our military than the next 7 nations COMBINED. There is no war here. Yes, threats from two-bit terrorists. But nothing serious like the Cuban-Missile Crisis. Nothing like WWII nor the Vietnam War.

Trump responding to a question of whether he’s using fear to win votes: “It’s not fear and terror, it’s reality. You just have to look today at Indonesia, bombings all over.”

Not all over. And not here. Sure terrorist attacks but mostly against other Muslims in places real far away like Pakistan and Indonesia (which, by the way, has the largest Muslim population in the world, and, did you know it’s not in the Middle East?). Those bombings don’t happen here, people. They happen other countries. That’s a fact. And since 911 less there have been less than 50 deaths by extremist wannabe Muslims on our soil. Take a deep breath, Donald. We’re all safe.

I know some of you are reading this and thinking I’ve become “soft” or perhaps worse, “liberal.” Nah. I just look at reality. I don’t give a damn if I piss of my fellow Republican friends in the process of living in reality.

We all need to contrast the difference between doom and gloom alarmist political tactics, and the fact that life here in America, even under a Democrat leader, is pretty dang good.

« Not Sure About El Nino» Can Muslims Or Atheists Know God?