January 13, 2016 By paulosophia in Spirituality Tags: my life, spirituality

Part of the problem in life is that of organizing stuff. And I’m a single dad, as you probably know, with no wife to tag-team the laundry and closets and refrigerator and mail and and and.

It’s really bad right now with my computers. I have posts and journals and ideas and thousands of priceless photos and you name it on at least five hard drives. Two iMacs. One MacBook Pro. Some Iomega disks from 10 years ago that I can’t open. Some backup CD that I can’t open. And a new Seagate backup hard drive.

The idea was to dump everything on the Seagate then keep the Seagate in the car in case the house burned down. But I’m so disorganized that I lost the Seagate. In the house.

Then within each of these hard drives I have duplicate folders with overlaps galore.

Evernote was a solution for a while. As was Dropbox.

If you’ve never used Evernote I highly suggest that you do. I’m not going to explain it here, but just go download it. Everything I think goes onto to Evernote. 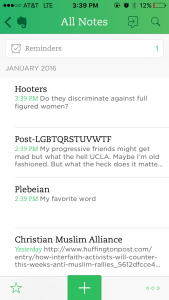 It makes me feel good when everything’s organized in Evernote. Really good.

But the problem now is that my Evernote life is a cluttery as my hard drive life.

Then iTunes and Apple Match. It’s also a cluttery mess and half of the bands I’ve never heard of and Bree or Edison or Elliot put on there from the days when we they were on my account:

I don’t know how to organize stuff. Because I procrastinate. Then it all piles up. And  just throw it all away. Because it’s way too painful to go through it all and make a decision for each and every item.

I was going to end 2015 by cleaning up, organizing, getting rid of all the clutter.

And get rid of all these bands.

But my New Year’s resolution list was too long, too cluttered. So I’m going to add to my current list of 32 2016 resolutions.

“33. Learn to live with clutter and disorder in 2016. Just surrender to it. Acceptance. All that yoga 12 step mindfulness stuff.”

Anyway, I’ll see how it goes.

So far, not too good.

« The Kind Of Christianity I Want» Don’t Give Me No $1.5 Billion