Lots of people believe that all Muslims are terrorists. These people sometimes even believe President Obama is a Muslim. (As an aside, from logic, that would make the President of the United States, also, a terrorist.) 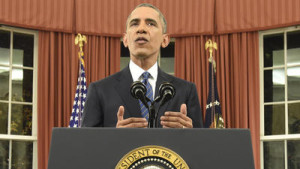 Yesterday, in a speech to the nation, the president said this about the Islamic State: “ISIL does not speak for Islam. They are thugs and killers, part of a culture of death, and they account for a tiny fraction of more than a billion Muslims around the world — including millions of patriotic Muslim Americans who reject their hateful ideology.”

If President was a Muslim, one must ask, how could he say things like this about his fellow Muslim brothers and sisters?

« Don’t Second Guess» Trump Supporters, You’re No Brothers Of Mine