Don’t Helicopter Parent And You Get A Real Helicopter

Last night Elliot was “rescued” in the hills west of the 241 Freeway by the Anaheim Police and Orange County Sheriff. It was dark. They needed a helicopter to find him.

The ordeal began when he texted me yesterday afternoon. I was working in San Clemente. He asked if he could ride his bike to his friend’s house in Newport Beach. We live in Anaheim Hills. Elliot had never rode his bike outside the neighborhood. I first said “no.” He texted “why?” Then I thought for a second. A 20 mile bike ride is just really a series of shorter rides. It’s like letting your teenager ride to a friend that lives 2 miles away, for 5 days.

Then my thoughts went on.

Most of the kids in the world ride bikes for hours and walk for hours and it’s been that way for hundreds of years… you never hear about 14 year old kids getting kidnapped unless you watch the stupid-ass local news and it’s always a relative… we live in the safest place…the homicide rates are the lowest they’ve been since 1990… you’ve gotta let your kids get out of the f***ing house and go on an “adventure” once in a while… and isn’t it amazing that having your near 15 year son ride his bike in posh Orange County California during the day in Anaheim Hills and Tustin and Irvine and Newport Beach is considered by many parents today to be considered an “adventure”?

Anyway, before he left, I took all the precautions to make sure he’d survive the potential perils of riding your bike. Make sure your iPhone is charged and you keep the ringer on. Make sure the tires are inflated. Make sure you ride in the bike lane. Make sure you wear your helmet. Make sure you stay east of the 55 freeway. (I didn’t want him to veer into Santa Ana, where he might be murdered. Even though his brother goes to school at Mater Dei, in the heart of Santa Ana.)

Right after he disembarked, my youngest sister, Teresa, who lives one door down with her husband and teenagers sent me a text. I could tell she was probably concerned.

“Raindrops and 52 degrees and Elliot is riding his bike to Newport Beach?”

Me: “This is summer for most of the country :)”

Teresa: “In a t-shirt and jeans holding a jacket and a helmet.”

I get Teresa’s worry. She’s a good mom. A normal and caring mom. But I’m just not sure that kids die of cold here in Southern Cal and I heard recently that you don’t’ even get sick from cold; you get sick from coming in contact with a bacteria or virus.

So I called him about 20 minutes after he left. He said he was in “some rural area,” on some path, going up a steep hill. He then informs that he used some GPS app and it took him not around the hills of Anaheim and Orange, but THROUGH them. I assumed the flipping GPS thingy would take him down Santa Ana Canyon Road, into Tustin, into Irvine (one of the safest cities in the US), etc.

I told him to send me his location. I didn’t recognize any of the streets because he was miles away from streets.

Then the rest happened in a flash.

I call him again.

“Do you know where you are?”

“There’s nothing out here. Just some small trail.”

“Are you at the bottom of the hill?

I breathe. I recite all my thoughts about homicide rates being low and all that.

(Honestly, there’s a war going on in my mind. On one side all the statistics. All the facts. He’s totally fine. It’s brute irrationality to be worried. He has a phone. He’s in Orange County. On a nature trail. On the other side, the 1/10,000,000 chance of a murderer, or serial rapist, or mountain lion finding him. Back and forth and back and forth, facts versus irrational feelings, facts versus irrational feelings.)

I wait about 15 minutes and call him again.

Elliot, calmly, “I don’t think I know where I am.”

Paul, mild stress, “Can you find your way back home.”

Elliot very calmly and with an almost mysterious tone in his voice, “I’m pretty sure. It’s super quiet out here.”

Me with a sense of urgency, “Okay, go back now and send me your location and keep your phone on.”

Elliot, reflectively, with a sense of triumph and confidence,“Dad, can I hang out here for a few hours? It’s so cool.”

Four minutes later. He texts me. 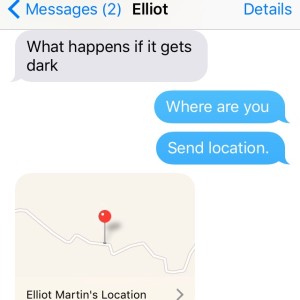 It was already dark.

I realize I need to call the police. Ask their advice. Not because Elliot’s in grave danger. I keep assuring myself of the facts. But if his phone died, and he got lost, and it would be in the mid 30’s in those hills, and all that, something could go wrong.

The officer tells me to have him call 911 so they could get his location via GPS.

Within a few minutes my phone is ringing. I hear a helicopter. “Mr. Martin. We’ve dispatched officers on both ends of the trail and have his GPS coordinates and our helicopter is trying to locate him.”

And then they called a few minutes later and had him.

He sends me this photo.

Why the heck would he want to go home?

In a country that is riddled with chronic anxiety and worse case scenario thinking, this incident is considered a “close call.”

But in most countries when you’re exploring in the hills at dusk it’s called living. And when a 15 year old boy is living, there’s no need to “rescue” him; you rescue people who are on the verge of dying. Plus, in other countries, there’s no 911, anyway–no squad cars and search helicopters and rescue dogs. No GPS tracking devices.

I have no regrets. None. Hearing Elliot’s voice. Hearing the sweet sounds of adventure. Experiencing my curious and ambitious teenager exploring the world around him, wanting to flap his wings a bit, etching a memory into his mind—one that he would have never had had someone, “safely,” taken him to Newport in the car with airbags and seat belts.

And hearing him tell the story later that night. Of getting lost in the middle of nowhere. Of his name blaring from a police helicopter. Of the beam of light illuminating everything around him. Of the dogs barking from hundreds of feet above him. Of being driven home in a police car and getting to interrogate officers about what they do.

Some of you disagree.

For me, I refuse to have irrational fear determine how I raise my kids. I refuse to sequester my teenagers–who for most of history raised families and fought in wars–to the couch or some sports field or carpool lane where mommy and daddy could keep them “safe,” based on one in a million worse case odds, chronic paranoia, the crap you see on the local news.

I will live my life without paranoia. I want the same for my kids.

Yeah, my kid got rescued by a helicopter last night.

That’s the kind of stuff that happens when you refuse to be a helicopter parent.