Where Are All Those Terrorists?

I think today’s hype and paranoia over terrorism has less to do with real dangers and more to do with an paranoid society that is fed by sensationalism in media.

The shooting in San Bernardino was horrible. Deplorable. Just flat horrific. I grieve with the families who lost loved ones. God help them in their grief.

But all this hype? Banning Muslims from entering the country? Give me a break. The chances of dying in a terrorist attack in the US by a Muslim are pretty much zero. I know, I know, ISIS is at war with us. They’re coming our way. It’s just a matter of time.

But, think with me for a minute. Consider what happened after 911.

In 2003 I participated in a terrorism forum at UCLA. It was led by two experts. Paul Bremer, who would lead the war effort in Iraq under President George W. Bush and James Woolsey,  former director of the CIA. Bremer was a leading counter terrorism expert. He had worked under Henry Kissinger, appointed Ambassador-at-Large for Counter-terrorism under President Reagan. All the news networks were there. The room was packed. Compelling information was presented to an anxious group of faculty, students, and the greater Los Angeles community.

The next attack would come at any time.

Because I don’t buy into paranoia. I’m more interested in facts. And reality. And the reality was that every single day—EVERY SINGLE DAY FOR YEARS—you would see these threat level alerts on 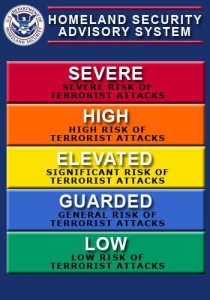 TV. Remember? There was this little image at the bottom of the TV screen. It stayed there while you watched the news. Green meant low risk, but you never saw green. Yellow meant the risk was “elevated.” Then orange and red and I remember seeing that often.

The country was paranoid because they were being fed by certain politicians and the media.

(And I’d drop off my daughter at school and all these moms would say things like “Oh, it’s so scary…all those Muslims…all those terrorists…I’m afraid to bring my kids to school because I heard on the news that they might target schools…this world we live in so crazy…we’re not safe anymore…I’m not sleeping at night…” Some of my Christian friends would talk about how we’re living in the “end times.” And I’d talk to the dads and a lot of them would say things like “What a bunch of assholes…those fucking losers…we ought to bomb the whole goddamn middle east…we ought to deport all those fucking towel heads…”)

After 911, Osama bin Laden sent warnings. Islam was at war with America. The next attack would make 911 look small. Before Christmas in 2002 he released an announcement. Al Qaeda would be delivering a “Christmas present” on our own soil.

But even with all the hype and all the alerts, nothing happened. The sophisticated covert strategic entrenched terrorists—millions of Muslims who call the USA their home—didn’t even vandalize a building.

I get the microphone.

“You speak of how remarkably sophisticated their network is.”

“You talk about how they are already living here in the US.”

“We’ve been warned by the Bush administration, on news channels, and tonight by you, for nearly two years.”

“BUT NOTHING HAS HAPPENED.”

“If the country is swarming with this sophisticated war machine of radical Islamist jihadists, they either are not as angry with us as you think, or they don’t possess the sophistication.”

Secretary Bremer responded. “Well, ahem, they are remarkably disciplined and strategic. They time their attacks to have maximum impact so we need to be prepared.”

Of course, we give credit to public servants: the various national, state and local agencies. And our allies around the world.

This post is not to deny the real dangers of Islamic extremism.

This post is to show that since 911 all those countless “terrorists” living here haven’t done much. A few shootings here and there.

In fact, since 911 around 50 Americans have been murdered in the US by Islamic extremists.

Since 911 over 150,000 Americans have been murdered in the US by citizens without any ties to Islam. Many of these murderer called themselves Christians. Most used guns.

The truth about Muslims in the US is this. They’ve lived here for decades. Millions of them. Immigrants. Egyptians. Iranians. Syrians. Saudis. Iraqis. Etcetera. In every city. Attending Mosque. College students. Business owners. Working for city governments. Strong families. Raising their children. The children play soccer and do ballet and go to university. They go to school with your kids. They all play on the playground together. They are doctors and restaurant owners and accountants. They are lawyers and own gas stations. They pay taxes.

Thousands fight in our military—fight against other self-proclaimed Muslims who have tried to hijack their religion.

Many American Muslims have died defending our country. Muslims have fought in all major US wars including the Civil War, WWI, WWII, the Vietnam war, and the Gulf War. More than 3,500 Muslims fought in Iraq and Afghanistan. High ranked members of the U.S. military have commented that Muslims are a crucial part of the US armed forces because of their cultural understanding and linguistic skills and cultural understanding.

We need to think about the facts, people.

Because paranoia is easy.

And so is blame.

« Should You Let Your Kid Quit?» That Rat Race We All Run.