What I Did To Get My Kid To Win

Edison won an academic award a few weeks ago. It was a big deal. Huge. I want to give parents a tip on what I did to get him to win this distinction.

He was one of only 40 students. Out of over 2,000. Top 2%. These students had the greatest improvement in their grades over a one-year period. There was an award ceremony: school president, principal, senior staff, heads of departments. The principal spoke. Some students moved grades from 1.5 grade point average to 2.0, some form 4.0 gpa oa to 4.5. That kind of thing. 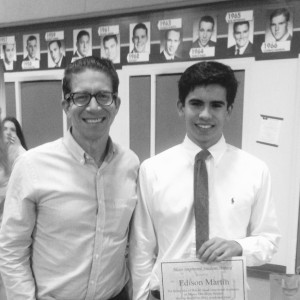 I sat with all the proud parents. Clicking away on our cameras. I thought about how I never received any award in high school because of my fortitude and capacity for consistency—I held about a 1.8 gpa, all the way through.

I sat there and thought about how, three years earlier, I found myself caught-up in the obsession. Many of us parents have it. We refer to it as education but has little to do with learning. I sat and thought about the vision I had when my kids were younger. I wanted them to be “ahead” of everyone else. That was my goal, though their mom was always far more balanced.

So when Edison entered high school, I hired a college counselor who had helped parents get their teenagers into Princeton and Harvard. She helped confirm the carefully written plan I had devised for my 14-year project, through my own research. All the hoops to ensure his future success: extra circulars, sports, starting a club, academically challenging classes, Latin, be the team captain, get on the good side of the best teachers because they will write a letter of recommendation when you apply to college.

I knew what quizzes were coming, tests, projects. I obsessed and I was super stressed-out about each of them.

I obsessed over the iPad. The iPad the school gave him, The iPad he needed for every class. The iPad I stripped of games and social media apps. The iPad he could message friends on because Apple doesn’t let you delete its texting app, Messages.

I obsessed over his internet browser. He needed one for school. I downloaded some mobi-something-or-rather browser. It had a filter. Safari didn’t.  He’d text me during class almost every day. “Dad, I’m supposed to be downloading a PDF right now but this broswer isn’t letting me because it’s blocking the site.” I’d send him the restrictions passcode so he could download Safari and work on his project.

“Dad, everyone else has Safari, this is so awkward.”

I called the IT department of the school almost every week. “You mean to tell me that of the 2,500 students, I’m the only one that doesn’t let his kid have Safari and other apps?”

“Well, Mr. Martin, I can’t speak into what other parents do, but in order for him to download class assignments at school, he’s going to need a different browser.”

When I saw him after school I’d get rid of Safari and change the restrictions passcode.

This happened almost daily. I started running out of ideas for passcodes. At first I started with the month and the day. So if it was Septmeber 25th, I’d write 0925. But then a few days would go by and I’d forget if it was 0924 or 0925 or 0926. I tried to make it simpler—the first four numbers corresponding with the first for letters of the current month. So Novermber would be 6683. I think I tried using day and month of the kids’ birthdays too.

I ended up having to erase his iPad a bunch of times to get new apps he need for class and he wasn’t happy.

And he didn’t always turn in his homework on time. I knew because, remember, I checked Aeries. Every day. And I’d ask him why and he had a soccer game and had to leave early and he had spoken with the teacher. I was treating him like a five year old.

And I looked over his shoulder, literally, at home to make sure he was on task. And I’d tell him the BS parents us tell our kid-projects: “I just want what’s best for you.”

In reality, I wanted what’s best for me.

Month after month, I hounded him, grounded him, lectured him. He needed a only a 92.5 on every assignment. That’s it. That gets you A’s. Not A minuses. And A’s get you into top universities.

He wasn’t getting only A’s.  I wasn’t happy.

“I want you to do your homework at your desk so I can see you are working and not…wait!, how did you get Instagram?”

“You gave me the passcode today so I could download Safari, I was just checking something.”

I read Friedman. Forty years of counseling chronically anxious families. “The children who end up being able to work through the latter difficulties in life are those parents who made them least important to their own salvation.”

It all came crashing down. It came crashing down because I was objectifying my son. Parents do this today all in the name of love with quantifiable performance measures for school and sports and whatever else activity.

Edison had become a means to and end. HE HAD BECOME AN OBJECT I COULD MANIPULATE OUT OF MY NEED TO HAVE HIM “SUCCEED.”

And I realized the whole top university thing was never about the goals or dreams or ambitions of kids. It was something parents wanted, like a Mercedes Benz or trendy vacation destination or designer handbag. Some call these kinds of things “positional goods”—things you get so you can impress others.

I later heard of a popular book called Yes, Your Teenage Is Crazy. I’ve raised one teenager and am currently raising two, and when I saw the title I thought, in actuality, it’s the parents who are f***ing nuts.

But blame the craziness of your obsession and lust for status symbols on your kid.

Success is about pursuing truth and honesty, helping others, finding your passions and living YOUR dreams, not those imposed on you by the vulgarity of this phony culture of facades.

I have a degree from one of the most prestigious universities in the world hanging on my wall and it doesn’t mean shit.

But how I treat my kids matters more than anything.

I happened upon Natalia Ginzburg. Her views on education. How wonder and learning and imagination are the most beautiful intrinsic goods. And she said this, too:

“We should not demand anything; we should not ask or hope that he is a genius or an artist or a hero or a saint; and yet we must be ready for everything; our waiting and our patience must compass both the possibility of the highest and the most ordinary of fates.”

“Edison, you need to know something. I love you. Not your grades. Not your school activities. I could really give a rip about any of that crap anymore.”

He looks at me, startled, perhaps frightened.

I go on, “I was a disaster last year. Our relationship was tense because I was treating you like some kind of object. I needed you to pump out A’s and ‘succeed’ because that made me feel better about myself.”

He looks at me, speechless.

“Education is about wonder and learning, not just finding all the tricks to get high grades.”

“Oh, and Edison, you don’t have to go to college.”

“I love you for who you are, no matter what you decide to do with grades or soccer or your school club.”

“Nothing you do or don’t do will ever cause me to love you less, not even average grades.”

“Pursue your passions and interests, I want to see you become who you want to be. A college degree opens doors for sure, and if you decide to go, I’ll support you in every way I can, but it’s your life.”

“And education today has been hijacked by parents like me who treat it as a status symbol so we can brag to our friends.”

He finally, with a calmness I had never heard before.

“Okay, that’s fine. But whatever you decide, I’m not going to pressure you anymore.”

I never looked at his grades again. Not in his sophomore year, not in his junior, not this year. Not once. I never asked him about tests or quizzes or homework. Not once.

But when he got home I asked him about his day. “Learn anything interesting?” I did go to some soccer games and tennis matches and Mock Trial competitions. But I never encouraged him or helped him or “advocated for him.”

I just enjoyed what he was doing in life.

It’s been the most joyous time together.

And when I heard he got this big award. I decided to write about it.

So, what did I do to encourage my son to win this prestigious academic award?

The award was big. Huge. Because he did it on his own. All on his own.

I’m so flipping proud of him.

Doing nothing might be the best way to encourage our kids.

Plus it’s a much better way to have a peaceful home.