Is Philosophy More Dangerous Than Welding?

November 13, 2015 By paulosophia in Uncategorized Tags: my life

I’m not a welder but I’m convinced that philosophy is far more dangerous. I know because I am a trained philosopher with two philosophy degrees. Bachelors and Masters — 5 of my 7 years of formal 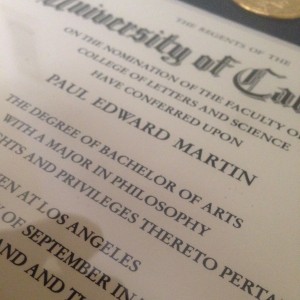 education reading Aristotle and Kant and Russell and Kripke and learning about “things” like causation and deontology and the
metaphysics of modality. All of this formal study in philosophy happened after I turned 30, when I became increasingly aware of how little I really knew.

Marco Rubio thinks I should have studied welding instead. Last week during the debate, he took a shot at us philosophers:

“Welders make more money than philosophers,” the Florida senator said, making the case for an expansion in vocational training. “We need more welders and less philosophers.”

Of course it was a stupid thing to say. Many do a degree in philosophy and go do other stuff: George Soros, Steve Martin, Carly Fiorina, Phil Jackson, Peter Their (Paypal co-founder).

But I get why Rubio made the dig about philosophy.

First, it’s easier to think that working with your hands is real work, and working with your mind isn’t. “Real men work with their hands.” (If you’re one of those macho guys, I dare you to try writing an article like this one. I’d rather go dig a hole any day. Way easier.)

Second, our society is addicted to safety. And philosophy is dangerous. Far more dangerous than welding. Rubio’s a pragmatist. Play it safe. Get a job. Make money. And be careful not to think too much.

Third, nobody really gets philosophy. They don’t know what it even is. Just the word philosophy makes them confused. But everybody gets welding. You melt metal. You get paid for it. If you say you’re a welder or accountant nobody gets that awkward look. And if you say your hobbies are dirt bike riding or surfing or scrapbooking, it’s all good. But if tell someone your hobby is philosophy, most don’t know what to say next. Trust me, I know.

Fourth, Senator Rubio didn’t compare welding with other college majors. He didn’t mock those pursing business or computer science or nursing or biology or law — degrees with an specific end in mind. That’s because education today is seen merely as a means to an end — something you hustle through with your good grades and good test scores and “top universities” so that you can finally get into the “real world” and get a job and make money.

It’s the parents who are to blame for doing this to their kids.

Finally, we live in an anti-intellectual society today. So a major that is just about knowing and thinking and truth seems absurd. Our education system over the past 50 years has shifted. How many students do you know that say, “I’m going to college because I want to expand my mind, learn what I don’t know, become a better thinker, develop my intellectual capacities”?

How many follow in Dr. King’s vision? “The function of education is to teach one to think intensively and to think critically. Intelligence plus character – that is the goal of true education.”

I’m no welder, but I do often prefer the company of blue collar workers. They’re usually more humble. And people with money usually mix up being clever with being smart. (If they had read Aristotle, they would have known that even thieves are clever.) Many “professionals” bore the hell out of me. I’ll have a beer at a dive bar with a welder any day over a round of golf with a stuffy yuppie.

(I like the way stuffy yuppie sounded and I think it’s an assonance and only geeks like me would even care.)

And I can’t express the insight and wisdom I get from “uneducated” people. Especially my dad, who dropped out of high school. It doesn’t take a college degree to be smart. Consider Abraham Lincoln or Steve Jobs.

But if I had chosen welding instead of philosophy, I’d surely have better job security.

But there’d be no Paulosophia.

And who’d want that?

« What Sometimes Happens When You Encourage Your Kids» What My Mind Did This Morning At Around 2:45.