What’s going on? All these religious bigots. Even Christian ones. Real, living, breathing, convinced, head-in-the-sand, zealots. Right here in the United States of America. A nation founded on the idea of freedom of religion. A nation founded on the ideal of religious tolerance. A nation where countless willfully died to create a nation where men and women could worship, or not worship, feely.

Well, it’s been happening for years.

But, today, I got this zinger on my old Facebook page. 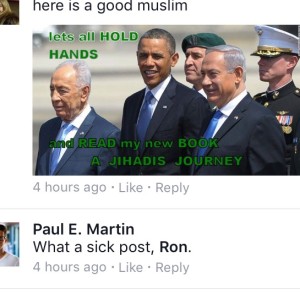 YOU’VE GOTTA BE F***ING KIDDING ME.

I called it sick before I could think. And it is sick. Sickness is a word used to describe illness — when something is wrong. When health is compromised. In this case, mental health. Reasoning. Rationality.

To those right-wing nut jobs — not fellow Republicans, but the loonies out there — who hate President Obama’s positions, do me a favor. Disagree with his political ideology. Chastise him because he’s a democrat (since everything democrats do is wrong). Express your views on why you disagree with his policies.

BUT DON’T CALL HIM AN ISLAMIC JIHADIST.

Islamic jihadists don’t order the killing of the leader of the most pernicious terrorist group in the world, Osama bin Laden.

Islamic jihadists don’t send our troops into wars against against the Taliban, as this president has in Afghanistan.

Islamic jihadists don’t bomb the hell out of ISIS fighters with drones, as President Obama has been doing for years.

The guy who posted the photo forgot a few other things.

He forgot what our nation’s leaders have said about Islam including neoconservative hero, George W. Bush:

“The terrorists are traitors to their own faith, trying, in effect, to hijack Islam itself. The enemy of America is not our many Muslim friends; it is not our many Arab friends. Our enemy is a radical network of terrorists, and every government that supports them.” (George W. Bush)

“The United States of America…has in itself no character of enmity against the laws, religion, or tranquility of Muslims.” (John Adams)

“Here in the United States our Muslim citizens are making many contributions in business, science and law, medicine and education, and in other fields…[they are]upholding our nation’s ideals of liberty and justice in a world at peace.” [Islam] inspires countless individuals to lead lives of honesty, integrity, and morality.” (George W. Bush)

“Some of the comments that have been uttered about Islam do not reflect the sentiments of my government or the sentiments of most Americans. Islam, as practiced by the vast majority of people, is a peaceful religion, a religion that respects others. Ours is a country based upon tolerance and we welcome people of all faiths in America.” (George W. Bush)

He forgot what President Obama said about his Christian faith:

“More than 2,000 years ago, a child was born to two faithful travelers who could find rest only in a stable, among the cattle and the sheep. But this was not just any child. Christ’s birth made the angels rejoice and attracted shepherds and kings from afar. He was a manifestation of God’s love for us.”

And he forgot what President Obama has said about military force in the speech after receiving the Nobel Peace Prize — a speech praised by neoconservative Republicans:

“I face the world as it is, and cannot stand idle in the face of threats to the American people.”

“So yes, the instruments of war do have a role to play in preserving the peace.”

“I face the world as it is, and cannot stand idle in the face of threats to the American people.  For make no mistake:  Evil does exist in the world.  A non-violent movement could not have halted Hitler’s armies.  Negotiations cannot convince al Qaeda’s leaders to lay down their arms.”

“The United States of America has helped underwrite global security for more than six decades with the blood of our citizens and the strength of our arms.  The service and sacrifice of our men and women in uniform has promoted peace and prosperity from Germany to Korea, and enabled democracy to take hold in places like the Balkans.  We have borne this burden not because we seek to impose our will.  We have done so out of enlightened self-interest — because we seek a better future for our children and grandchildren, and we believe that their lives will be better if others’ children and grandchildren can live in freedom and prosperity.”

I hate the hate coming from religious bigots.

I guess that might make me a hater, too.

« Free Will, Firemen, And A Ballerina, At Kéan» Christmas Card Love