I Let My Son Go To Camp Flog Gnaw.

I let Edison spend the weekend in LA at a “carnival” called Camp Flog Gnaw. He left Saturday morning. The event started at noon, to be held at The Coliseum, to be attended by tens of thousands. He stayed the night with three friends at his sister’s apartment at UCLA. After he drove away, I got this text. 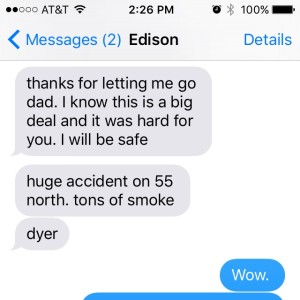 In spite of his assurance, I was still nervous. All day. All night. In LA. At a rap festival.

That voice in my head — “Paul, he’s still a minor child.”

Some of you will think I’m a negligent parent with my head in the sand. You might be an evangelical Christian. You might believe it’s the duty of parents to protect their children, even if those “children” are nearly 18. These concerts are carnal, you say. Bad influences. “Kids” will get into trouble.

Others will think I’m a paranoid parent with my head in the sand. You question why I would try and control a young man who is 6 months away from legal adulthood. You think kids gotta grow-up at some point, and it’s our duty as parents to let them and reap the consequences of their choices. It’s just a stupid concert. Let him go.

Originally, Edison asked if he could go to Camp Flog Gnaw a few months ago. “Hey, Dad, I’m almost 17 ½, can I go to this all day and night concert in LA in November?” After weeks of indecision, and weeks of him reminding me of his age — “Dad, seriously, I’m almost 18!” — I relented. I said okay because last year he wanted to go to a music festival in the Coachella Valley. (I forgot the name of it. Not Stagecoach, the other one.) He wanted to spend the night out there at some house with his friends from high school.  I said no.

So I felt I owed this one to him.

So, here are pretty much the exact thoughts that bounced around my mind in favor of saying no:

2. The creep that created Camp Flog Gnaw is 24 years old.

3. I don’t like rap. It’s not real music. If it was a country music carnival I’d feel better about it.

5. The names of the “bands” or rappers or whatever are weird. 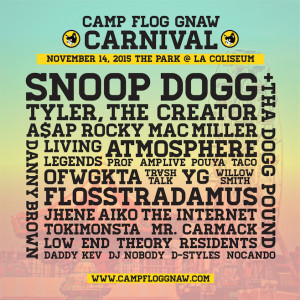 7. Sex. People have sex when they do drugs and alcohol.

8. My Christian friends will judge me. Especially the parents who have kids that listen to Christian music and only let their 17 1/2 year olds go to Christian concerts.

9. My kids don’t like Christian music very much. And that’s my fault.

10. If something awful was to happen, I’d second guess my decision. So would all the parents that think I had my head in the sand.

And here are pretty much the exact thoughts that led me to say yes:

1. I believe in operating from a place of trust as a parent.

2. I will not allow fear to govern my life. And I won’t make decisions based on worse case scenarios because that’s no way to live.

3. I think too many parents infantilize their kids today, even their 17 1/2 year olds.

4. I don’t want my kids to rebel later in life because I shielded them too much. I’ve seen that happen far too often.

5. I don’t want my kids to lie and hide where they go because I’m too strict. I’ve seen that happen far too often, too.

6. I don’t believe in a “teenage brain.” Robert Epstein, a Harvard teen psychologist, debunked that myth. And,  for most of history, teenagers had families, fought in wars, and held jobs. The whole teenage brain thing is a bunch of crap.

7. Drugs are on every high school campus in Orange County, not just at Camp Flog Gnaw.

8. Edison is old enough to make his own decisions regarding sex and drugs.

9. I want my teenage boys to be in the real world, and not only in an evangelical Christian pseudo-world that is produced and governed by the fear of chronically anxious parents.

Next year he can decide for himself because he will be away at college.

And I’m glad about that.

« What My Mind Did This Morning At Around 2:45.» Free Will, Firemen, And A Ballerina, At Kéan