I ask because earlier this year I started playing in a band. We play old hymns. In bars. It’s called “Beer and Hymns.” Once a month, hundreds show up and for three hours sing spirituals with a 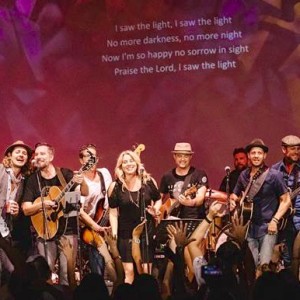 kind of abandoned enthusiasm that rivals any conference I played back in the glory days of The Vineyard, or concerts I’ve played with my gifted worship leader friends Matt Redman or Tim Hughes.

And I’m nearly certain that some have a problem with Beer and Hymns.

So to you who think drinking is wrong, or drinking in a bar with hymns being sung, will you consider with me?

Because this issue of drinking — not for Roman Catholics, but for Protestants — remains one of the most controversial topics in the American church landscape. It’s also one of the reasons I’m often drawn back to my Roman Catholic roots.

And the fundamentalist and evangelical Christians perplexe me the most. These are the ones that hold up the Bible. Wave it in the air. “The Bible says it, I believe it, that settles it.” Sola Scriptura.

The Bible-only people are the ones who want to set up a standard of living based on what the Bible says.

And the Bible don’t say that drinking is sin.

So why do so many Christians treat drinking like murder?

For me, the things that stumble me are self righteousness, prejudice, consumerism, materialism, greed, and gossip. You rarely hear people complaining about those.

And those sins stumble me the most when I see them in myself, which is far too often.

Anyway, we’re all going to get bothered over alcohol?

Maybe my liberal position comes from my Roman Catholic roots, where drinking isn’t really an issue. And today I’m largely amongst Protestants. And Protestants have been protesting drinking since for the past few hundred years. Today, some protest drinking in the wrong place, with the wrong people, singing the wrong songs.

Maybe my position comes from growing-up in an enormous Italian and Mexican Catholic family with near weekly infant baptisms and first holy communions and confirmations and weddings and funerals that were all followed by a day of eating and laughing and grandparents and aunts and uncles and cousins and godparents. And booze. The way Christians have celebrated since the New Testament.

I miss those days like nothing else and I still get nervous to go to any Christian celebration that only serves coffee and punch.

Maybe my position comes from the fact that my Dad made wine during most of my childhood. Hundreds and hundreds of gallons, year after year. And my Italian grandparents gave us peaches in a glass of red wine. All the time. Instead of ice cream. Starting before kindergarten.

Or, maybe it’s because I’ve traveled and lived overseas and know that Christian aversion to drinking is largely an American phenomenon. I remember my first ecumenical conference in Bern, Switzerland in 1993. Thousands of evangelical Christian leaders. Conservative, Bible based, mission-minded pastors. At the end of the first main session everyone walked to the back of the huge convention hall where alcohol was served in the same way the equivalent conference in the US would serve Coke and Coffee. I almost passed out.

Were these European evangelical Protestants wrong?

Are the Catholics wrong?

« Why Do White Males With No College Degree Support Donald Trump?» Save Your Kids — Ban Halloween