Save Your Kids — Ban Halloween

No halloween for millions of kids this year. Instead,  a “Harvest Festival,” the Christian alternative.

Many parents think the Harvest Festival is better; the kids will prefer the cookies and punch and games.

I doubt it. The parents I’ve spoken with over the years think it’s better because is safer.

But it’s not. Trick or Treating is no more dangerous than playing on the playground where, according to a 2014 study by Children’s Safety Network, each year, over 200,000 kids visit the ER. Fifteen of them die.

Only once has a child died from eating poisoned Halloween candy. And it didn’t com from a stranger. It was planted by an 8-year-old boy’s father in 1974, in an attempt to get the child’s life insurance money. The convicted murderer, Ronald Clark O’Bryan, was executed in 1984 for the heinous act. There is a small chance the kids could get hit by a car. About 5 kids die each year in accidents related to Trick or Treating. But, again, if you’re going to keep your kids inside based on one-in-twenty-million odds, then no more bike riding, no skateboarding, and no more sports.

Some parents think, especially evangelical Christian ones, that the Harvest Festival is safer — safer from a spiritual standpoint.

I’m not convinced. I took all my kids Trick or Treating. Every year. Me and their mother. In our neighborhood. It was great family fun, partially because we all got 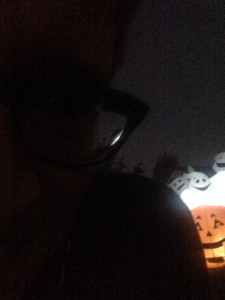 to actually meet some of neighbors (oftentimes a rarity in Orange County, California). We did attend a few church “Harvest Festivals,” but never as a replacement from knocking on doors on October 31. Of course, there was never any candy laced with cyanid.

(Confession. Brainwashed by the notion that “trick or treat” had some mysteriously evil connotation, we taught ours to only say “treat or treat.” In other words, no tricks for the Martin kids. I felt so much safer, though most of the neighbors shot us all a strange “um, okay, whatever” look.)

I could never think of any rational reason for banning them from Halloween tradition I so enjoyed every year as a kid.

On the spiritual end of things, as far as I know, they devil didn’t win their respective souls because they all have retained their Anglican faith, and are pretty dang outstanding kids today.

As an aside, my boys have attended parochial school most of their lives. Catholic school. You know I like to observe the differences between Catholics and Protestants and another big difference is Halloween. Even the teachers dressed up as witches and warlocks and the school was draped in every kind of (evil) decor.

Not the case at the Protestant Christian schools where Halloween was banned.

For these parents that fear the evils of Halloween, their reasoning is based on a philosophical dualism — in this case, a matter of replacing the “secular” with the “sacred.” People who think this way have lots of black and whites in their lives. Dualisms make it easier to think about complex things — there are few gray areas when everything is black or white, evil or good. So replace halloween (secular) with a Harvest Festival (sacred).

One could attribute this mindset largely to a guy named Plotinus. Christian dualism was largely his third century idea.  He blended Plato’s philosophy with Christian theology. Lots of black or white. Lots of either or or. Lots of good or bad. For Christians, a separation from “worldly things” versus “spiritual things.” Plato did the same thing hundreds year earlier.

Fast forward about 1,700 years and you have parents today giving their kiddos a Christian alternative for what “the world” has to offer them. Many parents do the same with music and other forms of entertainment (Christians music, Christian books, Christian T-shirts, etc.).

But I can’t help but wonder why — on what rational grounds — any parent would ban a child from the fun of halloween.

« Satan Sauce, Devil Juice, Beer, and Hymns.» I Don’t Know Why But This Is About As Funny As It Gets